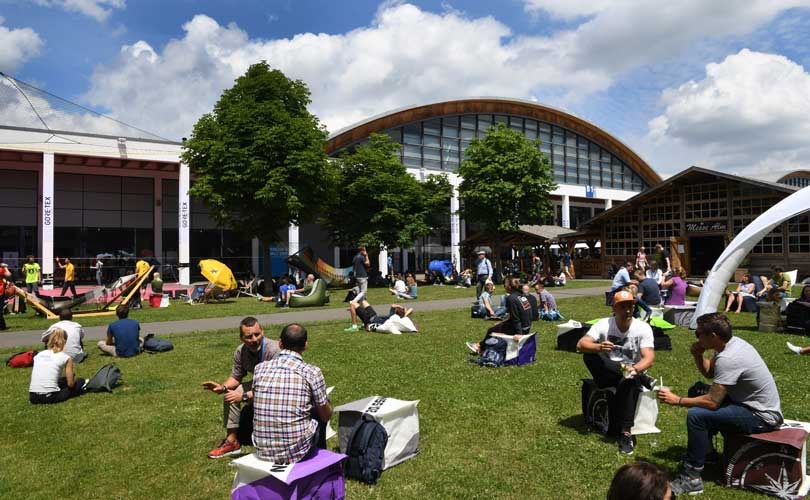 The recent anniversary event marking the 25th anniversary of the OutDoor fair in Friedrichshafen was also its last. From next year onward, Messe München will host the OutDoor show. Accordingly, the mood alternated between melancholy and upliftment.

OutDoor will be OutDoor by Ispo

The 25th edition of OutDoor in Friedrichshafen was supposed to be a party. According to its motto "OutDoor for All," Messe Friedrichshafen wanted to bring everyone together this time: industry, commerce and consumers. Thus, events were not only organised at the OutDoor exhibition grounds but also in the city. A highlight was the German DAV Boulder Championship in Hall B5 at the exhibition center, which attracted several hundred Boulder fans the previous day and on the first day of the fair.

That the jubilee fair is now the last of its kind in Friedrichshafen has only been known for less than half a year. At that time, a majority of the members of the European Outdoor Group (EOG) decided in a secret vote to change over to Messe München, where the OutDoor by Ispo will take place for the first time in the summer of 2019. Christian Schneidermeier, CEO of Ortovox, said: "For me personally, it is a pity that it was the last time in Friedrichshafen. Here on Lake Constance is a beautiful location and a great atmosphere. In our industry, it's all about emotions and that has always been right over here.“

Friedrichshafen is planning its own outdoor fair

But Friedrichshafen does not want to say goodbye to the outdoor industry for good. All over the exhibition grounds were posters announcing the counter event "Outdoor 2019 - simply different", which the fair organisers want to launch next year. Who exactly will exhibit there and what concept Friedrichshafen wants to offer is not known yet. Andreas Schechinger, managing director of Tatonka said: "Like many of our customers, we would have welcomed it if both exhibition companies had clearly communicated their future concepts of the entire industry in the trade fair environment." Messe München will announce how it plans to present itself to the outdoor industry in 2019 on 27th June in Munich.

Outdoor is growing. This was the positive message by EOG president John Jansen when presenting the balance sheet during a press conference at the fair. The biggest growth drivers were by far footwear with 13.4 percent, followed by sleeping bags and mattresses with 9.7 percent and climbing gear with 6.7 percent. Clothing also grew by 5 percent. The only minus was recorded by the tent segment with -9.8 percent. The three strongest European markets are Germany, France and UK.

The fair identified the urban outdoor segment as a driving force behind the growth as well as the so-called hangout trend. "The success of outdoor has to do with deceleration as research has shown repeatedly", said the press spokesman of the fair. An example should be the HangOut area at OutDoor in Friedrichshafen: a haven of peace in the hectic day-to-day activities of the fair on one hand; on the other, a trend for the specialised outdoor trade. More than 20 companies took part in the HangOut area with products, activities, challenges and discussions. Martin Koessler, initiator of the 'HangOut Area' at the OutDoor in Friedrichshafen, explained: "The central element is 'being together'. To share time and experiences with old friends and new ones is an activity in itself, especially if you have meals together outside and spend the night together." Exhibitors therefore included suppliers of hammocks, camping equipment, water treatment, among others.

Like last time, there was a separate urban outdoor area with lifestyle brands such as United by Blue, Pally Hi, Icebug and Heimplanet. But also classic outdoor brands presented a sometimes very clearly fashionable influence in their SS2019 collections. Mammut, for example, showed the results of its reorientation with a cutting-edge black and white theme that was applied consistently to everything from hiking boots and backpacks to climbing ropes. Even pastels - so far nonexistent in the outdoor world - could be seen in numerous collections.

According to the show organisers, 950 exhibitors from 40 countries showcased around 200 innovations for the anniversary edition of OutDoor 2018, which attracted 30,000 visitors. Nevertheless, according to numerous exhibitors and visitors, the exhibition halls felt very empty at times, especially on Sunday and on Wednesday. Among the exhibitors, visitor magnets like Salewa and Salomon kept away from the fair repeatedly. Whether Munich will be able to reactivate these important outdoor players remains to be seen.

This article was originally written for FashionUnited.de. Translated and edited by Simone Preuss