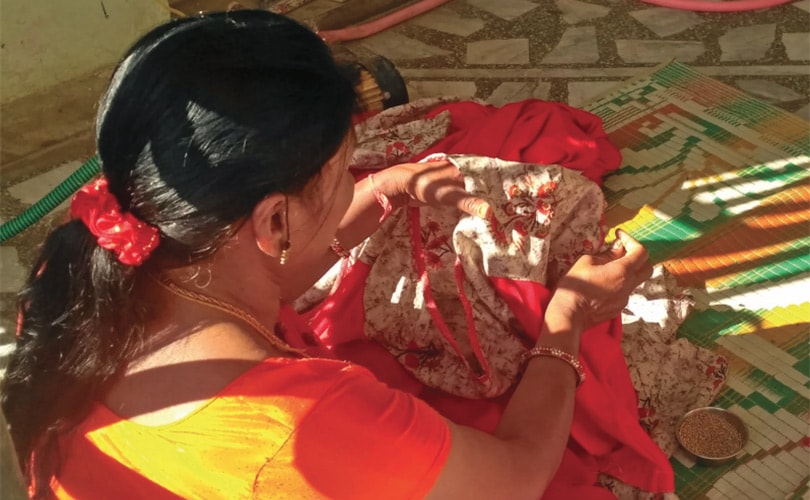 While increased attention is (finally) being given to the poor working conditions faced by garment factory workers in countries such as India, Burma and Bangladesh, few people know there are millions of workers making garments in informal, home-based settings too. During times of increased seasonal demand, many factories outsource production to informal businesses. A new study by Siddharth Kara from the University of California, Berkeley, has shed some light onto the lives of 1,452 home-based garment workers in India, one of the world’s largest garment exporters.

Home-based garment workers are usually women, living in cultures where women are not allowed to leave the home. The study confirmed that is the case in India: the vast majority (95 percent) of home-based garment workers in India are women and girls. The youngest respondent was 10 years old while the oldest was 73, although researchers saw many children under the age of 10 who seemed to be working alongside their mothers.

They work between six and seven days a week in shifts of six to eight hours a day. Their activities typically involve the “finishing touches” on a garment, such as embroidery, tasseling, fringing, beadwork and buttons. For that, they earn an average of 0.15 US dollars per hour, which means they are working in conditions classified as forced labor by Indian law, as their earnings are way below minimum wage. In fact, most of them receive between 50 percent and 90 percent less than the state-stipulated minimum wage -- if they receive it at all. “I never get my payment on time. I have to cry to get payment from the contractor”, said a 23-year-old woman interviewed for the study.

85 percent of surveyors reported they work exclusively in supply chains of major apparel brands from the United States and European Union. Combined, these two regions represent 47 percent of India’s total apparel exports. The remaining 15 percent of respondents work on a mix of export and domestic production.

“The aim of this investigation is to provide insights into the lives of these workers in the hope that governments, companies, and nonprofits will be able to coordinate on solutions to address the exploitation we documented”, said Kara in a statement. To inspire them to take action, the study offers 10 recommendations to help address the exploitation of women and girls in India by the garment sector.

1. Additional research: More research must be conducted to increase our knowledge about the working conditions of home-based garment workers.

2. Public-private partnerships: The study asks fashion companies, academics, NGOs, trade associations and government officials in the US, Europe and India to join forces to ensure children go to school full time and living and working conditions of all garment workers are improved.

3.Form a home-based garment worker union as currently there is no such thing in India.

4.Transparency and formalization of the home-based garment sector: the study calls for sub-contractors to register all home-based workers with whom they work and provide this information to suppliers and brands.

6.Payment for overtime:Many surveyors are often coerced to work 12 or more hours a day without being compensated for the extra hours.

8.Increase investigations and prosecutions: Those who exploit vulnerable workers should be penalized for their offense.

9.Support and empower women, girls and outcaste communities as they form the majority of workers who are exploited. They should receive education so they can be literate and trainings so they can pursue other types of work.

10.Increase awareness: Western brands and their customers must become more aware of the exploitative conditions under which their clothes are made.