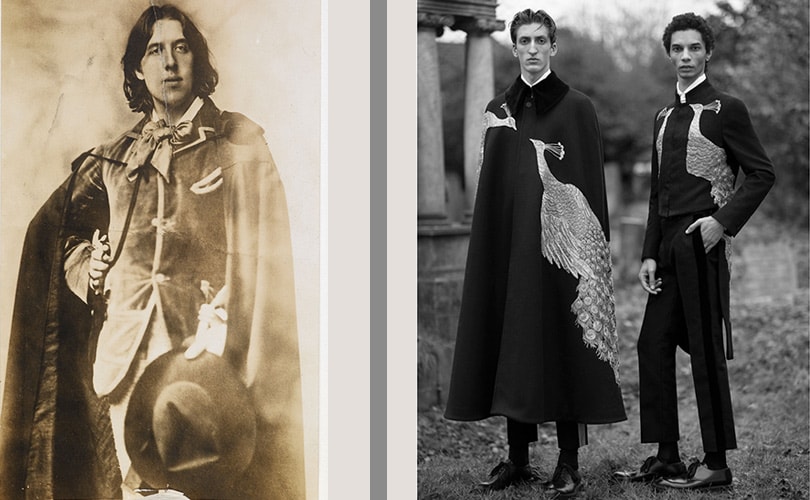 For anyone who might argue that fashion is trivial or frothy, its weight in literature cannot be underestimated. I have just attended the Franco-Irish Literary Festival where journalists from Vogue and Elle discussed with novelists and screenwriters the importance of clothing in storytelling. Clothes enhance characterization, place us in strangers’ shoes, allow us to inhabit alien landscapes. Speaking to its power Mark Twain said, "Clothes make the man. Naked people have little or no influence on society.” Let’s count down the top seven most influential moments when fiction and fashion have collided.

In Giacomo Leopardi’s poem entitled A Dialogue Between Fashion and Death, he explores the transience of fashion and parallels it with our own mortality: “Fashion: Do you not recognize me? Death: You must know that I have bad sight, and am without spectacles.” Fashion: I am Fashion, your sister…Do you not remember we are both born of Decay? We both equally profit by the incessant change and destruction of things here below, although you do so in one way, and I in another.”

Fashion is portrayed as a species of grim reaper aiding and abetting our demise, and although written in 1824, the sentiment is eerily applicable to both today’s fast fashion environment in which catastrophes like the Rana Plaza occur, and to our luxury industry in which designers like Alexander McQueen, whose work is celebrated for its dark and beautiful dance with death, succumb to suicide at age 40. 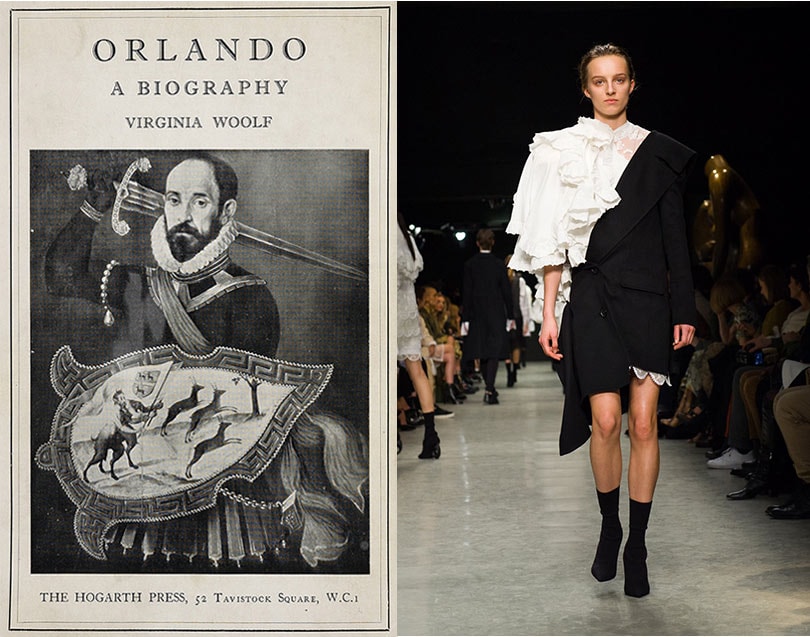 “Clothes have more important offices than merely to keep us warm; they change our view of the world and the world’s view of us” wrote Virginia Woolf in Orlando, the 1928 story of a nobleman who passes through time, flits effortlessly between genders, dressed in furs and laces, never aging. The 1992 film version called upon fashion’s favorite androgyne, Tilda Swinton, to fill the title role and that dapper gent Quentin Crisp to play Queen Elizabeth I. Woolf’s novel was a contemporary success despite the unusual subject matter for a female writer but its appeal endures setting the stage for today’s gender non-conformism. From Bloomsbury to Burberry, Christopher Bailey referenced Orlando in his September 2016 womenswear show. 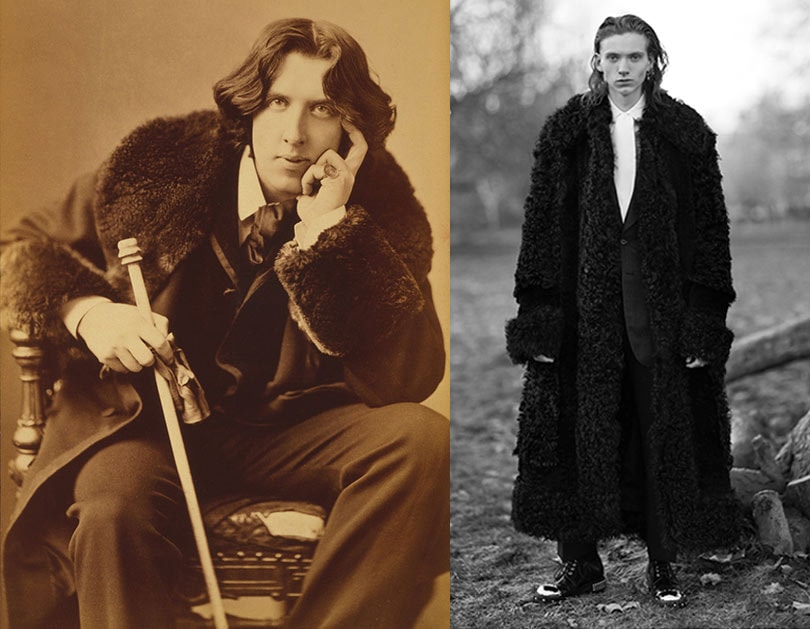 Oscar Wilde, the razor-witted dandy-aesthete, a perennial favorite of fashion designers, was the central influence in Alexander McQueen’s Fall 2017 menswear collection. Wilde’s words ”Fashion is a form of ugliness so intolerable that we have to alter it every six months” foreshadow today’s social media-hungry consumer who craves newness like never before. As editor of fashion magazine, The Woman's World, he predicted in 1887 that the dress of both sexes would be assimilated with women embracing masculine style. His wide-brimmed hats, long locks and sumptuous velvets drew as much attention as his novels and plays but it was his dalliances in the demimonde of male desire, unmentionable at the time, that landed him in Reading gaol. Still, he never forfeited style: ”If one is to behave badly, one should behave badly in a becoming dress.” Words to live by.

In Margaret Mitchell’s 1936 novel Gone With The Wind, Scarlett O’Hara’s lifestyle in the Confederate South is under threat by the imminent freedom of her plantation’s slaves. But our sympathies lie with this poor little rich girl when she is forced to plumb her meagre resources and conjure up a dress out of…curtains. How else will she snag her hero, and the money he brings with him? Who hasn’t backed away from their closet on a Saturday night staring glumly about and wished such inspiration were at hand? When she turns to her long-suffering servant and says, “Scoot up to the attic and get my box of dress patterns, Mammy…I’m going to have a new dress,” we might bristle at her sense of entitlement, but in these times of fast fashion landfills, we can’t fault her creative repurposing, also known as upcycling.

This passage from Bret Easton Ellis’s bestseller, American Psycho, which revolves around a discussion of the band U2 between the narrator, your average spiffily dressed serial killer, and a date invites us to ponder the passionate relationship of the 1980’s yuppie with Italian fashion:

"The Edge is wearing Armani," she shouts, pointing at the bassist. "That's not Armani," I shout back. "It's Emporio." "No," she shouts. "Armani." "The grays are too muted and so are the taupes and navies. Definite winged lapels, subtle plaids, polka dots and stripes are Armani. Not Emporio." I shout, extremely irritated that she doesn't know this, can't differentiate, both my hands covering both ears. "There's a difference."

Well, she’s clearly for the chop. Imagine not comprehending the gap between Armani’s diffusion line and his prima linea. 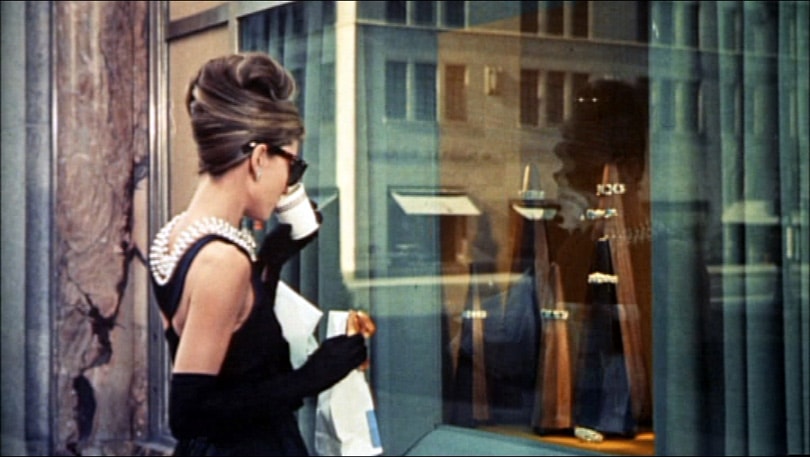 Truman Capote’s 1958 novella Breakfast at Tiffany’s launched the beloved Holly Golightly on the fashion world. Although the industry might believe she was the product of the atelier of Hubert de Givenchy, the designer tasked with outfitting actress Audrey Hepburn for the movie version, his work was already more or less done as we can see by Capote’s lines:

“It was a warm evening, nearly summer, and she wore a slim cool black dress, black sandals, a pearl choker. For all her chic thinness, she had an almost breakfast-cereal air of health, a soap and lemon cleanness, a rough pink darkening in the cheeks.” Golightly’s urbane, nocturnal allure has been a go-to reference for designers ever since and cemented our attachment to “the little back dress.” 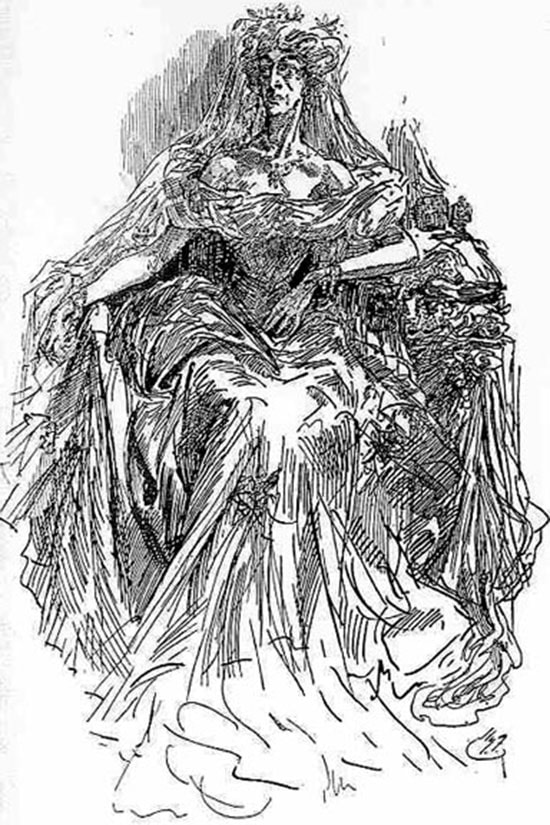 The ultimate “marriage” of fashion and fiction brings us back to where we started: Fashion = Decay = Death. I refer to the grand dame of Victorian classics, the ne plus ultra of spooky spinsterhood; bitter, skeletal, and locked away in her room next to her rotting wedding cake, Charles Dickens’s Miss Havisham from Great Expectations. The passages describing her going up in flames represent possibly the most visually exciting imagery to penetrate many an impressionable young girl’s mind, certainly more powerful than any modern example of Hollywood special effects, but it’s the words used to describe Pip’s first encounter with her which have inspired designers for decades. It’s easy to see why:

“She was dressed in rich materials — satins, and lace, and silks — all of white. Her shoes were white. And she had a long white veil dependent from her hair, and she had bridal flowers in her hair, but her hair was white. Some bright jewels sparkled on her neck and on her hands, and some other jewels lay sparkling on the table. Dresses, less splendid than the dress she wore, and half-packed trunks were scattered about. She had not quite finished dressing, for she had but one shoe on — the other was on the table near her hand — her veil was half arranged, her watch and chain were not put on, and some lace for her bosom lay with those trinkets and with her handkerchief, and gloves, and some flowers, and a prayer-book, all confusedly heaped about the looking-glass.

It was not in the first moments that I saw all these things, though I saw more of them in the first moments than might be supposed. But, I saw that everything within my view which ought to be white, had been white long ago, and had lost its luster, and was faded and yellow. I saw that the bride within the bridal dress had withered like the dress, and like the flowers, and had no brightness left but the brightness of her sunken eyes. I saw that the dress had been put upon the rounded figure of a young woman, and that the figure upon which it now hung loose, had shrunk to skin and bone.

By contributing guest editor Jackie Mallon, who is on the teaching faculty of several NYC fashion programmes and is the author of Silk for the Feed Dogs, a novel set in the international fashion industry.

greatest muses fashion by the book