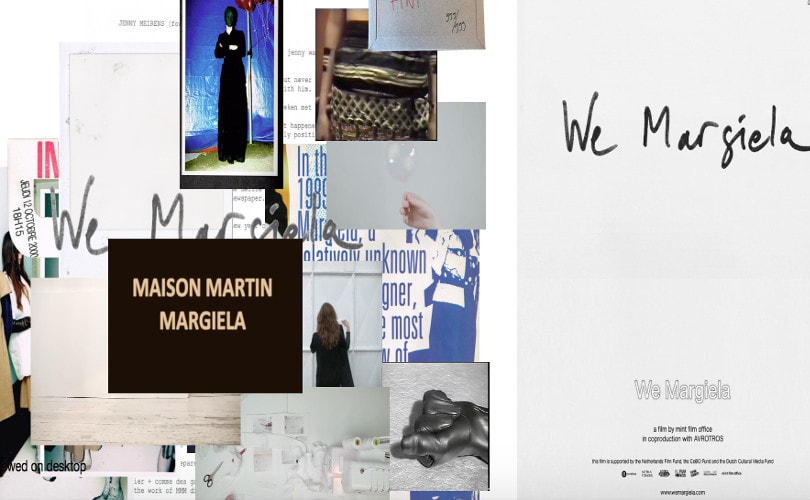 New York - The man, the myth, the legend that is Martin Margiela has inspired a level of fandom in the fashion industry usually reserved for musicians who’ve died too soon. It has only surged since he stepped away from his eponymous company almost ten years ago. While an exhibition in Paris currently presents a greatest hits from the maison’s archive, here in NYC the North American premier of the documentary “We Margiela” telling the story of the origin of his label shows at the Fashion Institute of Technology. A congregation of followers in statement eyewear, nicely tailored coats, hair pinned behind ears, bearing those four white stitches on the nape of their neck file quietly into the auditorium like members of a sect. Someone taking his seat can be heard saying, in awe, “Look at this. We’re all still standing on his shoulders.” Yet none of those gathering would recognize their charismatic leader if he brushed against them later as they spill out onto West 27th Street.

Made up of intimate interviews of the original members of Margiela’s team, with voiceover from his trusted business partner/alter ego, Jenny Meirens, who passed away last year, the documentary offers a deeper understanding of facts that have been known for years: that Margiela vetoed all photos of his face, allowing only his hands to be seen: that everyone who worked there wore a white lab coat emphasizing the egalitarian spirit of “We”, and that his aesthetic, as described by one loyal staffer, was a result of, “Belgian taste, no pretensions, no concessions.” In this age of hyper-recognizability, his anonymity must be truly unfathomable to the new generation of devotees, which surely only augments the myth of him. How could there ever be his like again?

We Margiela: the people behind the man

“Underground doesn’t exist today,” says Lutz Huelle, the house’s knitwear designer hired straight from school when, he admits, none of his classmates even knew the name Martin Margiela. Images of Margiela’s early chaotic shows from the late 80s, staged in dark clubs featuring awkward-looking wan-faced women plucked from the streets stomping by a front row of non-VIPs are best appreciated when we think of the fashion landscape of the time: glamour and supermodels, designers Christian Lacorix, Thierry Mugler and Emmanuel Ungaro (It would be five years before Marc Jacobs would create his grunge collection for Perry Ellis and get fired.) We learn that no one, including the two founders, received much of a salary, but the passion for the work was all encompassing. Stanislas Maryshev, from the maison’s sales department remembers it this way: “You melt in the story. There were no halfway people” Another who remained through the subsequent change of ownership and creative direction describes tearfully a sensation even today of being “in limbo.”

Perhaps the most poignant takeaway from the film is the comedown associated with belonging to this close-knit community. Reminiscent of Andy Warhol’s Factory which sent ripples of change across contemporary art and culture, Maison Martin Margiela’s output revolutionized modern fashion, blowing up everything we thought we knew and reassembling it. But while it could be argued that Warhol removed the soul from the creative process, Margiela firmly instated it at its heart, and this ultimately led to the original maison’s demise. Prolonging that cloistered harmony became impossible the more success Margiela acquired, outside demands weighed heavily on Meirens, and financial concerns intruded. Margiela sold the company to Diesel in 2002 but remained as creative director until 2009. Inge Grognard, the house’s make-up artist, recalls the moment when she knew Margiela had left the building, just upped and quit his company,: it was when she spotted Rihanna backstage at a show. Celebrity endorsement and red carpet dressing were the antithesis of Martin Margiela and irrefutable evidence of the abrupt system change that was about to shake the house. An especially touching moment examining the nature of identity comes through in the words of a loyal member of the “We” who reflects on the experience of being left behind: “There was nothing we could claim for ourselves. You can take away the worth of the individual.”

The argument is made that it is this nebulous quality that appeals to so many. The Martin Margiela phenomenon marked a moment in time when corporate glitz and branding were taking hold that permitted us to privately project whatever we wanted to believe about ourselves onto a blank white rectangular label, onto the whitewashed exposed brick interiors of his stores, even allowing us to do so still on the white screen with white subtitles which appear throughout “We Margiela” as Meirens speaks as if from the great beyond. In Margiela’s work there was a silence that allowed us to figure ourselves out, great presence in the absence. Almost a decade later, this presence has only become stronger, yet there have been no sightings of him ever reported, and he offers us no possibility of social media stalking. And still we melt into the story, no halfway people.