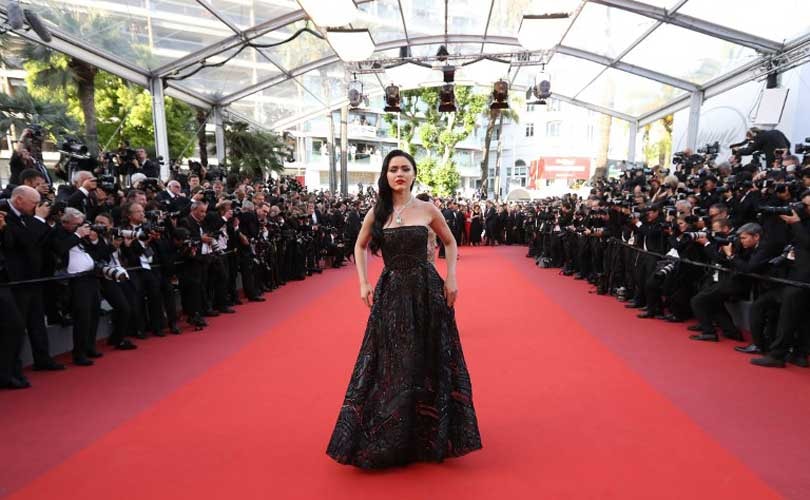 They dress like celebrities and can increasingly be spotted on the world's catwalks and red carpets. Meet the "influencers", the most famous people you've never heard of.

For 70 years, the Cannes film festival has been a key event on any A-lister's calendar. But move over Nicole Kidman, there's a new breed of star in town: social media personalities invited purely on the grounds of their huge Instagram or YouTube followings.

Sharing the red carpet with Kidman and Will Smith this week have been beauty bloggers like 17-year-old Amanda Steele (2.8 million YouTube subscribers) and Swiss Instagrammer Kristina Bazan (2.4 million followers).

Maja Malnar, who makes a living from her blog and 264,000-strong Instagram following, admits she's struggled to explain her job as a "social media influencer" to her mother back in Slovenia.

Years ago she started posting snaps of her daily outfits on the photo app and blogging about her travels. These days she's part of a growing industry known as "influencer marketing", whereby brands seek to harness the power of powerful web-users by slipping their products into their posts. "It's a good business, I can't complain," Malnar told AFP.

The petite blonde, who is in her twenties but declined to give her age, is set to walk the red carpet Friday in a tie-up with MasterCard and the designer who provided her dress. She'll then have to post about it.

"We're entrepreneurs. We saw a gap in the market and we capitalised on it," says her friend Lorna Andrews, a British ex-air hostess who modestly calls herself a "mid-tier influencer" with 464,000 Instagram followers.

Cannes is no stranger to those famous for being famous -- socialites like Paris Hilton have been turning up for years -- and brands have long recognised the festival's power as a marketing opportunity.

Top-end labels and jewellers have for decades dressed the stars for free at Cannes, knowing they will be snapped there by the waiting paparazzi.

But the arrival of the "influencer" at the world's biggest film festival -- and at international fashion weeks -- is a new phenomenon.

About 18 months ago Edouard Hausseguy, a 27-year-old Frenchman, realised the money-making potential of people whose photos, restaurant tips and beauty tutorials are followed by millions online, even though most would not recognise them on the street.

He set up his agency Hemblem to represent anyone with a following of 30,000 and up -- negotiating deals with brands, and then taking a cut.

"Those people are people like us, but they speak to millions of people with one picture," he told AFP in an interview on a yacht moored at Cannes, where he's hoping his influencers will benefit from the presence of top brands and the media.

For the festival, Hemblem has filled a villa with influencers who are splitting their time between glamorous events and furiously posting online, whether it's about designer labels or a charity for Syrian children.

Co-founder Thomas Elliott said brands were catching on to the power of a recommendation from Instagrammers to shift products from the shelves. "Jane next door or Joe next door is probably better for product placement, as people can identify with these people," he said.

It's possible to get paid for a single post -- "the fee depends on the size of the following", said Joe Gagliese, co-founder of Viral Nation, a rival agency based in Toronto.

Their accounts offer red carpet glamour and a peek behind the scenes, like Hadid sipping champagne while preparing for a premiere. Partner brands are carefully name-checked: make-up by Dior, jewellery by Bulgari.

Further down the food-chain, posts by smaller fish in the "influencer" pond still tell of a life of cocktails and beautiful clothes -- but the reality may be a little less glamorous.

There are constant worries of where the next event or brand tie-up might come from, and some re-sell the clothes they are gifted to make ends meet. And behind the glitz there is a constant pressure to post that Andrews and Malnar say can be stressful.

Neither expects to do this job forever. Women aged 18-30 make up the bulk of their followings, and unless these shift there'll come a day when they won't match their young demographic.

Youngsters' heavy use of Instagram is a worry for mental health experts, who warn these glimpses into the glamorous lives of others encourage depression and anxiety by prompting a "compare and despair" attitude.

There's a constant stream of appreciative comments under posts by Hadid and Ratajkowski, but also wistful ones.

Under a video of Hadid wearing custom Roberto Cavalli, one user sighed: "Can I just be her for one day?" (APF).

Homepage photo: Swiss blogger Kristina Bazan poses as she arrives on May 22, 2017 for the screening of the film 'The Killing of a Sacred Deer' at the 70th edition of the Cannes Film Festival in Cannes, southern France. - Credit: Valery HACHE / AFP