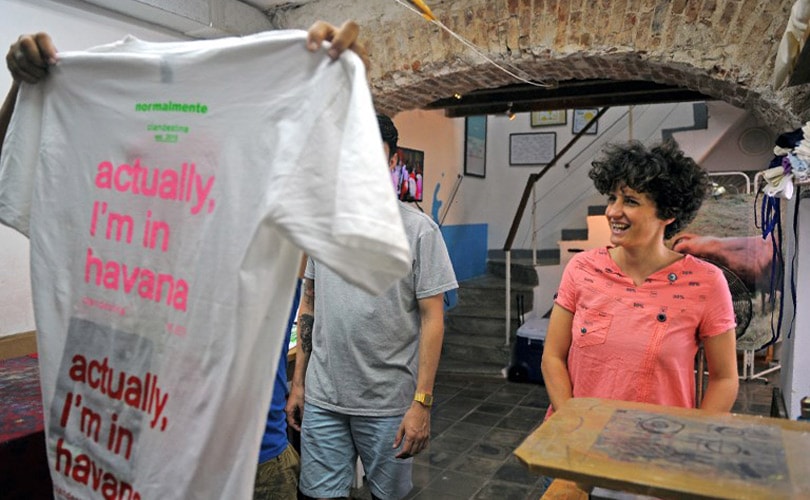 Without raw material for her fashion designs, Idania del Rio had to find a creative solution, resorting to using hand-me-down shirts, cutting them up and re-styling them to create her own clothing outlet.

She is part of Cuba's new generation of entrepreneurs, who have to use ingenuity to get to the marketplace, and are counting on the imminent changes at the top of the communist-ruled island's hierarchy to bring about a business boom.

Raul Castro started reforms to modernize an economy still modeled on the Soviet Union after he succeeded his brother Fidel as president in 2008, and entrepreneurs known as "Cuentapropistas" (literally, the self-employed) have emerged. Restaurants, barbershops and workshops of all kinds have flourished, and a decade on, small private businesses account for 12 percent of the country's workforce, or 580,000 people.

"We wanted to achieve something different in terms of design because it did not exist in Cuba," said del Rio, 36, who started her Clandestina clothing outlet with her Spanish partner Leire Fernandez three years ago. Their "Vintrash" remodeled and printed T-shirts go for 20 dollars each in their store in Old Havana's Villegas Street. "We have this passion for recycled things. But the main reason is because there was no alternative," she said. "When we were looking for what we could work on, we found little in the local market. But there was plenty to find second-hand."

Cuba imports the majority of what it consumes and remains heavily affected by the Cold War-era US trade embargo. Del Rio was able to circumvent the embargo by launching an online store and having her creations produced and sold in the United States, benefiting from a scheme introduced by the administration of Barack Obama to allow the export of Cuban creative products. Obama personally praised her undertaking during his historic visit in 2016, when he said Cuba's economic future depended on government action to spur growth in the private sector.

In Cienfuegos, 230 kilometers (145 miles) southeast of Havana, Asley Alfonso Gil gives a second or third life to bicycle wheels in his small workshop in the city center.

"A lot of bicycle parts break and we have no way to find new ones, so we have to repair them," said the 29-year-old. Castro is due to step down as president on April 19. His most likely replacement is First Vice President Miguel Diaz-Canel, 57.

The looming change has given rise to fresh hope among small business owners. "The role of the young people who start a business is important -- what should happen is that the Cuban state improves something and gives us the possibility of buying spare parts, because at the moment we are fixing and mending," Gil said. "We are hoping for openings in every sense of the term," del Rio added. Armando Reyes, who at 73 props up his pension by selling produce from a cart in the streets of Havana, believes the new self-employed have been a force for good. "There are coffee shops and bars that did not exist before, and good quality restaurants," Reyes says.

Last August, however, the government abruptly put the squeeze on the sector and suspended the granting of new licenses for dozens of cash-generating businesses, particularly restaurants.

The goal was to fight fraud and tighten loopholes for a sector that some of the country's leaders see as an affront to communism. In a country where the average monthly state salary is 30 dollar, a waiter in a private restaurant can earn as much as 200 dollar. At its most recent meeting in March, however, the Central Committee of the Communist Party recognized the important role played by entrepreneurs and the need to "continue updating the economic model."

For Cuban economist Pavel Vidal, from Colombia's Javeriana University, the new rules should bring a greater level of control over taxation and a greater degree of interaction with banks. "It is very important that the private sector contributes to the treasury in proportion to its profits, something that cannot be guaranteed if its operations are not registered in the banks," he said.

"A progressive and effective tax system is a net dividend for all." Bicycle repair man Gil hopes that everything will run as smoothly as a newly renovated bike -- despite the demise of old certainties. "Sometimes I'm a little bit afraid, because with Fidel and Raul, we felt more secure," he said. "We need a change for the benefit of the people, that they continue to award licenses, that businesses continue to open, so that the economy of the country keeps flowing." (AFP)