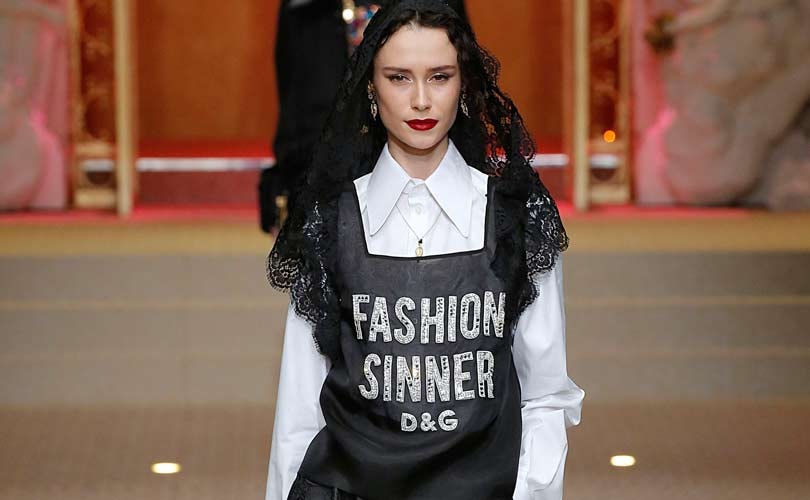 Darling, you look divine! Religion on the runway

Fashion and faith make unlikely bedfellows yet we continue to find them huddled in next to each other fighting for control of the blankets. In Gucci’s Fall 2018 show, Alessandro Michele sent turbans tied and folded in the custom of the Sikh religion onto his runway on mostly white models, then stood back and watched controversy ensue. Will he retroactively help promote Sikh enterprise the way he supported the relaunch of Dapper Dan’s business after pilfering from the Harlem designer’s archives last year amid accusations of appropriating black culture? Marc Jacobs, just a few weeks prior to Gucci in his New York Fashion Week show, had presented models with snugly wrapped heads under wide-brimmed hats that had many crying “hijab!”––a word conspicuously absent from the designer’s show notes. After his African head wraps of last season and his white girls wearing dreadlocks before that, one might conclude that he derives some sort of validation from courting the braying mob.

A History of our turban fetish

But is this behavior so reprehensible? Vogue.com lists Kate Moss in her gilded dress and coordinating turban of 2009, on the arm of Marc Jacobs no less, among the “Best Met Gala Looks of All Time.” From the time of Vermeer’s Girl With the Pearl Earring, turbans have been part of the Western sartorial lexicon, gaining popular in the 18th century due to increased trade with India, through Paul Poiret’s “Oriental” period of the early 1900s, seen on Marlene Dietrich, Sofia Loren and Princess Grace of Monaco, and bobbing across every self-respecting dance floor in the 1970s before making their way to Kate. But there is acknowledged difference between a “fashion turban” and the dastaar, an essential article of faith for male Sikhs and a sacred covering of their unshorn hair. The news that a young student was dragged from a Nottingham, England nightclub last weekend because he wouldn’t remove his turban or ‘headgear” as the bouncer referred to it, reminds us that what might be a novel fashion accessory for some is often a cause of unimaginable persecution when worn by a non-white without the conceit of a runway. Amrik Singh, 22, told the Independent of the incident last weekend, “I explained that a turban isn’t just headgear, but part of my religion and that it protected my hair – and that I was allowed to wear a turban in public.”

“We are getting free and rather positive publicity here,” argues the website SikhNet, which describes itself as the largest Sikh website, regarding Gucci’s runway turbans. “Of course, the turban is of particular spiritual and social importance to us Sikhs, but it has been worn by those of other religions in past times as well as now. Moreover, it has always had secular as well as sacred usage. Religious boundaries are a delusion. We should keep things simple.” 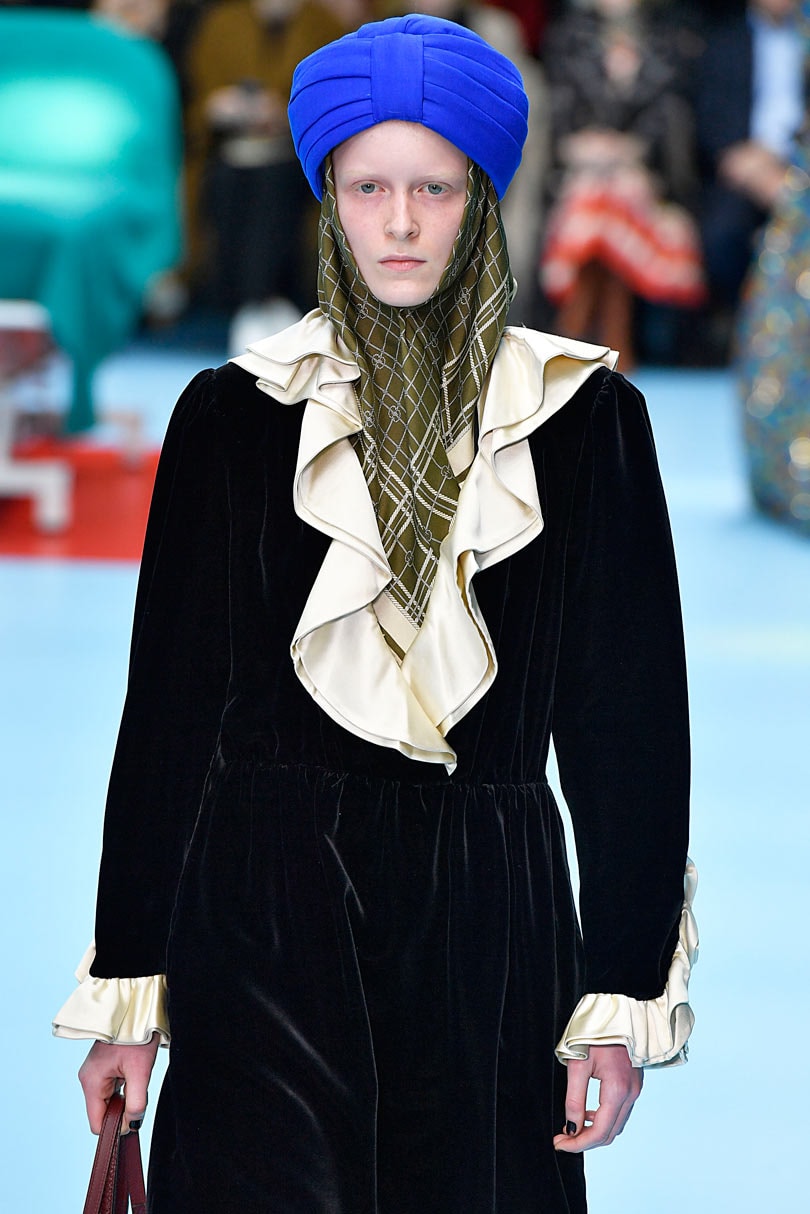 “Creating awareness” and “seeing our culture represented positively” were other Twitter rejoinders to the backlash. The sense of “otherness” which the Western world attach to faiths outside of Christianity arguably contributes to much of the prejudices afflicting society, and seeing symbols of Sikhism in the colorful pick-and-mix culture of a Gucci runway is remarkable. Nothing is ever black and white, binary arguments are problematic, can lead to stalemate, shut down dialogue, and thereby thwart any possibility of spreading understanding. One could argue that fashion’s promotion of material goods is essentially a rejection of spirituality and therefore the whole discussion is moot. All the same, seeing a Sikh model wearing his own sacred head wrapping on the Gucci runway would have been a win-win: resoundingly creating awareness, positively representing, but indicating cross-cultural collaboration–-and, perhaps more importantly, showing that Alessandro Michele had learnt from past indiscretions. But the house was not to be spared this season either. Is it a case of there is only one thing in life worse than being talked about, and that is not being talked about? There’s no chance of that when you also have pet dragons and “severed” heads on the same runway.

Catholicism is the new black

On the first Monday in May, the glittering event that is the Met Gala will take place, its theme this year, “Heavenly Bodies, Fashion and the Catholic Imagination:” As someone who was raised Catholic, I can rest easy knowing that the show will be nothing but a garish spectacle. Everyone knows the first rule of being a good Catholic is that one doesn’t have an imagination––that’s where all the trouble starts. At the sacrament of Confirmation, the thus-far unpoliced mental landscape complete with its dark recesses and out-of-the-way divey alcoves is effectively closed down in the same way that Mayor Giuliani closed the peep shows of Times Square and the downtown dance clubs operating without a cabaret license. This Met show, although a high profile affair, will be inauthentic, camp, irreverent, superficial, possibly blasphemous, but surely fake news… 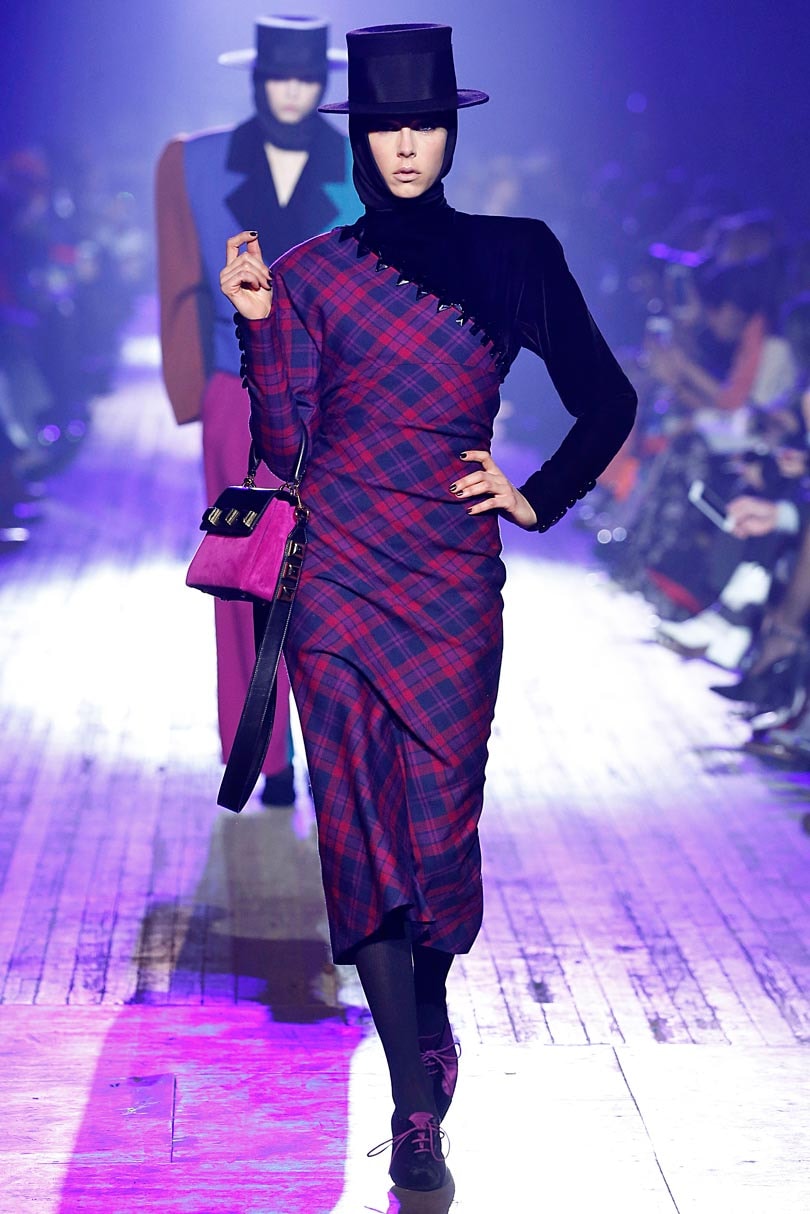 At least that’s what I would have reasoned, were it not for the fact that the Vatican itself has loaned the Met forty ecclesiastical vestments from the Sistine Chapel sacristy, which have never before traveled outside the Vatican. At Catholic HQ right now they’ll be tagging and boxing them up, compiling a shipment list, while we sit here worrying our rosary beads––the same beads that when worn by Madonna, who was raised Catholic, as she danced around in her “Like A Prayer” video incurred the condemnation of the Vatican. Incidentally, Madonna favorite, Dolce & Gabbana, will surely feature in the exhibit, the emblazoning of Catholic iconography across garments such a feature of the design duo’s work throughout their career. There will also be pieces from Versace, John Galliano, and Coco Chanel. And this year’s exhibit will have an extended run of six months instead of the usual three, and will be spread out over three locations: the Anna Wintour Costume Center, the medieval galleries at the Met’s Fifth Avenue location, and the Cloisters in Upper Manhattan.

You gotta have faith.