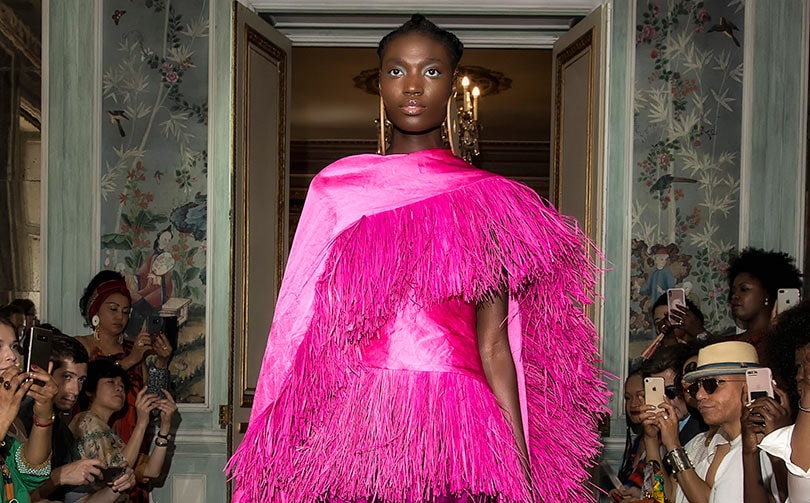 Imane Ayissi: "Africa is no longer excluded from international fashion"

Imane Ayissi, a multidisciplinary artist inspired by dance and fashion as a way of life will participate as a guest presenter in January on the official calendar haute-couture week in Paris. Native of Cameroon, and son of African boxing champion, is asserting himself as the first sub-Saharan creator by joining the ranks of the fashion elite. The designer insists on the use of African organic materials and techniques in his collection, as well as sustainable production. In an interview with AFP, the 51-year-old designer expressed his hopes of "opening up a new path for Africa" in an "alternative way of doing luxury fashion" through his upcoming show.

How would you define your style?

I'm probably not in the best position to define it. I would say it is contemporary couture, which mixes African inspirations with a Parisian look, and which remains simple even on silhouettes that can be very ornate.

How does your dual culture influence your work?

I think it defines my creations. I want to tell African stories, to integrate African know-how, especially textiles, but at the same time I am completely permeable to the Parisian environment in which I live most of the time, so I create clothes for today that can be worn in any part of the world.

You have just been elected as an "invited member" to the FHCM. What does this mean to you and what benefits does it entail?

First of all, it's a recognition of my work by the profession since, in order to be registered, you have to be accepted by a committee that includes representatives of the biggest Haute Couture Houses and the most prestigious brands (Dior, Chanel, etc.), so it's quite rewarding personally. Moreover, my candidacy was sponsored by Francesca Bellettini of the House of Saint Laurent: Yves Saint Laurent is an absolute reference for me and I admire the way Franccesca Bellettini has been able to maintain the spirit of the House while bringing it back into the contemporary world. The fact that I am the first designer from a sub-Saharan African country is also symbolically important, it shows that this part of the world is no longer the only region that is excluded from international fashion. Finally, I hope that this will lead to greater visibility and brand awareness for my brand.

In your opinion, what is Africa's place in Haute-Couture today?

In a few days, you will be marching in Paris. What will be the theme of your collection?

This collection will be entitled "Akouma" which means "wealth" in the Ewondo language of Cameroon.

Where are your collections distributed?

My ready-to-wear pieces are distributed mainly in Paris at "Front de Mode", in Lagos at Alara, online at , and in various shops in Rabat, Nairobi, Yaounde ... etc...

I have various projects for my ready-to-wear line, but I can't really talk about it at this stage, a project for an exhibition in Stockholm in Spring and then, of course, continue to create.

This article was originally published on FashionUnited.FR, translated and edited by Kelly Press