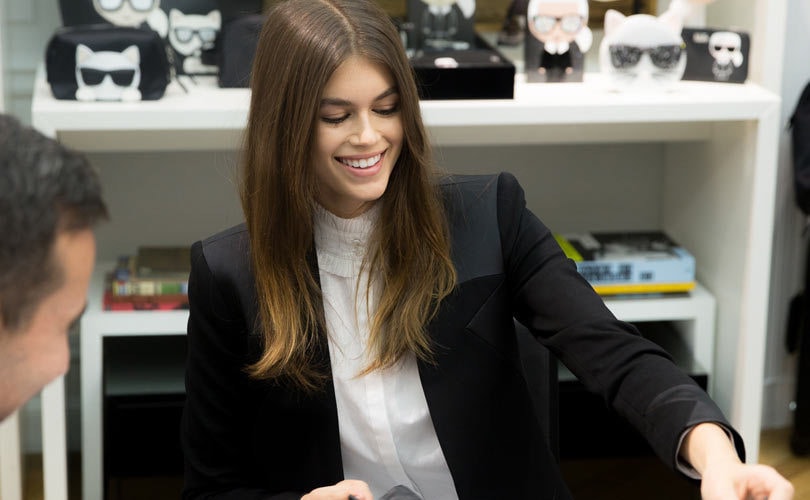 Gerber, who is the 16-year-old daughter of supermodel Cindy Crawford with more than 2.7 million Instagram followers, is set to create a capsule collection for Karl Lagerfeld’s eponymous line that will take inspiration from her West Coast style with Lagerfeld’s Parisian aesthetic.

The ‘Karl Lagerfeld x Kaia’ capsule collection will comprise of ready-to-wear and accessories, including footwear, sunglasses and jewellery, and will blend Gerber’s “LA inspirations and confident, original vision” with Lagerfeld’s “timeless, Parisian chic aesthetic”, said the designer label in a press statement.

Commenting on the collaboration, Pier Paolo Righi, chief executive officer of Karl Lagerfeld, said: “When Karl first told of his idea to collaboration with Kaia, we were all excited by the incredible potential and power of bringing their two world’s together.

“We have been working intensely over the last months with Kaia in LA and at our studio in Paris. It was exciting to see her clear vision, passion and engagement, and the collection will definitely inspire many young women.”

Kaia Gerber to design a capsule line with Karl Lagerfeld

Further details of the collection are set to be release throughout 2018, however, it is expected that the ‘Karl Lagerfeld x Kaia’ capsule collection will launch in September alongside a series of events in Los Angeles, New York and Paris, according to reports, before rolling out across Karl Lagerfeld stores and online at Karl.com.

This isn’t the first time that Lagerfeld has called on the rising star, Gerber opened the Chanel spring/summer 2018 show in October in Paris, after she made her catwalk debut during New York Fashion Week. During the SS18 season she went on to become the ‘most wanted’ model appearing in 18 shows including Calvin Klein, Saint Laurent and Prada.

Models, especially models with millions of social media followers, are becoming hot commodities with fashion brands when it comes to putting their name to collections, just look at the success of Tommy Hilfiger’s collaboration with Gigi Hadid. The debut Tommy x Gigi line launched with a see-now-buy-now show in September 2016 and generated 900 percent increased traffic to tommy.com in the 48 hours following, the duo are now preparing to launch their fourth season together.