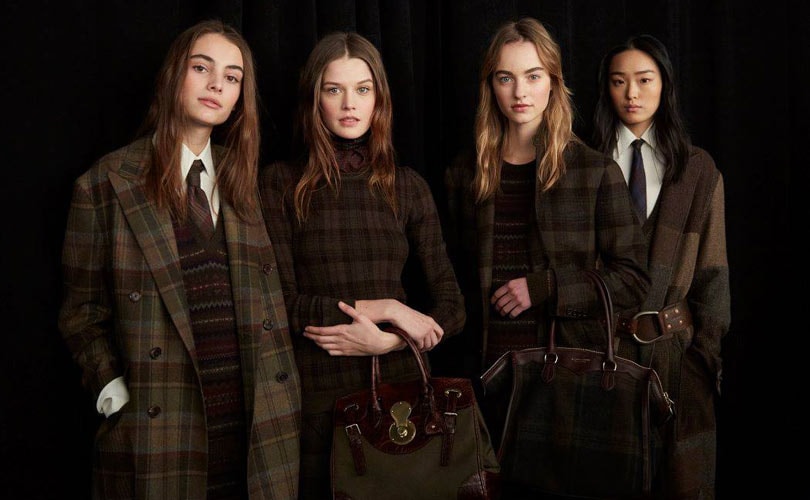 Ralph Lauren kicked off the final day of New York Fashion Week Thursday with a collection that blended an English country gentleman look with cowboy dandy, and was crowned with liquid gold evening wear.

British actress Sienna Miller was guest of honor, dressed in black, and sat next to Vogue editor-in-chief Anna Wintour and Lauren's family for what is always one of the most popular shows of the week.

The 76-year-old self-taught designer, who has done so much to define modern American chic, sent down the runway a masculine look for daywear -- a meditation on taupe, truffle and mocha. He made extensive use of plaid and checks for fall/winter 2016 with signature suiting that included loose-cut pants, blazers and trench coats finished off with men's ties at the throat. 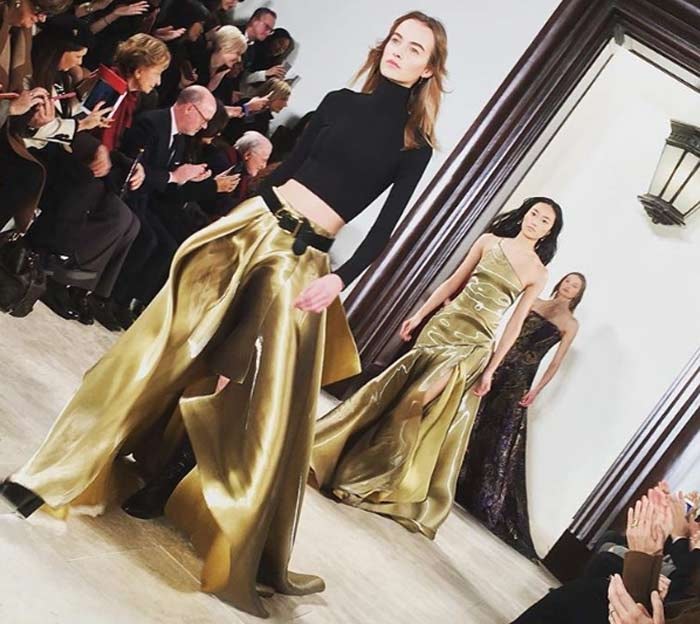 The suiting was lightened when styled with delicate cashmere knits, pleated silk crepe pants and silk shirts. To the tweedy country gentlemen look he added quintessential American cowboy-style belts, bootcut jeans and sturdy boots. His evening wear had its roots in a Victorian-era elegance, with frothy high-lace collars and black velvet, and a Prussian pigment printed coat that looked like a Romantic-era smoking jacket.

There was a stunning black velvet evening dress finished with oversized pleated white cuffs and a pleated white ruffle at the neck worn by Illinois-born supermodel Karlie Kloss. A black velvet cocktail dress was made similarly exquisite -- embellished with tightly pleated black leather ruffle sleeves and a collar that defied gravity and made the outfit look like sculpture.

Lauren broke new ground by finishing the show with a mikado evening dress, its billowing skirts in his trademark style, but giving off the overall effect of liquid gold, glistening like plastic. He fashioned the same material into a billowing skirt worn with a stretch black jersey turtleneck and black boots.

It was Lauren's first collection since he stepped down last November as chief executive of his global empire (although he remains chief creative officer), replaced by Stefan Larsson. Born Ralph Lifshitz in the Bronx in New York to poor Jewish immigrant parents, Lauren began his career as a self-taught tie designer and unlike most people today, never went to fashion school.

In 2014, the Ralph Lauren Corporation rang up 7.6 billion dollars in sales and Lauren ranks 74th on Forbes' list of wealthiest Americans, with a personal fortune of 5.6 billion dollars. He is a household name thanks to his signature polo shirts finished with the polo player logo that have become leisure uniform of choice for the world's rich and aspirational class.

His runway collections embody a "preppy" look that harks back to old-world European aristocracy but whose clean lines and simple elegance create a uniquely American look. Fellow American design royalty Calvin Klein and Marc Jacobs follow suit with shows later Thursday as New York Fashion Week wraps up and the style posse jets to Europe to continue the fall/winter season.

Proenza Schouler showcased a collection late Wednesday based on the abstract ideas of control and release from design duo Jack McCollough and Lazaro Hernandez. "Things were like really kind of tight and body conscious on top, with lacing coats and jackets to create this tension, and usually in the bottom it became really flowy and loose," Hernandez told AFP. (AFP)