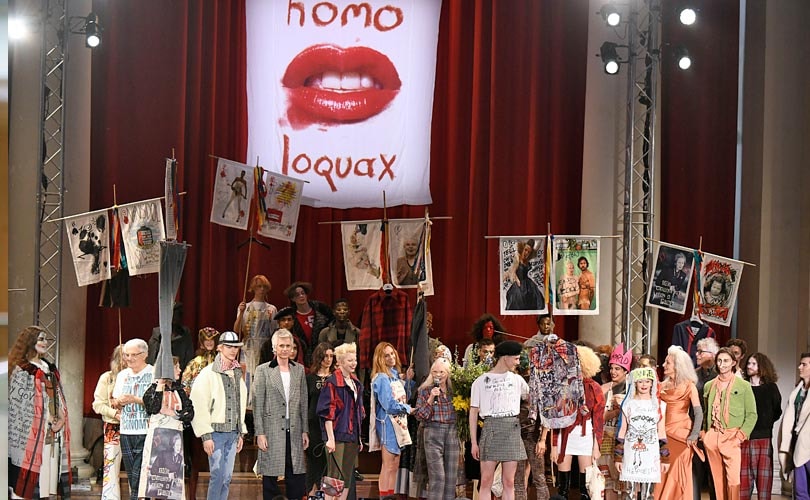 LFW: A Season For Activism

For autumn/winter 2019, a continuing trend across London Fashion Week was the act of fashion to protest, with many designers using their fashion week platform for activism across numerous causes including Brexit, climate change, women’s rights, and justice for Grenfell.

Most vocally was Vivienne Westwood who used her autumn/winter 2019 catwalk to act more as a manifesto, with an assembled cast of activists including actress Rose McGowan and Greenpeace executive director, John Sauven addressing the fashion crowd on a number of issues including the consequences of consumerism, climate change, and Brexit, which the designer call a “crime”.

As for the fashion, it was Westwood honouring her anti-establishment, punk roots, with dishevelled-looking coats, hand-knitted recycled jumpers, bold tartan suits, and slogan T-shirts including one of stating, “Too fast to live, too young to die” as well as one saying, “What’s good for the planet is good for the economy”.

At the end of the show Westwood herself skipped down the catwalk singing the children’s song ‘Round and Round the Village’, with her model protestors marching with banners to form a picket line on the stage of the former church venue in Westminster. 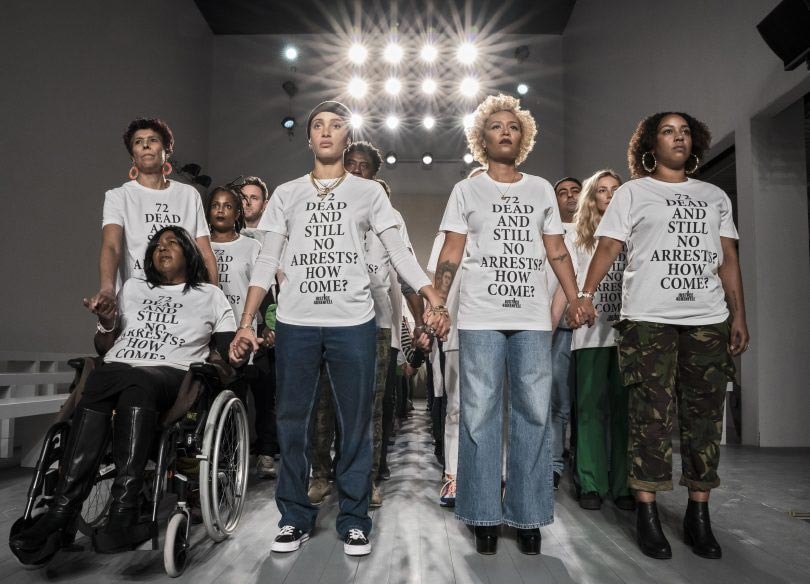 20 months on from the Grenfell Tower fire in London that claimed 72 lives, 72 people, comprising of activists, bereaved families, members of the community and supporters of the cause, united at the start of London Fashion Week, calling for justice as nobody has been held accountable for the atrocity of the fire.

Yvette Williams, Justice4Grenfell campaign coordinator, said in a statement: “London Fashion week is a perennial event in the international calendar and highlights the world talent, creativity and inspiration in our diverse city.

“The fire at Grenfell Tower is the unfashionable side of London where 72 people needlessly lost their lives. Their deaths will not be in vain. We are honoured to be part of LFW that will assist our campaign in keeping a global focus on what happened at Grenfell and to support the bereaved families in their continued fight for truth and justice.” 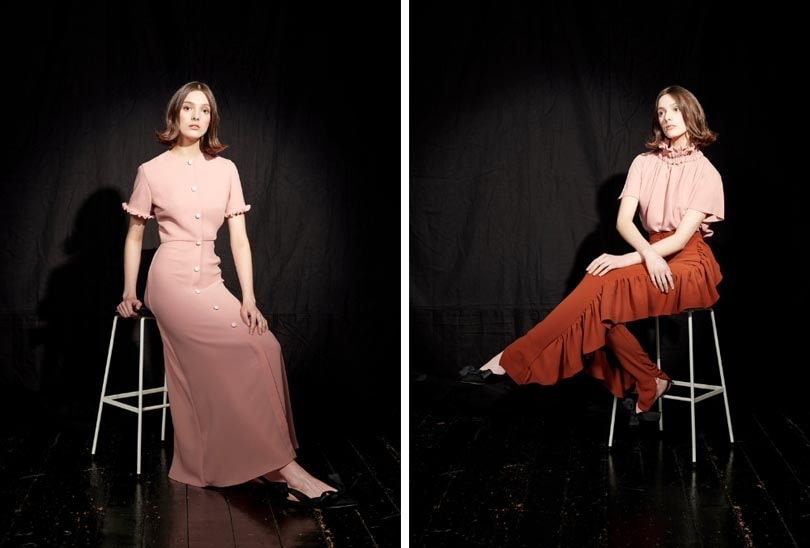 Rather than using her two-hour presentation slot to showcase her collection in a typical salon-style format, Edeline Lee instead used it to put a spotlight on women’s voices from across a range of different professions, inspired by Professor Mary Beard’s seminal text Women and Power (2017), a manifesto exploring “the public voice of women and our culture assumptions about women’s relationship with power”.

In her show notes, Lee explained: “Fashion itself is an arena where women are always seen, seldom heard. As a response, this immersive presentation is conceived as a two-hour marathon of women’s voices.

“I design for the ‘Future lady’ – a muse that I invented to represent what dignity, grace, femininity, and power look like on a woman of the contemporary world. Fashion is always aspirational. In today’s world, what do we aspire to?” 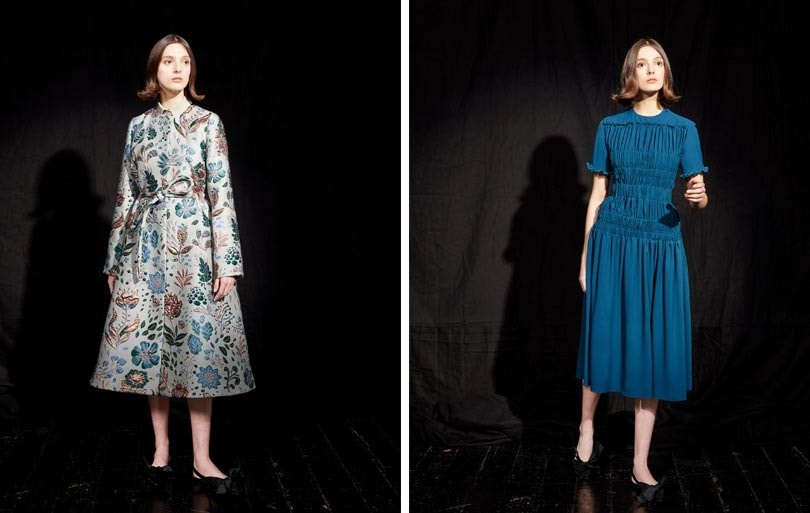 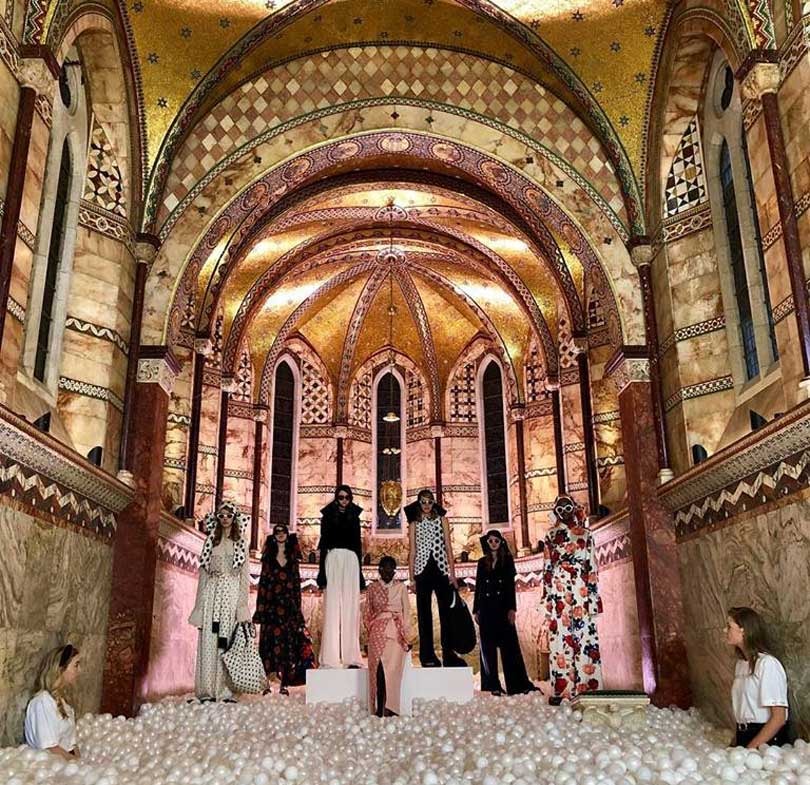 Mother of Pearl transformed the Fitzrovia Chapel into London’s most fashionable ball pit, with more than 300,000 pearl balls surrounding the models to represent the "plethora of microplastics that are deposited into the oceans each day from the washing of synthetic fibres”.

To highlight the brand’s focus on natural fibres alongside its commitment to cleaning up fashion, Mother of Pearl also announced that it will be donating 10 percent of sales fo the rest of the month to a charity that helps clean-up the oceans.

To further highlight the brand’s sustainable message they made the event as circular as possible by renting everything to “create minimal waste,” stated the brand on its social media.

As for the collection, creative director Amy Powney has been inspired by Pretty Woman’s Vivian Ward with polka dots featuring heavily across dresses, shirts and wide-leg trousers. 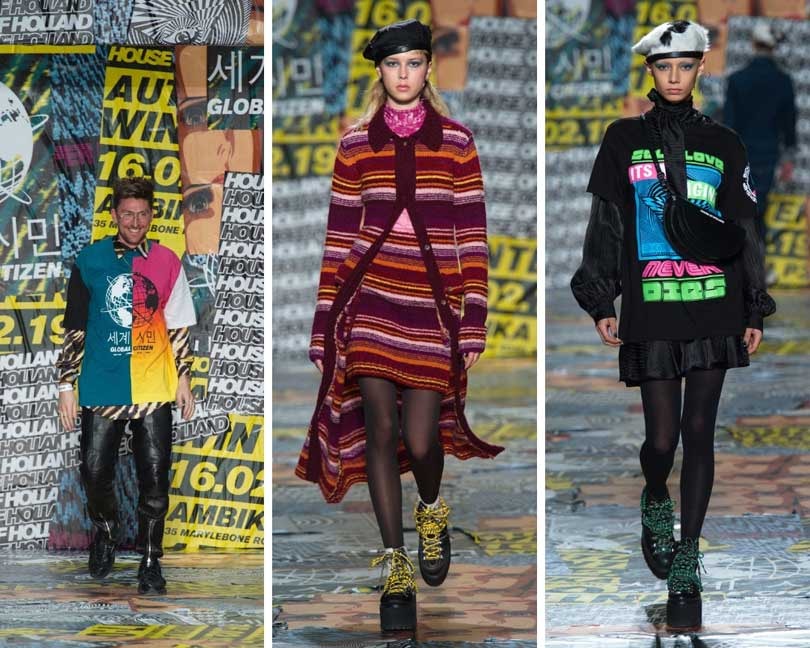 Henry Holland plastered his catwalk with political posters and manifestos for his autumn/winter 2019 collection called ‘Global Citizen’ as he protested against building borders in the wake of Brexit.

"Picture a globe with no colours. No names, no measurements, because life is not measured by miles,” stated Holland in the show notes. “Global Citizen is a love letter to outspoken and the rebellious. For those who cross borders, scale walls and show that creative inspiration cannot be confined.”

The British designer presented a utilitarian uniform of sharp, quilted tailoring in neon orange Prince of Wales check, animal jacquard silks and ruched shirts, for what he calls the generation who feel “increasingly unheard, misrepresented and angry at the way their world is being governed.”

While the underlying message was political, the commercial collection was centred around the strong, empowered and invigorated muse who is ready to make a change, and for that she needs a tough but feminine touch, which was seen in the velvet, printed ombre lace, chenille knits and quilted nylon micro minis, all finished off with Grenson hiking boot and Che Guevara inspired quilted berets from Noel Stewart. 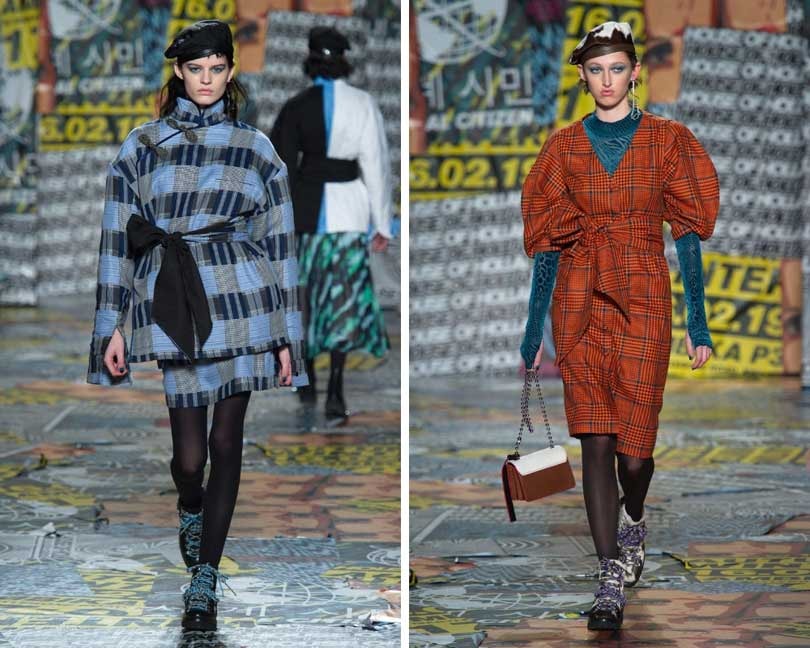 Images: courtesy of House of Holland 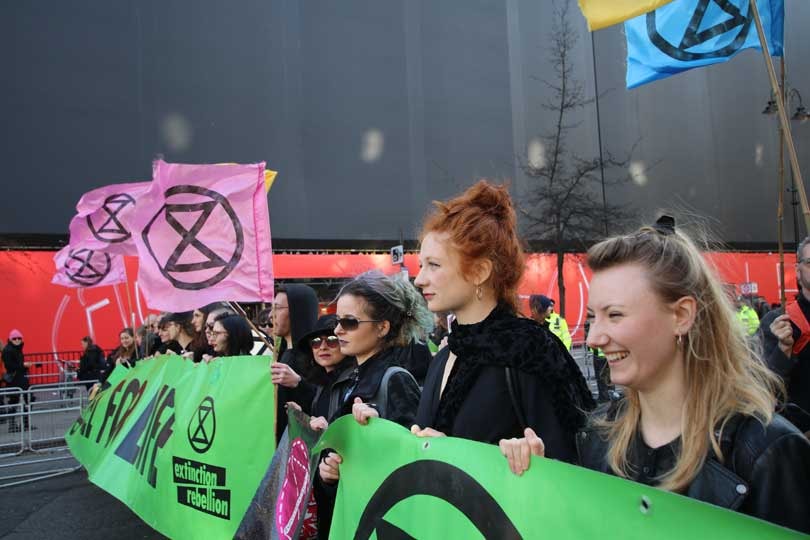 Activist group Extinction Rebellion brought London Fashion Week to a standstill as models and protestors mingled in the street outside the official British Fashion Council venue to urge the fashion industry to “tell the truth about the ecological emergency and act on it”. The movement then heading to Blackfriars Bridge to block access to the Burberry show at the Tate Modern.

The protest called on guests to “dress as though you are going to the most glamorous funeral” and wrote to the British Fashion Council in an open letter stating that London Fashion Week was key driver of global trends and asked them to use its “influential position to tell the truth about climate change, as there would be a surge in popular support for climate action”.

The group states that the fashion industry is doing little to cut its own greenhouse gas emission footprint, which it claims is the same size as Russia’s, and highlighted that the industries practices of worker exploitation, pollution, and unsustainable mass production are largely fed by encouraging a growing trend of fast fashion, where people buy more clothes, wear them less often and throw them away faster.