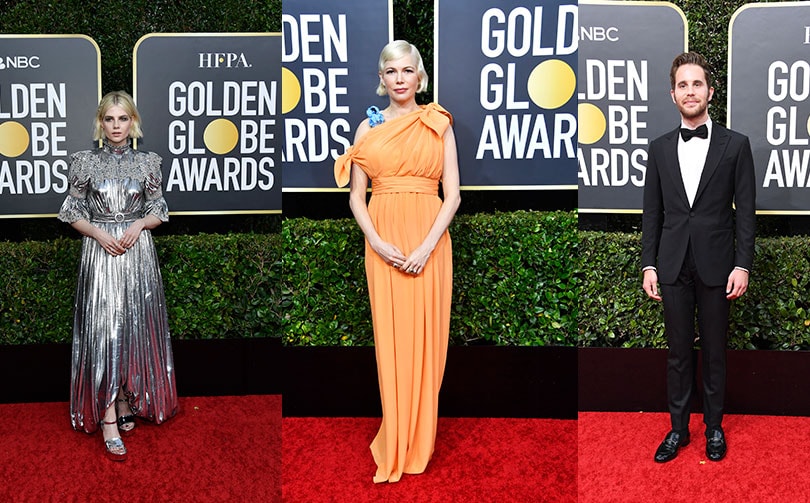 Hollywood's brightest stars sparkled Sunday on the red carpet at the Golden Globes, the first showbiz awards gala of 2020.

Under sunny skies, the best and brightest of film and television gathered at the Beverly Hilton in their finest for the ceremony, hosted by British comedian Ricky Gervais.

Here is a look at some of the trends spotted on the red carpet:

The Category Is: BLAQUE SWAN Wearing custom @alexvinash with custom @jimmychoo Boots and @emmkuony Bag using over 4,000 Swarovski Crystals. The jewels are by @tiffanyandco with styling by @sammyratelle . . It’s such an honor to return to this year’s 77th annual @goldenglobes in support of @poseonfx. A show that has completely changed my life and created visibility for our marginalized #lgbtq family. Our show is particularly important as currently our human rights are still under attack and our political world is in shambles. The world has gone absolutely mad and when we started to think about what I would wear today, the first major appearance of the new decade, we decided to go all white. The color symbolizes peace, hope, and new beginnings. My @tiffanyandco dragonfly brooch is symbolic of transformation and self-realization. All of these themes and symbols encapsulate my hope for all people in 2020. We must continue to strive for life and kindness. Especially when our world is on fire . . Style by @sammyratelle Grooming by @heyannabee Wearing custom @alexvinash Jewels by @tiffanyandco Boots by @jimmychoo | @sandrachoiofficial Clutch by @emmkuony Eyewear by @mercuranyc Crystals @swarovskiforprofessionals

Tinseltown's A-list wants to make a good impression on the first major red carpet of the year, and how better to do that than in classic black and white, a fashion staple.

Style icon Billy Porter, a nominee for best actor in a TV drama for his work on "Pose," wowed fans in an all-white Alex Vinash tuxedo with a coat featuring a giant feather train -- that zips off, he explained to E! television.

Actress-filmmaker Greta Gerwig -- whose "Little Women" was in contention but who was notably snubbed in the best director category -- turned heads in a black Proenza Schouler dress with a notable side slit and a white off the shoulder neckline.

Nominee Cynthia Erivo ("Harriet") rocked a similar look -- a custom Thom Browne number with flowers embroidered in the inner lining of her dress.

And Awkwafina, who took home the award for best comedy film actress for her starring role in "The Farewell," sported a sleek Dior tuxedo with a ruffled collar blouse and a long ball skirt.

The stars hit the red carpet in the middle of the afternoon in Los Angeles, but midnight blue was all the rage.

This evening at the 77th Annual @goldenglobes, actress and upcoming #BondGirl @Ana_d_Armas looked phenomenal wearing a custom #RalphAndRusso all over navy sequined strapless ballgown, finished with a soft roll collar and bow belt. Styled by @karlawelchstylist

Ana de Armas, a nominee for best comedy actress for the murder mystery "Knives Out," said she was "a little bit of a mess" at her first Globes but looked like a million bucks in a glittering, strapless Ralph & Russo gown with a full skirt.

Beanie Feldstein, a nominee in the same category for "Booksmart," beamed in her strapless blue Oscar de la Renta gown and matching headband.

A red dress is the stuff of Hollywood legends, and some of Hollywood's biggest stars delivered.

Nicole Kidman, who stars in the Fox News harassment scandal flick "Bombshell" as Gretchen Carlson, went strapless -- a big trend on the night -- in a crimson Versace gown with a train and strappy stilettos.

Scarlett Johansson, who starred in the searing Netflix divorce drama "Marriage Story," upped the va-va-voom factor in a plunging strapless Vera Wang gown in a hue that matched her name.

And Olivia Colman, a winner on Sunday for her turn as Queen Elizabeth II in Netflix's "The Crown," opted for a red Emilia Wickstead gown with dramatic puff sleeves and an Empire waist.

Jennifer Lopez has come as a giant present. I thought we were past that. #GoldenGlobes pic.twitter.com/7vYylj0g6k

Jennifer Lopez is 50 and fabulous, and has earned lots of praise for her Globe-nominated performance as a veteran stripper with a plan in "Hustlers." Her red carpet moments are sometimes the stuff of legend, like her iconic green Versace dress at the 2000 Grammys.

But on Sunday, her Valentino look -- topped with a giant green and gold bow -- was... less than universally loved.

"Jennifer Lopez has come as a giant present. I thought we were past that," New York Times fashion critic Vanessa Friedman tweeted.(AFP)