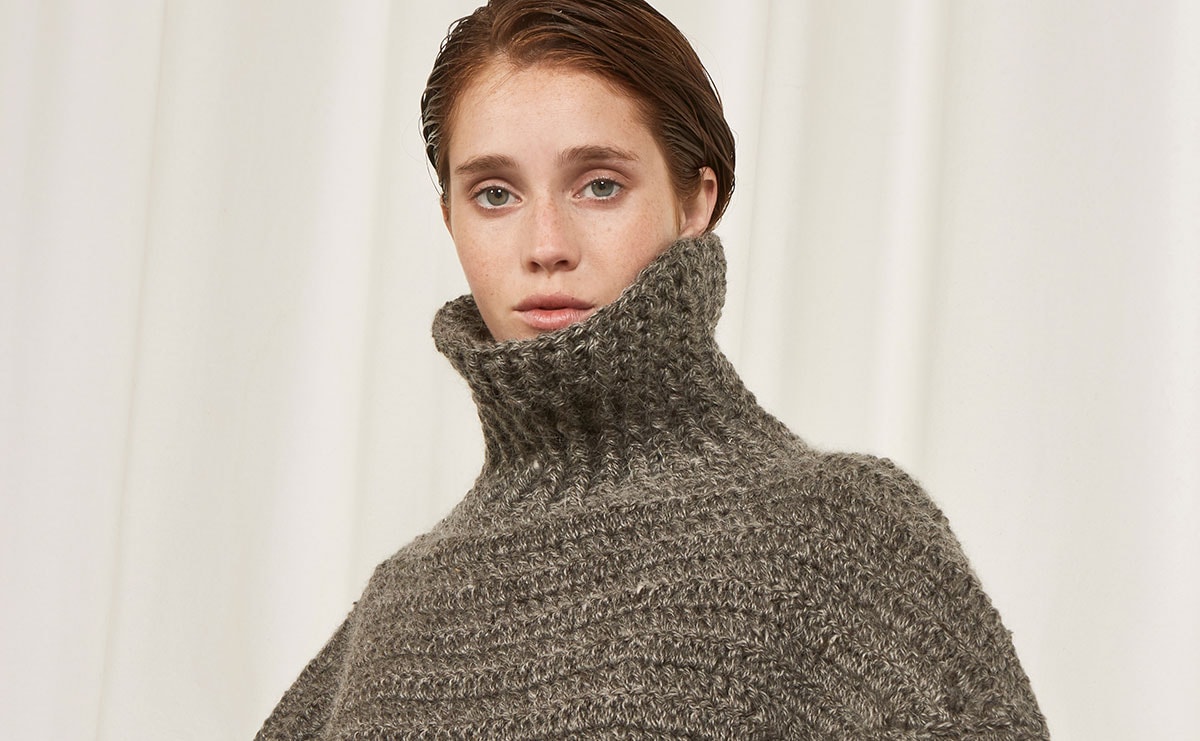 Behind each brand is a mind. Behind handmade knitwear brand, Maydi, is Maria Abdala Zolezzi, an Argentinian designer with a vision to create fashion processes that respect both workers and the environment. Maydi uses fibres traditionally found in Argentina, such as merino and camelids wool to create ageless contemporary designs.

Before founding her brand in Argentina in 2014, Maydi lived in Europe for 13 years where she worked for some of the world's leading companies. After graduating in Design from the London College of Fashion, Maydi worked in Paris and Milan for the likes of the Totem Fashion Agency, Hermès, Maison Sonia Rykiel and the Fédération Française de la Couture. 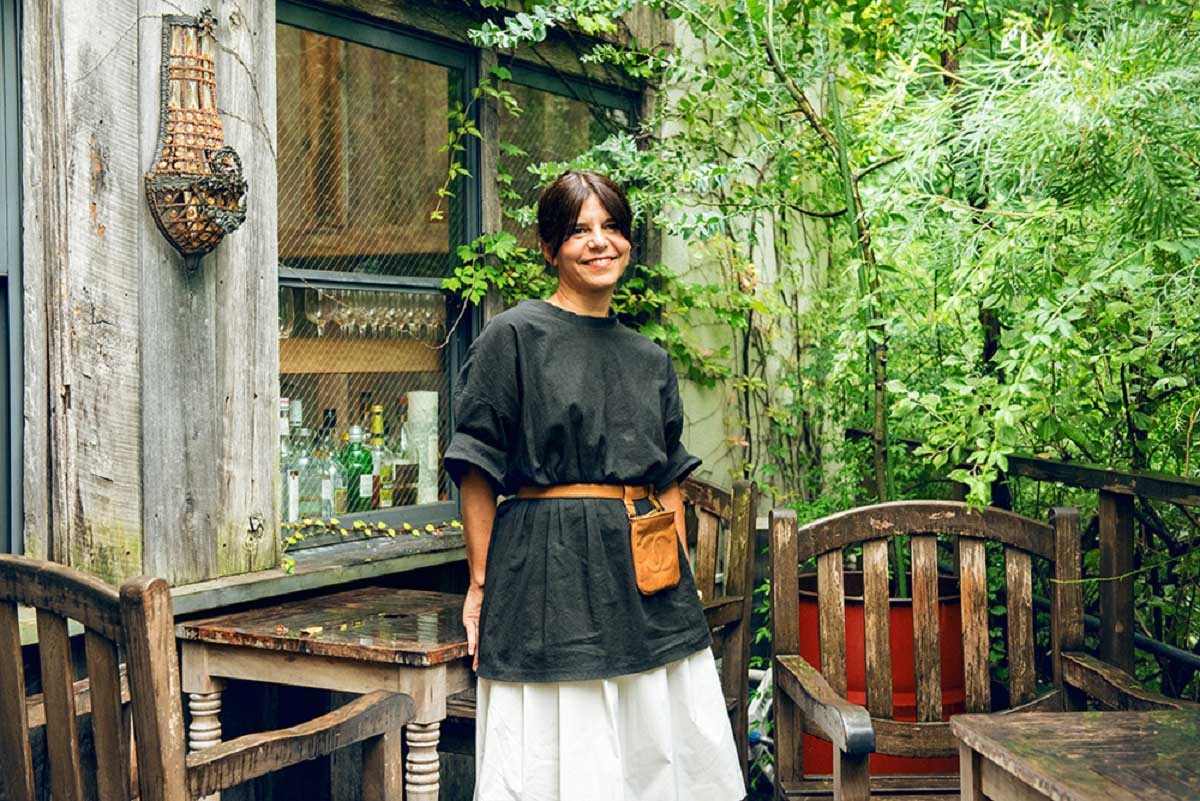 Today, Maydi’s eponymous brand is available in seven sales outlets in Tokyo, one in Osaka and from next season will also be in Hiroshima. The brand is also sold in London, Lyon and Dallas, and in Buenos Aires her products are available at Tienda Panorama.

The brand is centred around an environmentally friendly and sustainable approach and has begun using merino wool from the Valdés Peninsula which has the “Wildlife Friendly Certificate” - a seal awarded by a United States entity in charge of ensuring that certain standards are met in the production of fibre. 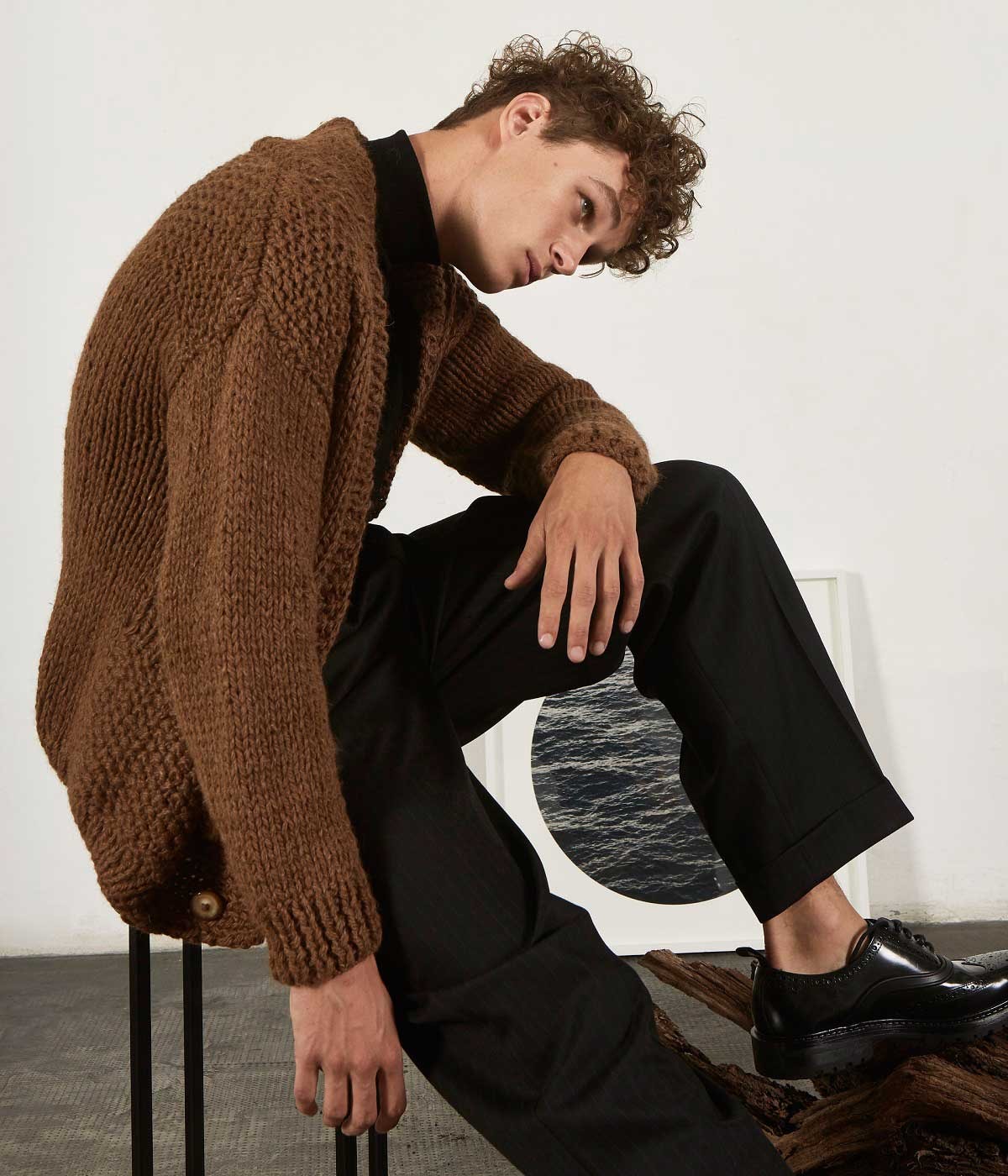 FashionUnited had the opportunity to chat with Maydi in Buenos Aires about her story, her brand and her interest in spreading Argentinian products around the world.

Despite having graduated as a designer, in your early years you were not exactly working in the creative field. How did you find that?

In Paris I mostly worked in the marketing and business sector, which brought me closer to the product. For example, at Rykiel, the creative team worked alongside the marketing team for all product development. This meant that I could get more experience in that area rather than just in the purely creative field.

What was it like to go from strictly marketing work to designing for your own company?

I felt that I had a creative side, and being constantly in contact with brands, it is impossible to develop something if you do not have an affinity for it. My boss Robert Dodd always said: "I think you have to create your own brand." I enjoyed the marketing side, but I really didn't feel it was the way I would be able to send out my message. Patricia Lerat, who was once the director of the famous exhibition Première Classe and was a kind of mentor to me, advised me to return to Argentina and try to launch my own project. 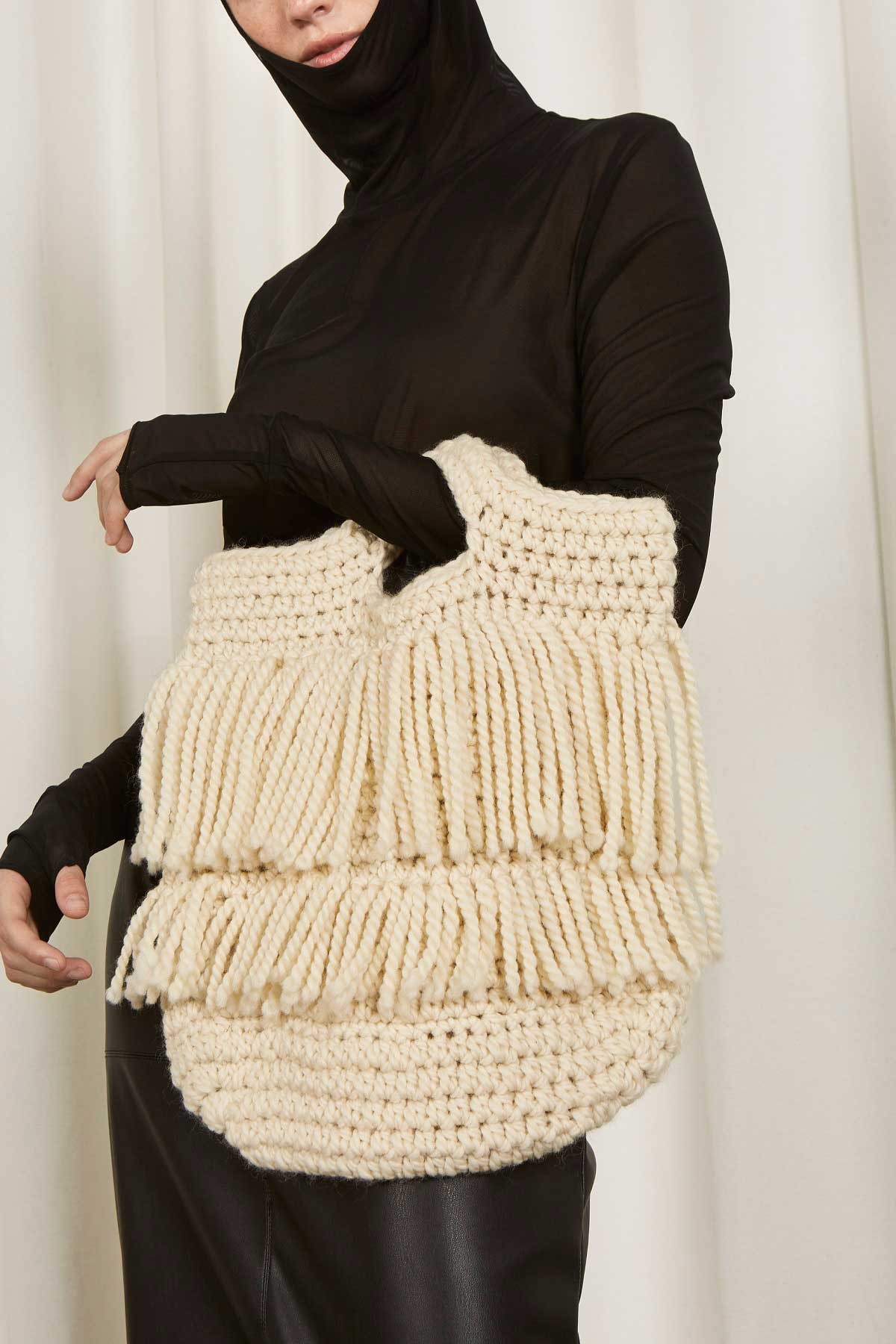 How was your return to Argentina?

I returned at the end of 2012. In the beginning I went for a few interviews at Buenos Aires fashion companies, but I realised that my European background would not fit in with people's way of working over here. So I started to think about what I could do, I asked myself what was good about the country, so that I could make use of it, and I started to research natural fibres. I didn't have much knowledge about materials, although in some way I had been in contact with that type of product while I worked for Rykiel and also for Alberto Marani, who created a line of knitwear for Balmain.

How did you start developing your materials?

I became interested in merino wool because Argentina is one of its main exporters. A supplier put me in touch with weavers in Buenos Aires and in 2013 I started with a very small line in accessories: handmade shawls, scarves, hats and gloves. In February 2014, Patricia Lerat invited me to participate in a fair in Milan, and the Italian store bought 50 products from me. For me it was a real challenge to be able to produce them all and from that moment, that's when the brand took off. My vision was always to reach Europe. 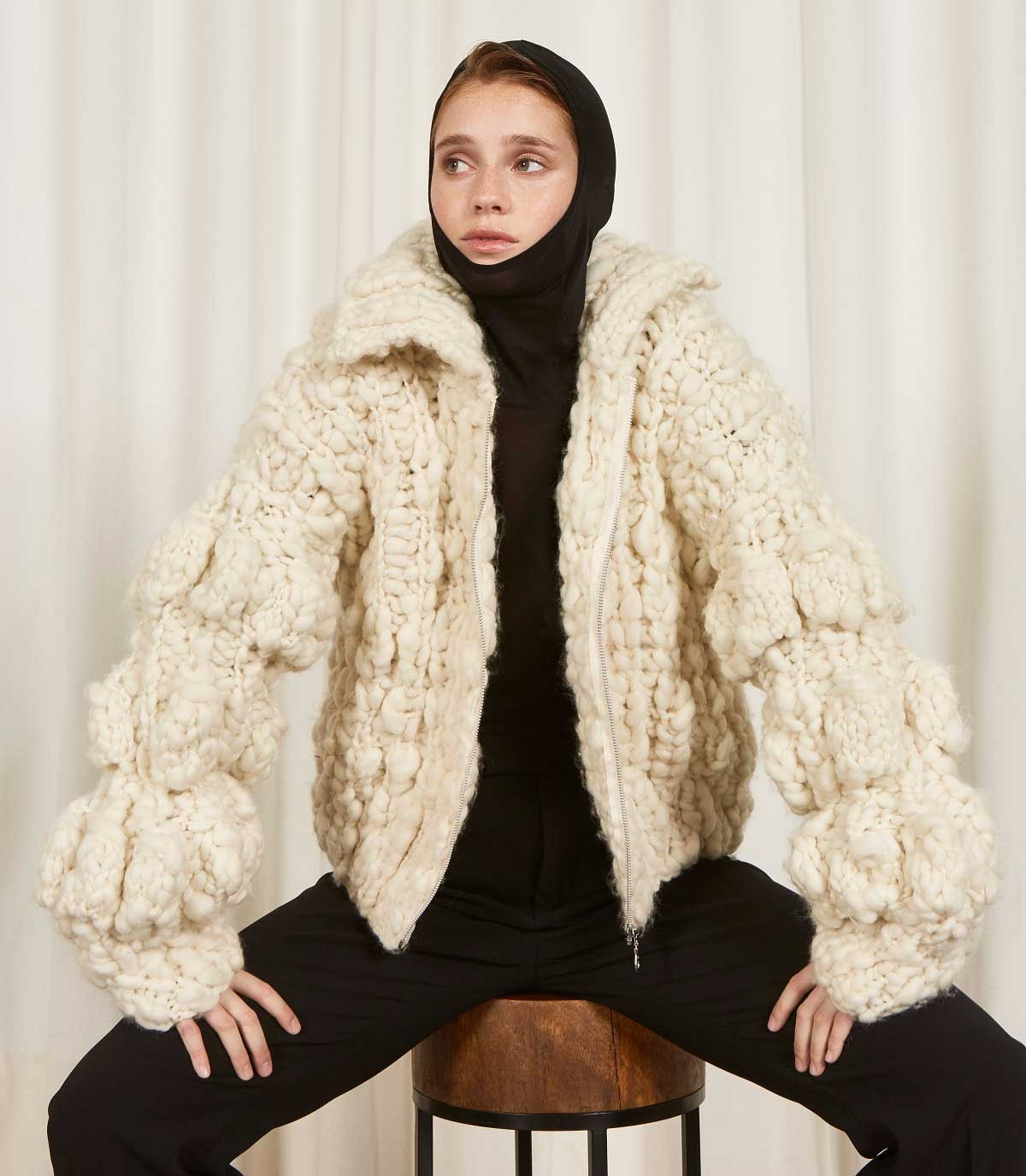 In 2015, I took my brand there for the first time when an Italian designer who worked in producing accessories and prêt-à-porter garments asked me to share a showroom during Fashion Week in the Marais district of Paris. I then had various meetings with buyers, and the store Solsis in Lyon ordered some products. This year, in addition to accessories, I have added a line of sweaters that I keep expanding on. I still attend Fashion Week twice a year to present my collections.

How important is the Japanese market to the brand?

When I went to Paris in 2017, many appointments arose with Japanese buyers with whom I made deals that were greater than what I was producing. So I had to add new weavers because I was working with just a few people, who could not cope with such an order - as everything is done by hand. Starting to work with the Japanese market gave me great security as a designer and as a brand because they are very precise and seek originality. 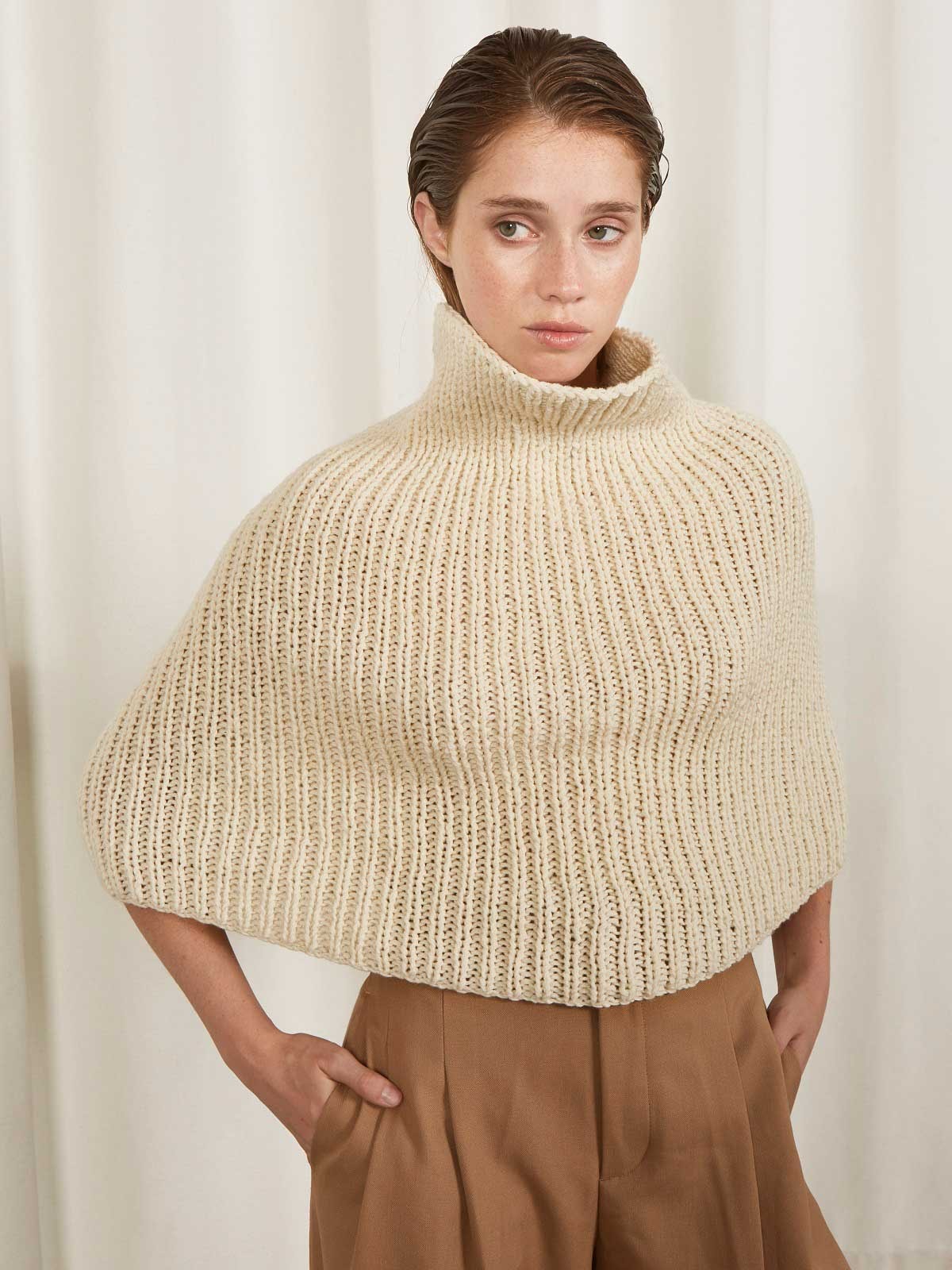 Why do you think your products are so popular overseas?

Camelids [alpaca, llama, etc.] are kind of exotic and rustic, and so the Japanese market for example, loves it because it is different and it represents the latest form of luxury. In Argentina, these fibres are hardly used, and it is good to introduce it to the world. As a designer, I feel that I need to tell the world that Argentina has all these fibres to offer.

Global Fashion Stories shares inspiring stories from fashion entrepreneurs around the world, as FashionUnited believes fashion professionals can inspire each other, no matter who they are or where they are.

This article was originally written in Spanish by FashionUnited Argentina editor Cynthia Ijelman before being translated into English.