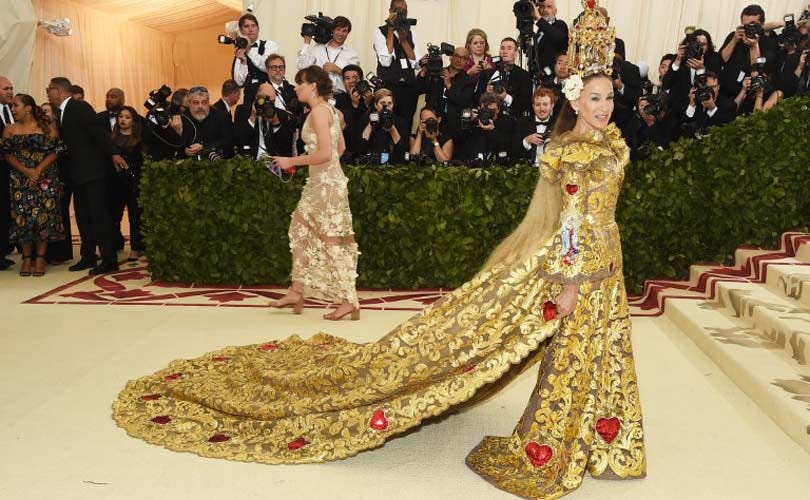 If there was ever a fashion industry red carpet event to rival the Oscars it is the Met Gala, the annual fundraising benefit for the Metropolitan Museum of Art in New York City, brings out all the major designers and celebrities to celebrate the museum’s latest fashion exhibition, and this year had an extra buzz as singer Rihanna and designer Donatella Versace are co-chairs, and attendees would be channeling the church for this year’s ‘Heavenly Bodies: Fashion and the Catholic Imagination’ theme. 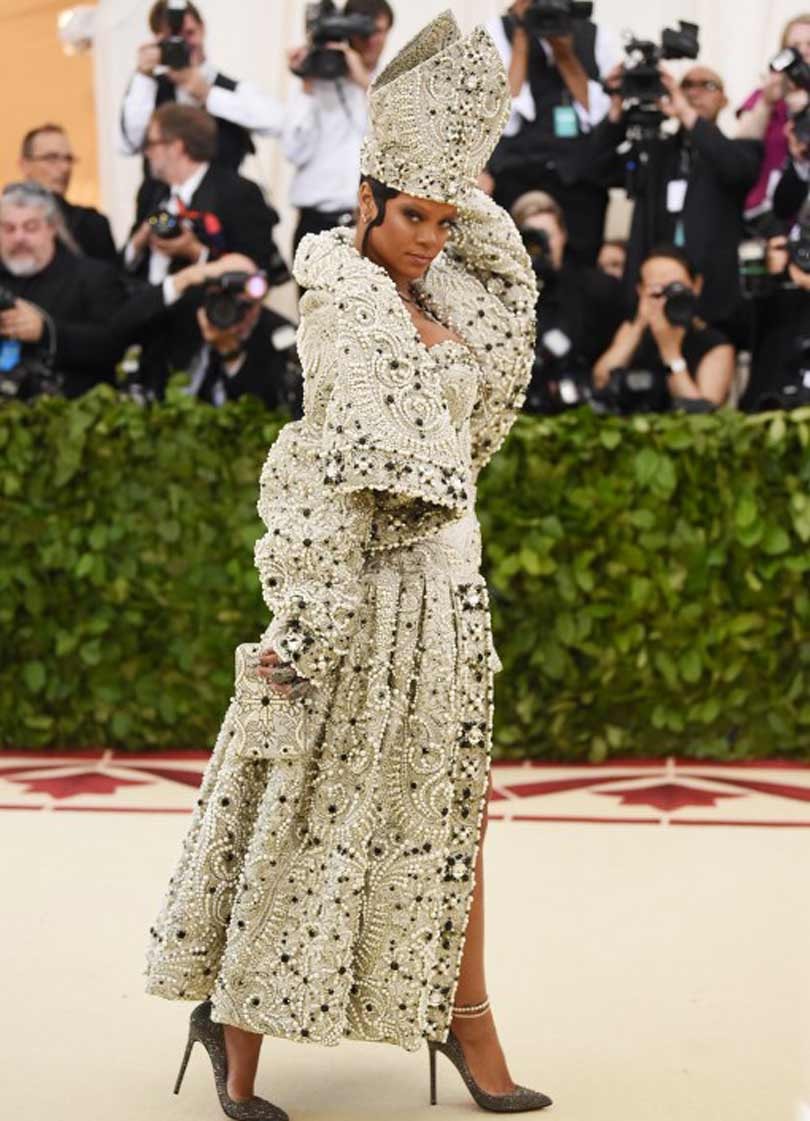 Never one to shy away from a theme, Rihanna made one of the biggest statements by fully embracing the “Sunday Best” dress code with her Maison Margiela Artisanal by John Galliano Pope-inspired dress and cape outfit, complete with ornate pearl and crystal embellishments and even a papal mitre.

Fellow singer Katy Perry also wowed in her heavenly approach to the theme in her custom Atelier Versace gold chainmail mini dress featuring life-size hand-painted degradé feathers for her angel-inspired wings, which has left some on social media to think she was auditioning to become a Victoria’s Secret angel. 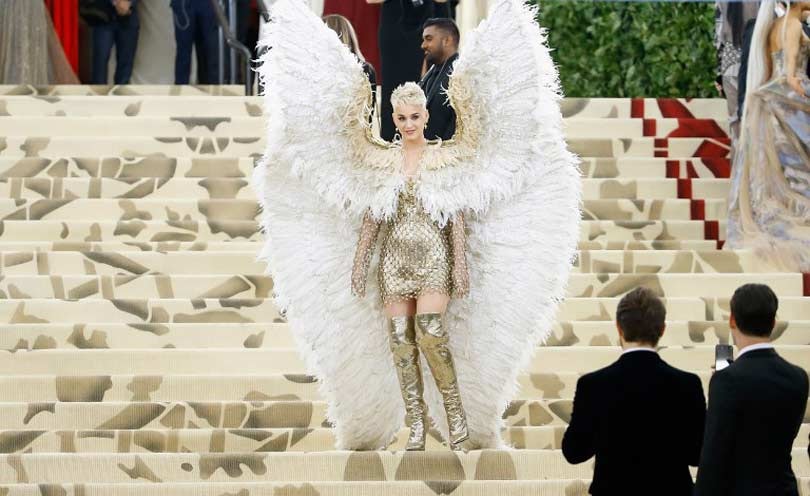 Another star that always interprets Met Gala themes so well is Sarah Jessica Parker who looked incredible in her Dolce and Gabbana Alta Moda corset gown with cathedral train embroidered with gold baroque embellishments and sacred hearts. If that wasn’t enough to fit the theme, the Sex and the City actress also wore an intricate nativity-scene headdress in gold filigree.

Other interpretations of probably the most controversial theme yet, saw celebrities and designers opting for celestial silver, virginal white, chain mail looks inspired by the Crusades, lots of crosses, elaborate gem-encrusted headpieces and designs inspired by medieval art and Catholic symbology and objects. 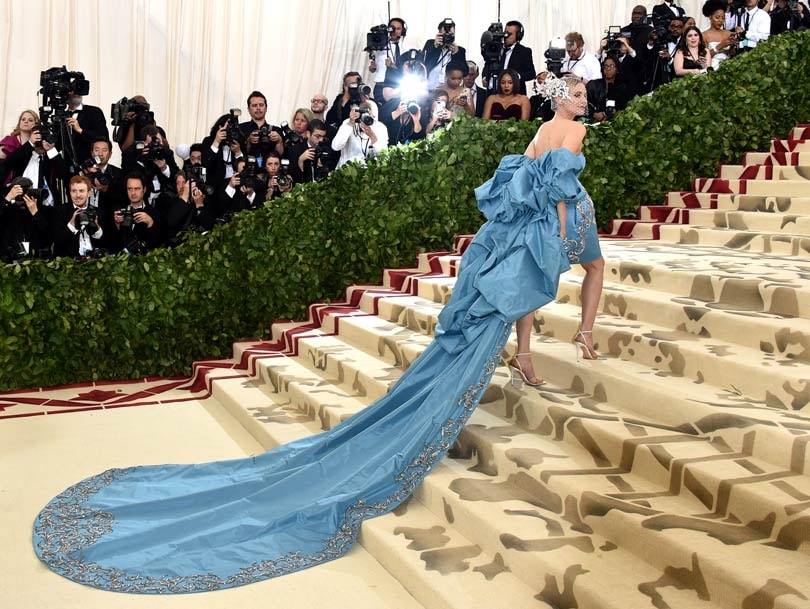 Diane Kruger opted for saintly-blue in her Prabal Gurung creation featuring gold filigree detailing and an elaborate train, which was perfectly teamed with a netted hair piece and high-end jewellery from the designer’s collection with Tasaki to create an angelic look.

Madonna on the other hand decided not to go for the purity path, instead was one of the many stars who wore black. The ‘Like a Virgin’ singer went for a theatrical look in her black Jean Paul Gaultier Couture ball gown, featuring a sheer cross cutout, a mesh black veil and an over-the-top gem-encrusted cross crown. 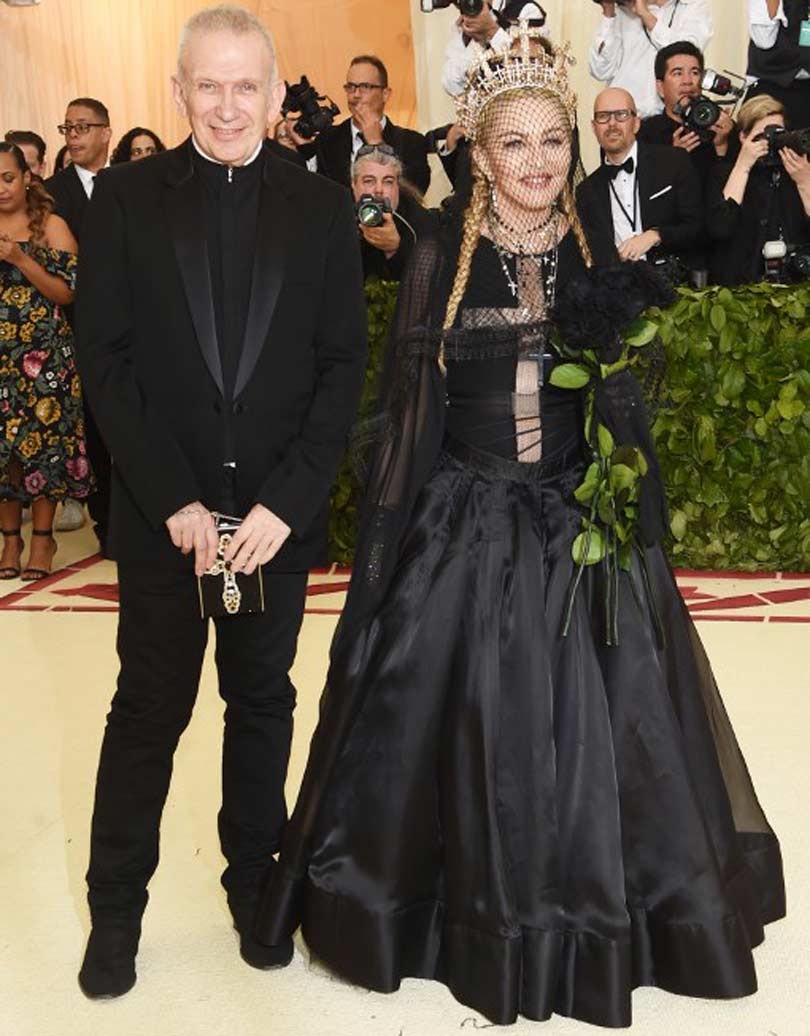 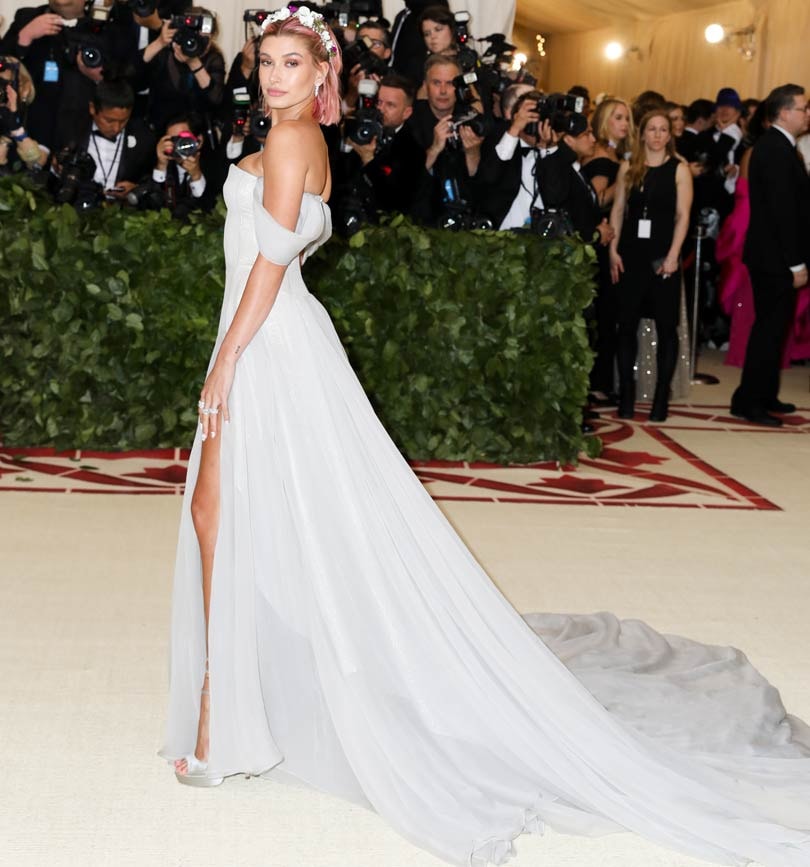 At the other end of the purity scale, model Rosie Huntington-Whiteley looked angelic in a custom embellished Ralph Lauren Collection gown and cape complete with halo headpiece, while Dakota Fanning looked ethereal in a one-shoulder Miu Miu gown, Hailey Baldwin paired her pink hair with a light grey corset off-the-shoulder Tommy Hilfiger gown with a high slit and train, and Kate Bosworth went for a gold-dusted Oscar de la Renta gown with Tacori jewellery in her virginal bride look. 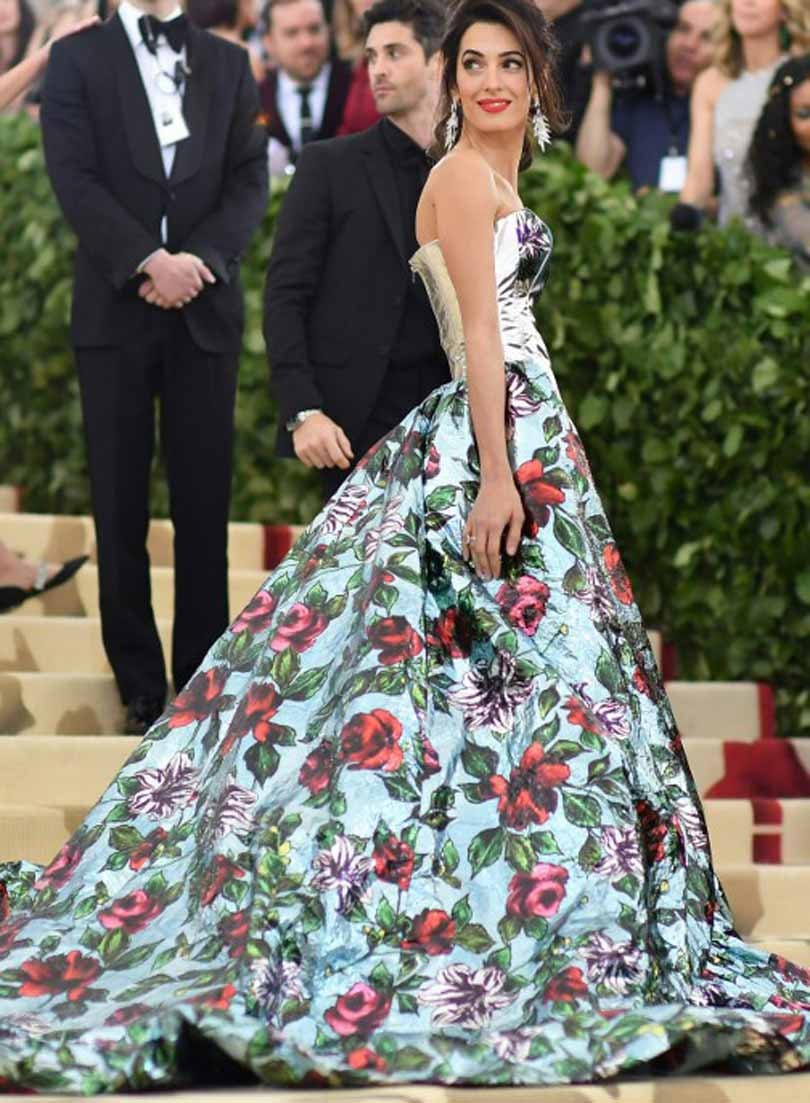 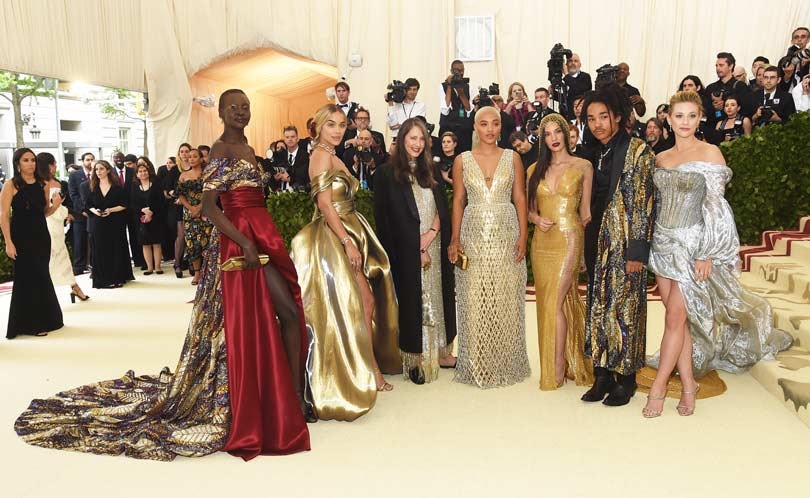 H&M creative advisor Ann-Sofie Johansson explains in a press release: “Designing these H&M looks for this year’s Met Gala has been an honour. Each look has been entirely custom-made, focusing on rich detail and a modern take on red carpet glamour. We wanted each of our guests to feel both serene and effortless.”

The stand out H&M look had to be model and activist Alek Wek who wore a draped, flowing gown that took inspiration from mosaics, featuring a long beaded train that was contrasted with a waist and skirt in deep red double silk, lined in gold and slit high at the front.

On wearing her custom H&M gown, Wek said in a statement: “The hand-beading and embroidery that has gone into this dress is extraordinary. It is so perfect to wear on this special night.”

To celebrate fashion’s biggest night, H&M has also created The Gala Collection, an exclusive capsule of four red carpet looks inspired by celestial glamour, including a silver sequin maxi dress and a short gold mini with fringing detail. Prices range from 119.99 to 399.99 pounds and they are only available online at hm.com, as well as at H&M’s 5th Avenue flagship store in New York. 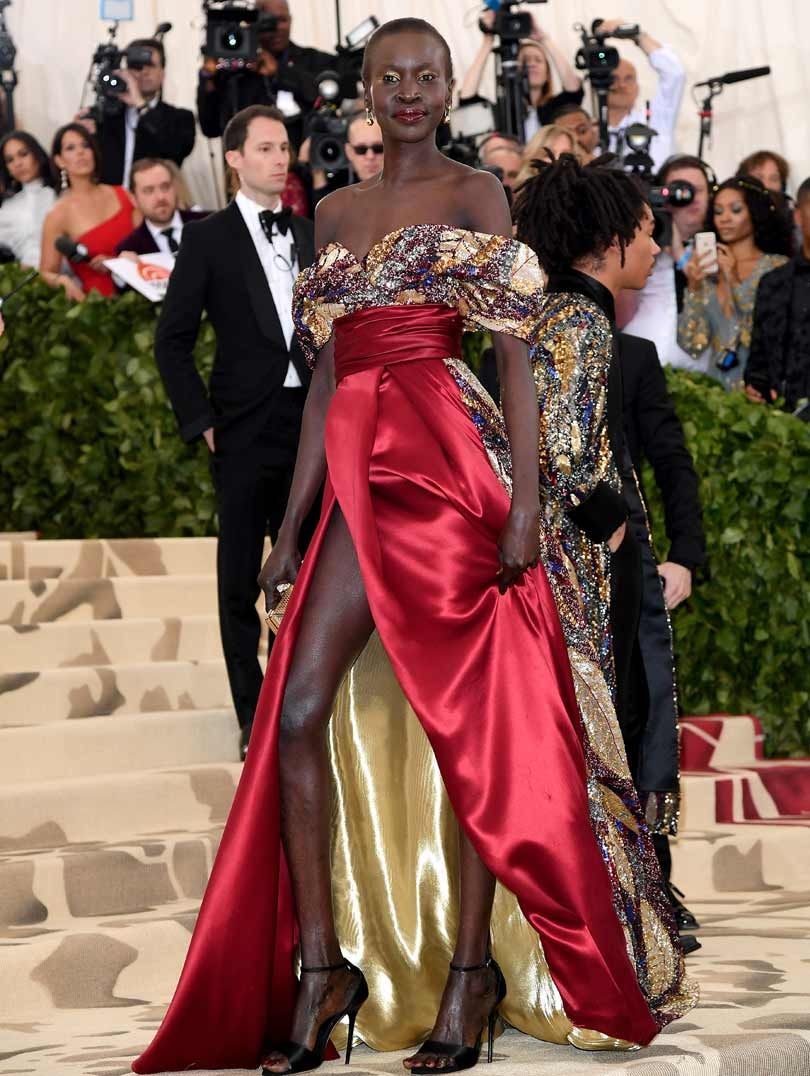