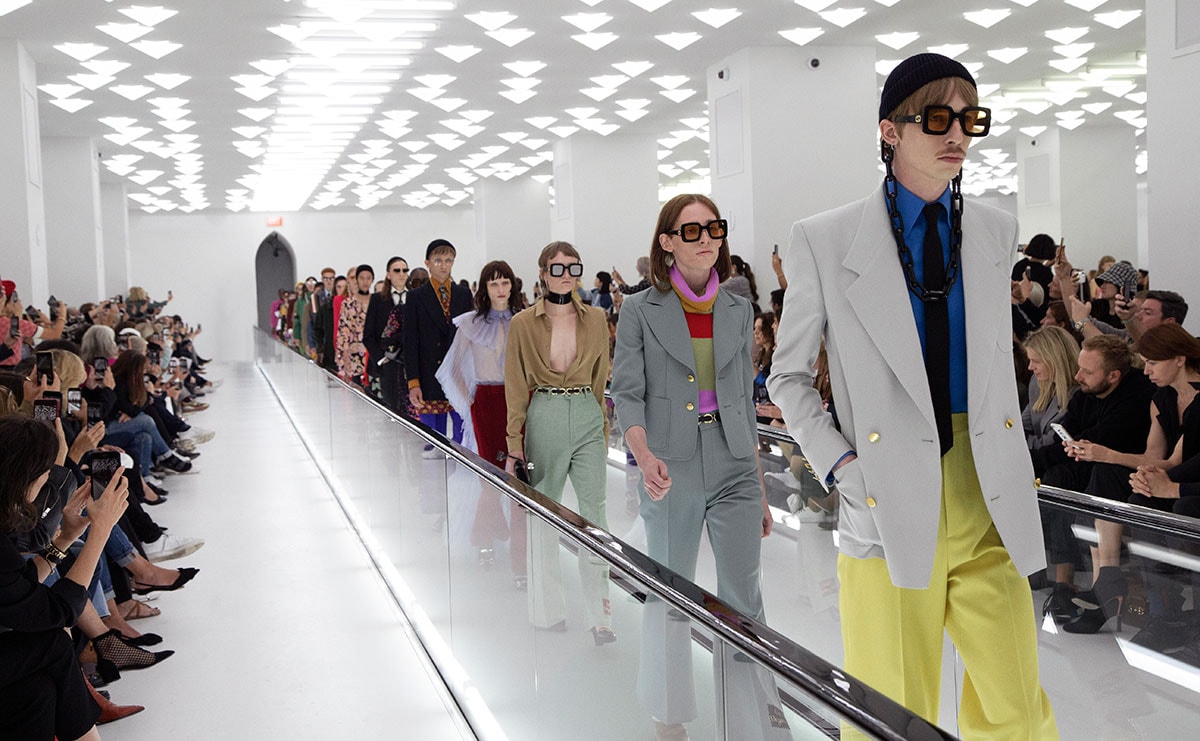 Milan Fashion Week SS20: social messages, references to the past and redemption

Milan - The number of visitors to the tradeshows of Milan fashion week have increased this year if only slightly. White Milano reported a 3 percent increase, while the 5800 visitors of the Super salon, was a little lower than the 5900 of September 2018. The week-long showcase provides a space for many varied propositions, including social and political messages, and in its own way welcomes the environmental demands of the new generation. In general, sustainability and eco collections made an appearance in Milan as did the commitment demonstrated by the Fashion Pact signed in August by 32 major fashion players (including Prada, Moncler, Ermenegildo Zegna, Giorgio Armani and Salvatore Ferragamo). Nevertheless, there are more than 500 ‘B Corps’ (a certificate for companies that comply voluntarily with the highest standards of responsibility and transparency in the social and environmental area) in Europe and of around 80 of those which are certified in Italy only one, Save the Duck, is a fashion name.

At the recently-concluded fashion week, designers of all participating brands demonstrated their creativity and craft. From Bottega Veneta, whose creative director Daniel Lee played with proportions, via soft silhouettes, to Aigner which, for its spring summer 2020 collection, bet on dimmed and refined tones on crêpe chiffon and lurex dresses with plissè details, in natural and metallic shades and with gilded sequins. 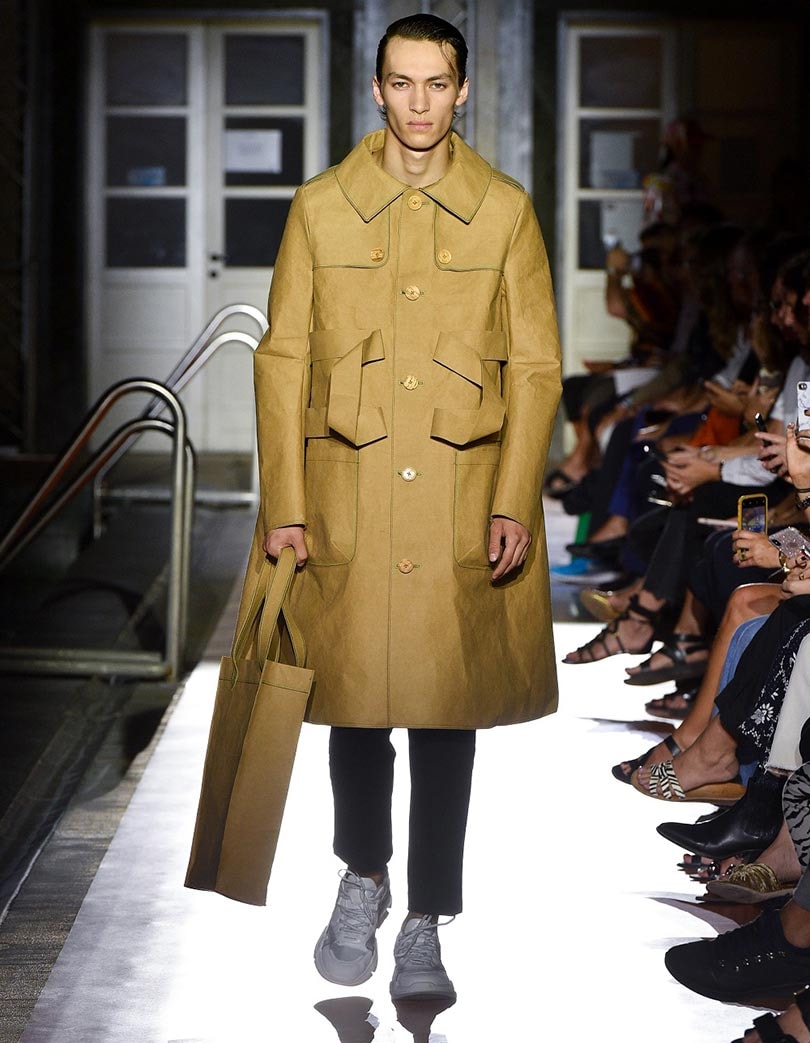 Benetton went to another level entirely, opening fashion week with a brightly coloured and entertaining collection, part of the underlying spirit of the Treviso brand, starting from the location, the fashion capital’s Cozzi swimming pool. Using a quote from 'Don Quixote of La Mancha' by Miguel de Cervantes, ‘Always hold the hand of the child that you were’, creative director Jean-Charles de Castelbajac, offered a reference by using tiny baby sweaters applied to the clothes for pockets, and at the same time for the brand’s attention to recycling and sustainability. The ecological mascot for this Benetton show was Popeye (Braccio di Ferro, or Anchor Arms, in Italian), or a plant-strengthened sailor defending the earth’s oceans from the bad guys.

This collection, which will be in stores from February, is called Colour wave, and it is the second one under the artistic direction of Jean-Charles de Castelbajac. A palette of pastel, pink and lilac, and even sky blue tones, which he referred to as the Bajac Pastels – the leitmotif on which the brand has created a wardrobe of cult items. The designer told FashionUnited that their offering incorporates the sailor, the waxed canvas pea coat, the pullover, the dynamic and chic office look, the unmatched male, unlined and easy bon ton 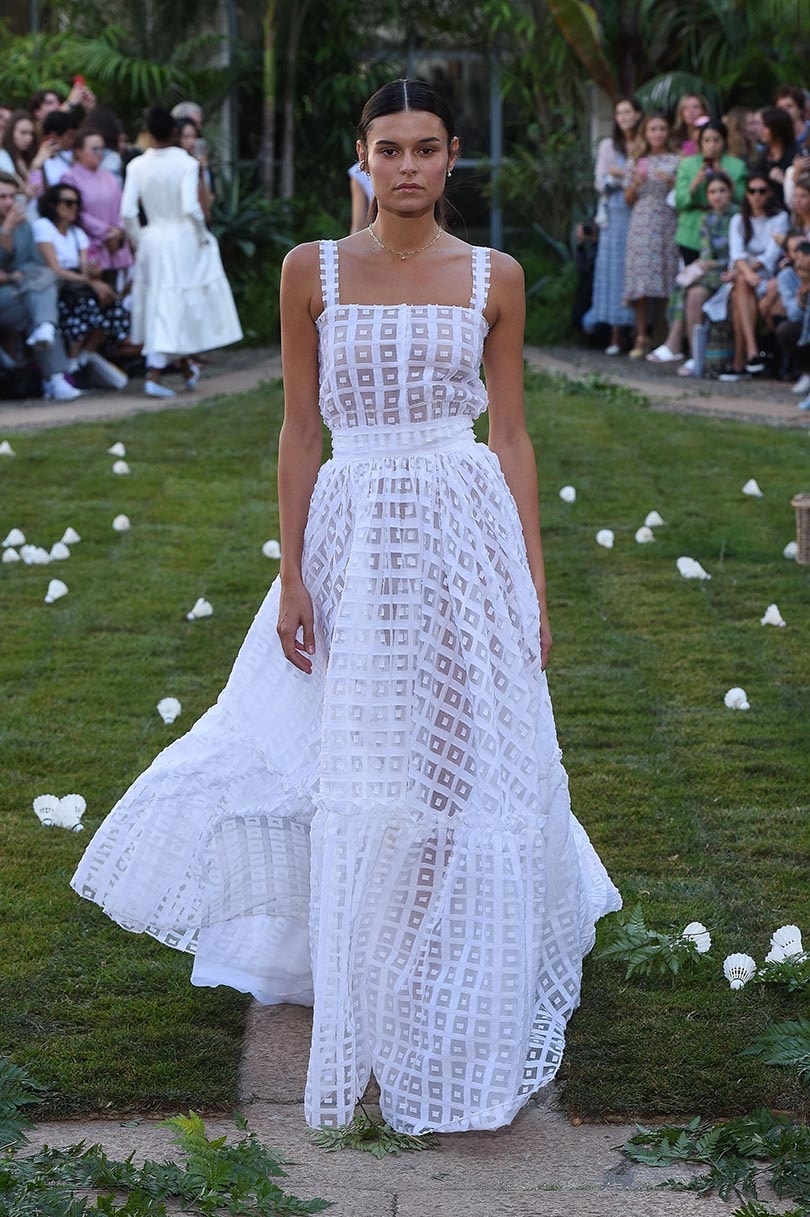 Gucci presented a whole new take on the uniform. The brands’ creative director, a master of conceptualism, seeks to impose, or rather dress, a desire for freedom and non-homogeneity which is the lifeblood for those who buy fashion. The brand again managed to catalyse the attention. Gucci, which has been under the creative helm of Alessandro Michele since January 2015, has become one of the leading brands of the Kering group. 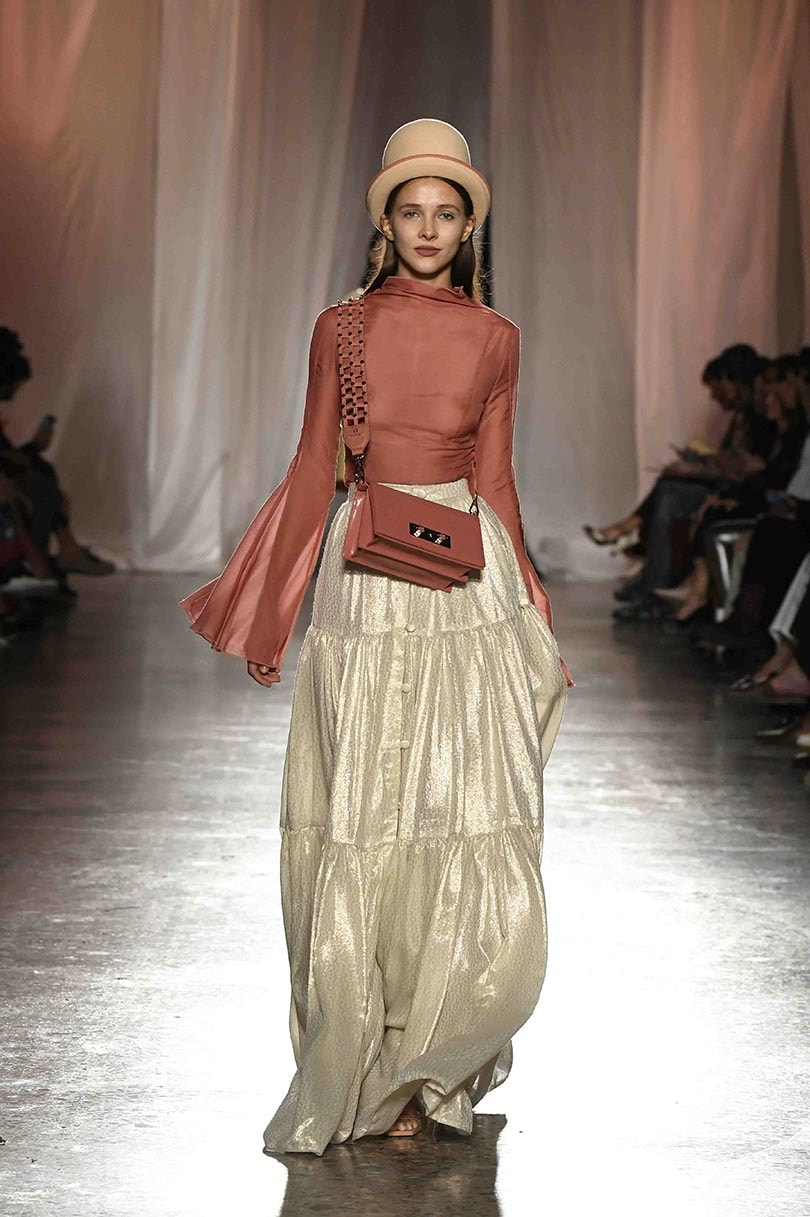 The show, which saw motionless men and women appear on a conveyor belt wearing uniforms, work clothes and straitjackets, thereby illustrating the most extreme version of uniforms imposed by society and those who control it. “These clothes had the function of conveying a precise message and are not part of the collection available for sale”. Presenting them, Alessandro Michele wanted to express how power is exercised in life, via fashion, to eliminate self-expression: “a power which, by establishing social norms, classifies and restricts personal identity”. The fashion house was quick to explain in a press statement because, just as happened a few seasons ago when the models walked the catwalk in an operating theatre, this time again the presentation created controversy by referred to clothing and systems for restricting us, as if in a psychiatric hospital.

The antidote to this concept was the “89 looks of the Gucci spring summer 2020 collection, which convey the concept of fashion as an instrument of exploration and self-expression, cultivating beauty and making diversity sacrosanct”, the fashion house’s notes explained. And from this form of social control, Michele told us, “I have detached the current trend”. Overall, as a form of therapy against homogeneity and social control, the brand is offering men’s and women’s collections with a vintage flavour but not too much. A green light to the 70s, bodies and dresses with sequins from the 80s, lace and slips.

There were also shirts and blouses and sheer tops matched with men’s close-fitting trousers. There was no absence of eclectic patterns and plays of colour. Overall, serious but not too much so, homogeneous maybe but with a good dose of eccentricity and especially messages of freedom and anarchy.

Prada, which recorded a revenue growth of 2 percent to 1,570 million euro in the first half of this year, also used the concept of personality and style without frills. Miuccia Prada wanted to tell of the power that women exercise over clothes. The runway presented a kind of implicit nonchalance that illustrated the moment the clothes are put on. References to past decades were seemingly accidental, stylistic homages more than fashion clichés, silhouettes and shapes that define specific times such as the 20s, 70s and 90s. 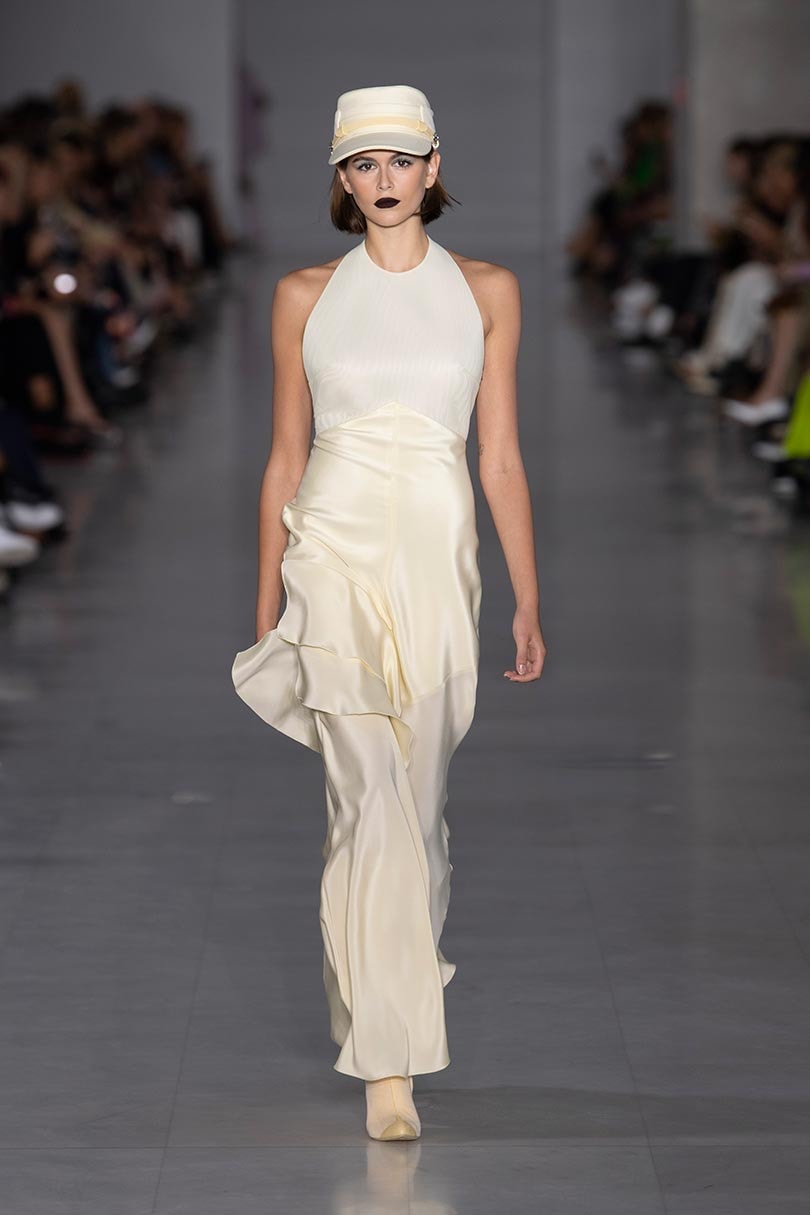 Timeless but referring to a gentility and confidence of other times were the clothes of Luisa Baccaria. The show for her next spring summer collection recreated Milan’s Villa Reale (Royal Villa), in which models wore long and intangible lace blouse dresses, Sangallo lace and soft trousers with blouses with three-quarter cuffs and applied pockets. Garden flowers were transformed into prints on backless items.

Fashion week in Milan officially took place from 17 to 23 September 2019. This season there were 58 scheduled events, and 110 catwalk shows on the calendar. These included Herno, the emblem of Herno Monogram, a fabric inspired by the 50s and enjoying a revival in the new logomania trend. The new monogram became the basis for the creation of a series of items dedicated to the rain, in the cotton jacquard version with beige background and sequences of the letter H in the colour of the Sicilian traditional moore’s head or in nylon with a letter H in matching shades.

Bags also featured, thanks to the luxury bags of architect and designer Hussain Harba. The bags, a limited edition of the Mini-Home capsule collection, were created by the architect together with his daughter Alia and are already known by an international audience of aficionado's. Registered with Euipo (European Union intellectual property office), the bags are produced in Italy by professional craftsmen. The materials used include python, crocodile and ostrich. And clasps are made of an alloy of silver and steel created by an Italian artist and registered with Euipo or plexiglas or bamboo.

Francesco Paolo Salerno has an international clientele, particularly American. The stylist from Apulia, born in 1979, founded a couture brand that became ready-to-wear. His USP, loved by Christina Aguilera and Dita Von Teese, and Italian actresses such as Claudia Gerini and Lucrezia Lante della Rovere, resides in his ability to unite a sophisticated, high fashion aesthetic together with a free spirit, which moves away from clichés and features innovation from the more urban sportswear, “for a new angle on everyday chic looks”, is how the designer described it to FashionUnited. His outfits present nature relived with modernist accents, while spring prints sketch out small strawberries with acid green borders and sprays of ink splash coloured polkadots on skimpy clothes or effervescent blouses, with the result somewhere between caprice and inflexibility.

The Super and White Milano fairs

The Ascari spring summer collection is strict and sartorial. The Sicilian brand presented its collection for next season at White Milano. Founded by Federica, Pietro and Marta Mazzettini, the label makes room for minimalist lines, natural and precious fabrics, “Sustainability is in our DNA and it derives from a love for and appreciation of quality”, Pietro Mazzettini told FashionUnited.

Faux leather and PVC were used by Federica Vaccaro for her Bibi Bag label, which also showed at White Milano, also in a section set aside for Sicilian brands. The designer pointed out that “There is a need for ecological leather”.

White Milano, which closed its doors having seen 27,934 visitors (up 3 percent over September 2018) and with a 2 percent greater number of buyers (more than 9 percent foreign, while there was a 1 percent drop in Italian buyers), presented “a brand mix that was of huge interest for the major buyers”, according to the show founder Massimiliano Bizzi.

The buyers attending according to the organisers included Bon March, Galeries Lafayette, Harvey Nichols, Selfridges, El Corte Ingles, Bosco dei ciliegi and Isetan. "An extraordinary year", remarked Bizzi, "not only for the significant increase of foreign buyers but in particular for the high level of quality.

The nearby house of Super, showing accessories and women’s ready-to-wear organised by Pitti Immagine which, like White Milano is held on via Tortona, recorded more than 5800 buyers attending from 50 countries, with increasing numbers from France, the United States and Holland, with an increase also of Italian buyers. Super presented more than 100 brands’ collections for spring summer 2020.

“The goal of Super is offer a precise format every six months: we want to give our audience a product experience and a very targeted indication of trends, able to meet the purchasing deadlines and the specific requirements of international buyers”, explained Agostino Poletto, general manager of Pitti Immagine. The fair took place at the same time as White Milano, which is a lot bigger. “We wish to offer buyers - who at this time of year have already spent around 70 percent of their budget for the next summer season - something sophisticated and interesting to complete their orders and stock their stores”, Poletto told FashionUnited. “Let’s say that Super is a hybrid between a fair and a show, with a definitely more limited offer but able to show brands that in some way complement each other”. “We’re talking labels, including artisan, with products at the right prices”, Poletto added.

Special guest at Super was Vivetta, which launched its collection of shoes, exclusively created in Italy by the Venetian firm Be71. The first collection of shoes includes sandals, heels and ballerinas, all models defined by a gloss pink insole and feminine Vivetta profile printed on the sole. The line was developed in a range of materials from patent leather to satin. Swans, cats and red-painted nails form the motifs for the collection.