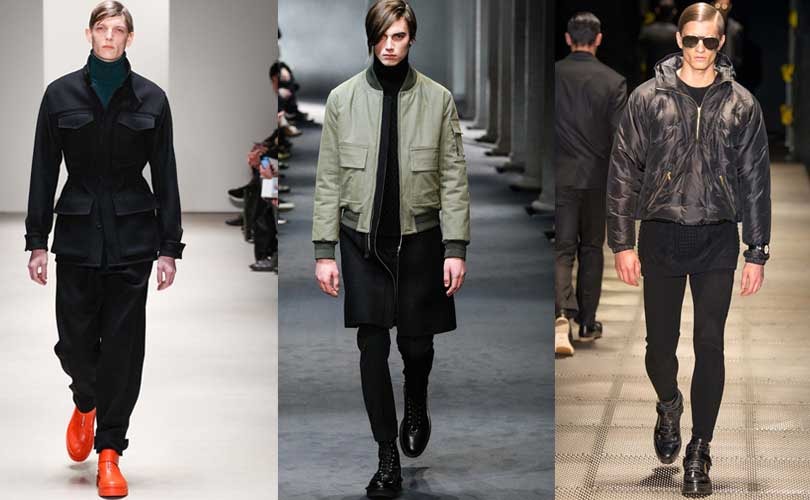 Jil Sander saw its first men's collection under new creative director, Rodolfo Paglialunga, who previously cut his teeth Prada, Romeo Gigli and Vionnet. The Jil Sander legacy has been a tough act to follow since the departure of Raf Simons, but Paglialunga embraced Sander's precision minimalism with oversized coats and baggy trousers that kept the shape with belts at the waist. Elsewhere waffle knits were tucked neatly into trousers and tracksuit bottoms, giving it a clean contemporary yet 70s look.

Neil Barrett, the Milan-based British born designer, continued his utilitarian aesthetic to provide the go-to wardrobe for urbanites. Outerwear included military parkas and bombers as well as knitted fabrics such as Crombie coats and trucker jackets. Details included large utilitarian pockets on parkas and classic tailored coats. Trousers were pleated and cut low. Tailored jackets were combined with crisp cotton white shirts and knits, perhaps bringing out his English sensibility. This season there was a move away from his signature bonded and printed sweats with a greater focus on knitwear.

Versace let go of its bold logos and prints and delivered softness for autumn/winter 2015. In fact it wasn't until the 10th look that a more 'typical' Versace outfit was shown, with a black bomber, gold hardware, skintight trousers and blacked out sunglasses. The show, instead, opened with tailoring, mostly in neutrals or checks. Jackets had gold buttons and closures, which may have been a give away, but there was silhouette and luxury behind Donatello's new Versace man. Fine, elongated knitwear was layered under jackets and separates, including a chunky cream fur coat. "Versace stripped," Donatella stated before the show. "No decoration, no color, no print. Just the soul of Versace: silhouette and cut."

Philipp Plein's parties are probably as renowned as his catwalk shows in Milan. This season the designer didn't disappoint, with Snoop Dog performing in a boxing ring that also doubled as the model's exits. The clothes themselves were street luxe, with logo sweats, panther motifs and croc-effect mink hoodies. Leather was key element, detailed with python and alligator, this is not a collection for a fashion purist or minimalist.