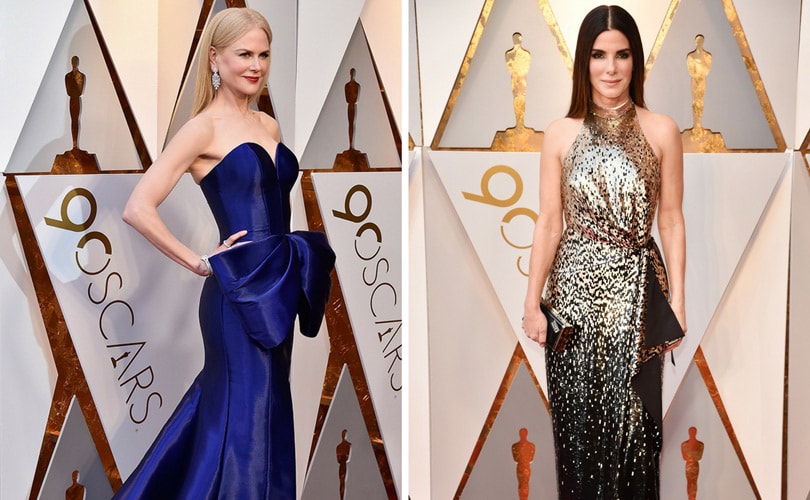 Oscars 2018: All the red carpet trends

Last night saw the final red carpet of the awards season at the 90th Academy Awards in Los Angeles and it was a riot of bold colours, bows, sparkles and understated activism, with the Time’s Up buttons still going strong.

Unlike the Golden Globes and the BAFTAs, where the unwritten dress code was black to show solidarity with the Time’s Up initiative to combat systemic sexual harassment, abuse and discrimination across all industries, the celebrities hit the Oscars red carpet in a more upbeat and hopeful mood in a wash of rainbow hues. 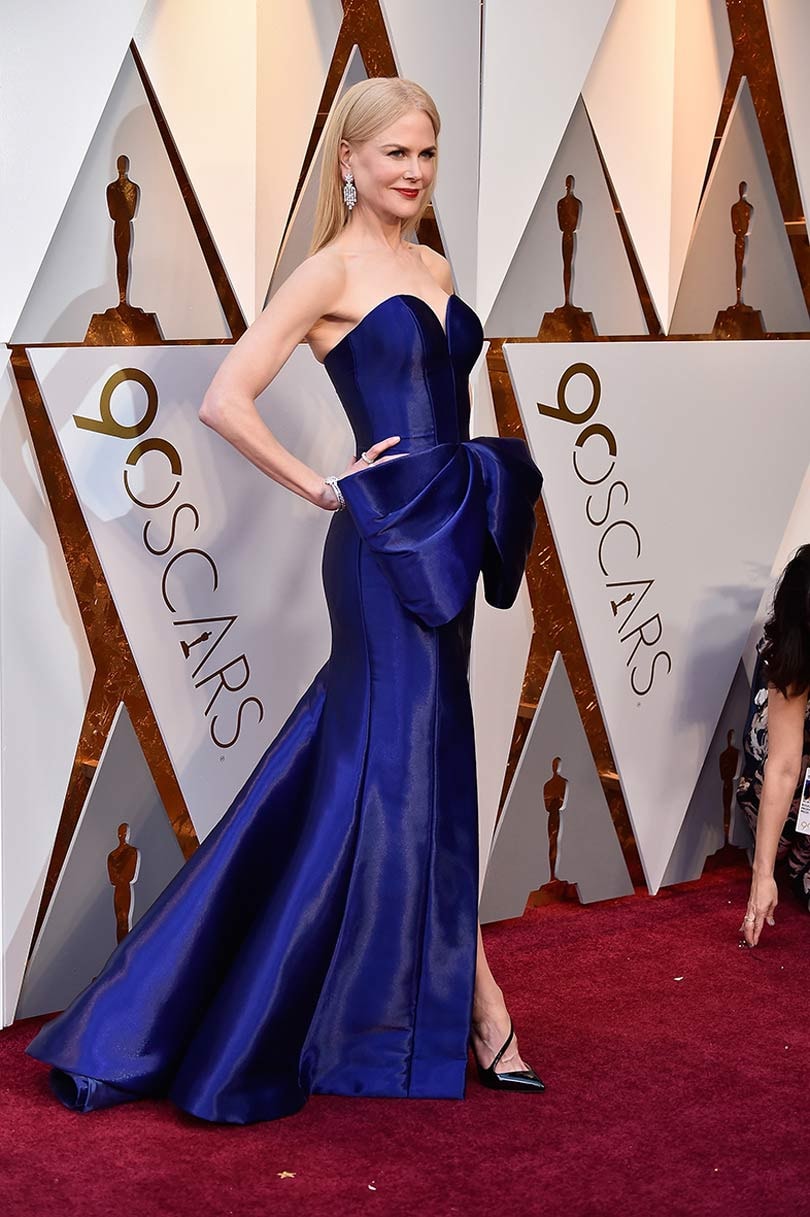 Bold statements came from Nicole Kidman, who continued her reign as queen of the red carpet in a striking strapless cobalt blue Armani Privé gown, while Viola Davis, continued her love affair with vibrant colours with a gorgeous custom bright pink crepe-cady Michael Kors Collection gown featuring bead-and-sequin embroidery that was paired with a matching clutch.

There were also a number of red gowns, including Oscar-winning Best Actress in a Supported Role Allison Janney, who looked beautiful in a plunging Reem Acra gown with flowing sleeves, while Meryl Streep went for a simple red Christian Dior Couture gown with three-quarter sleeves, and for the men, Armie Hammer worked a custom red velvet tux by Giorgio Armani. 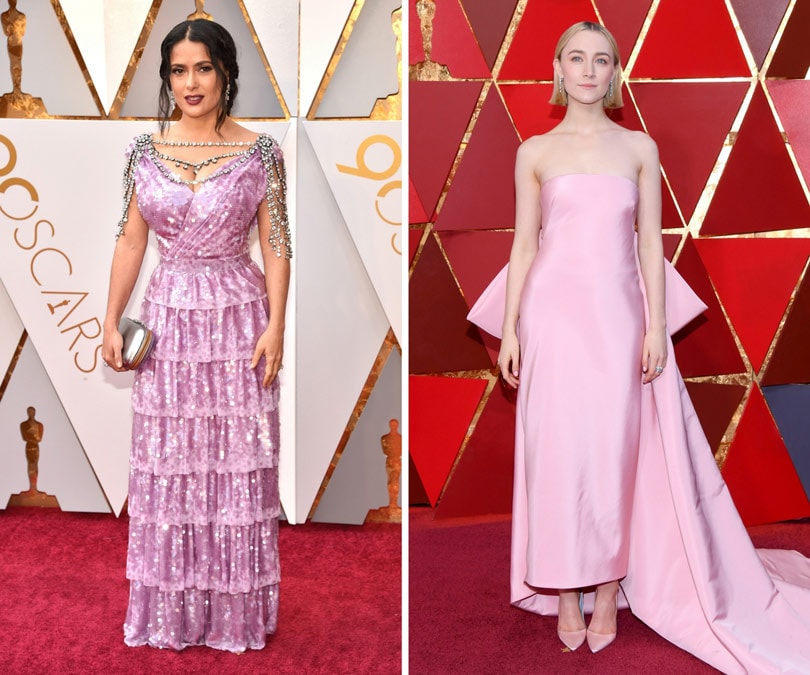 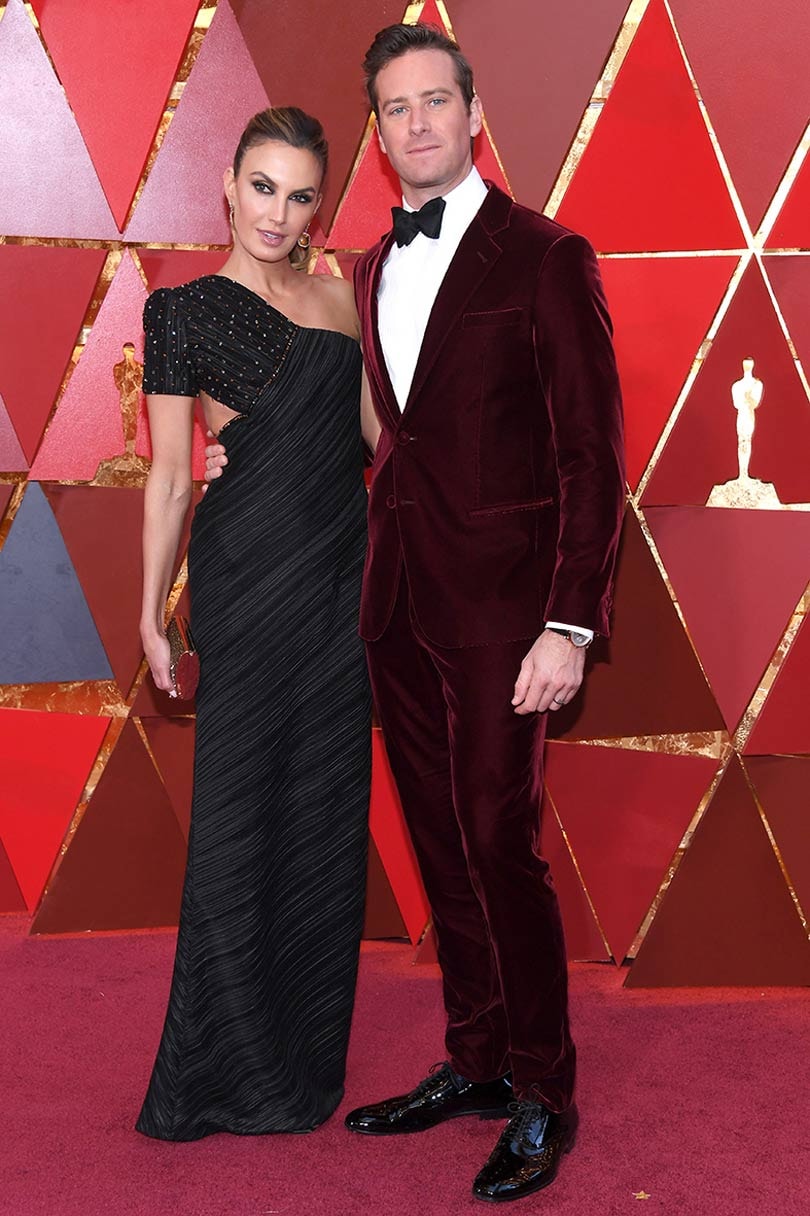 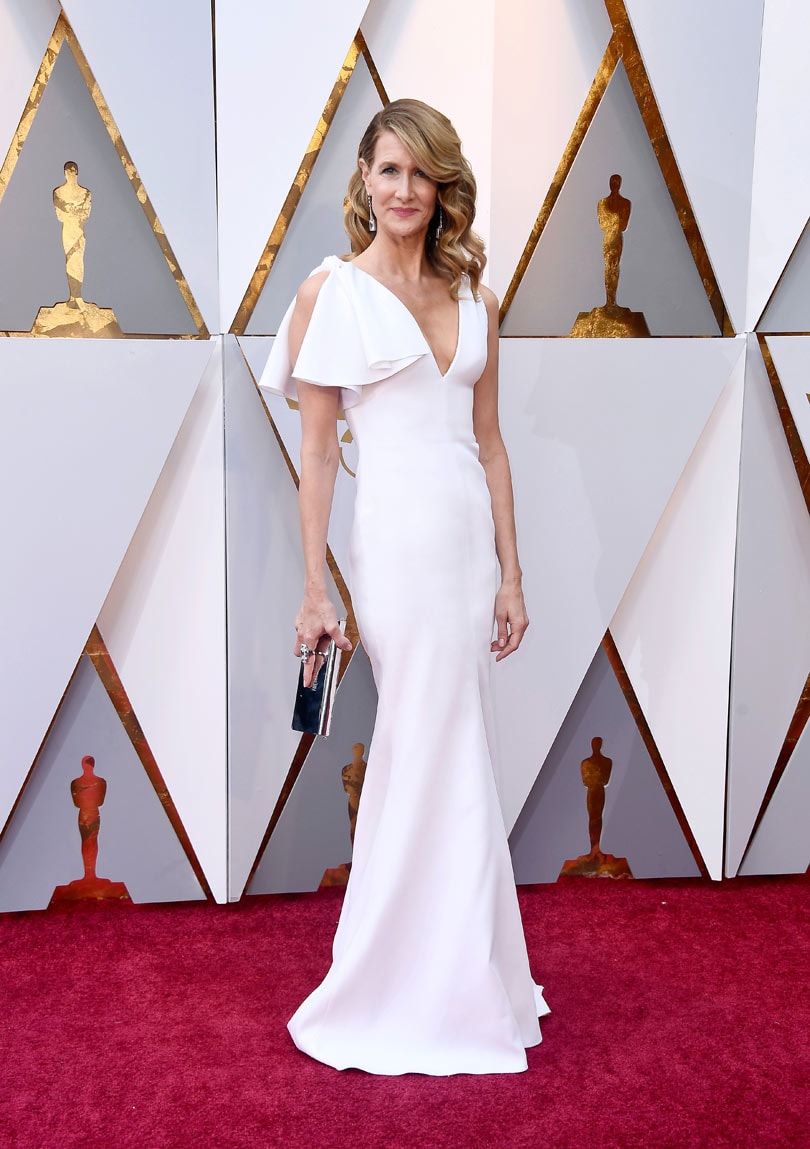 As well as bold colour, pure white was a big trend on the Oscars red carpet, maybe as a subtle nob to the suffragette movement, which embraced the power of fashion for its cause wearing white for purity, green for hope and purple for loyalty and dignity.

One of the most striking white looks came from Laura Dern who wore a Calvin Klein by Appointment silk crepe dress with a draped tie at the shoulder, it had a fluidity and regal elegance that shined on the red carpet. White was also embraced by Jane Fonda who wore a sculpted Balmain gown with a geometric neckline and Chopard jewels, and Mary J. Blige who was nominated for two Oscars wore a while silk cady Atelier Versace gown with linear draping detail and an asymmetrical neckline featuring a Swarovski crystal-encrusted bodice.

Nominated actress Margot Robbie, who has dominated the red carpet this award season, debut her new role as a Chanel ambassador wearing a custom white gown by the French fashion house. The simple strapless column silhouette was elevated by off-the-shoulder embroidery accents. 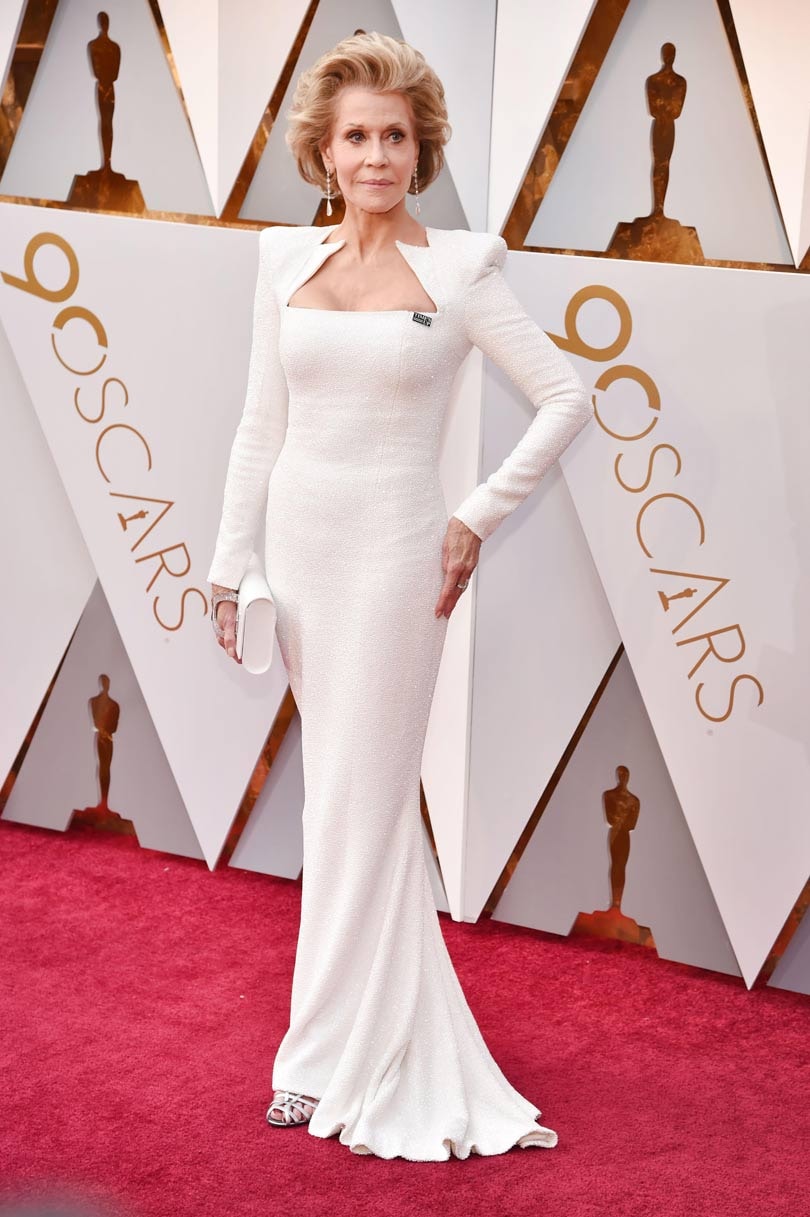 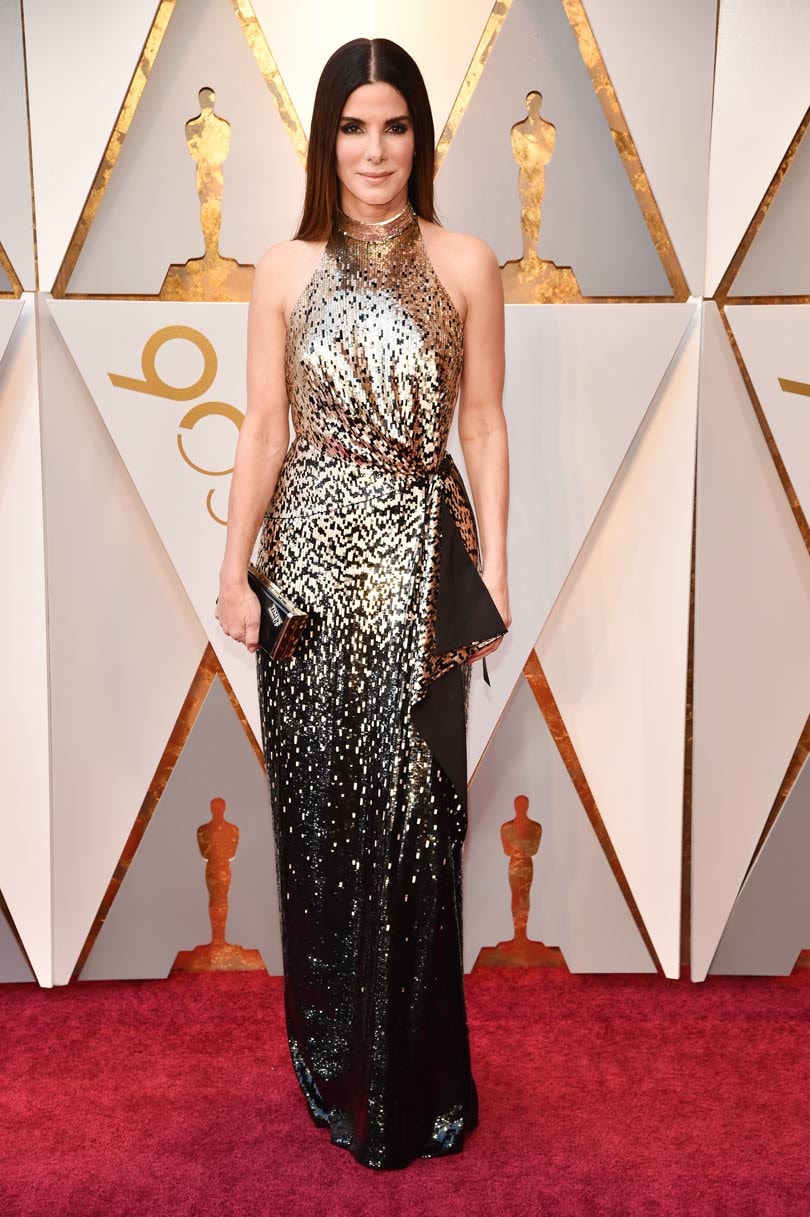 Shimmering gowns isn’t unusual on the red carpet, but last night a number of actresses made a metallic statement including Sandra Bullock who looked gorgeous in a custom Louis Vuitton silk gown embroidered by hand with black and gold sequins.

Often the craftsmanship of red carpet gowns is overlooked, but this Louis Vuitton gown featured more than 100,000 paillettes and took 500 hours of hand embroidery, with the combination of shinny and matte paillettes/sequins applied to create an ombre effect of gold and black tones. 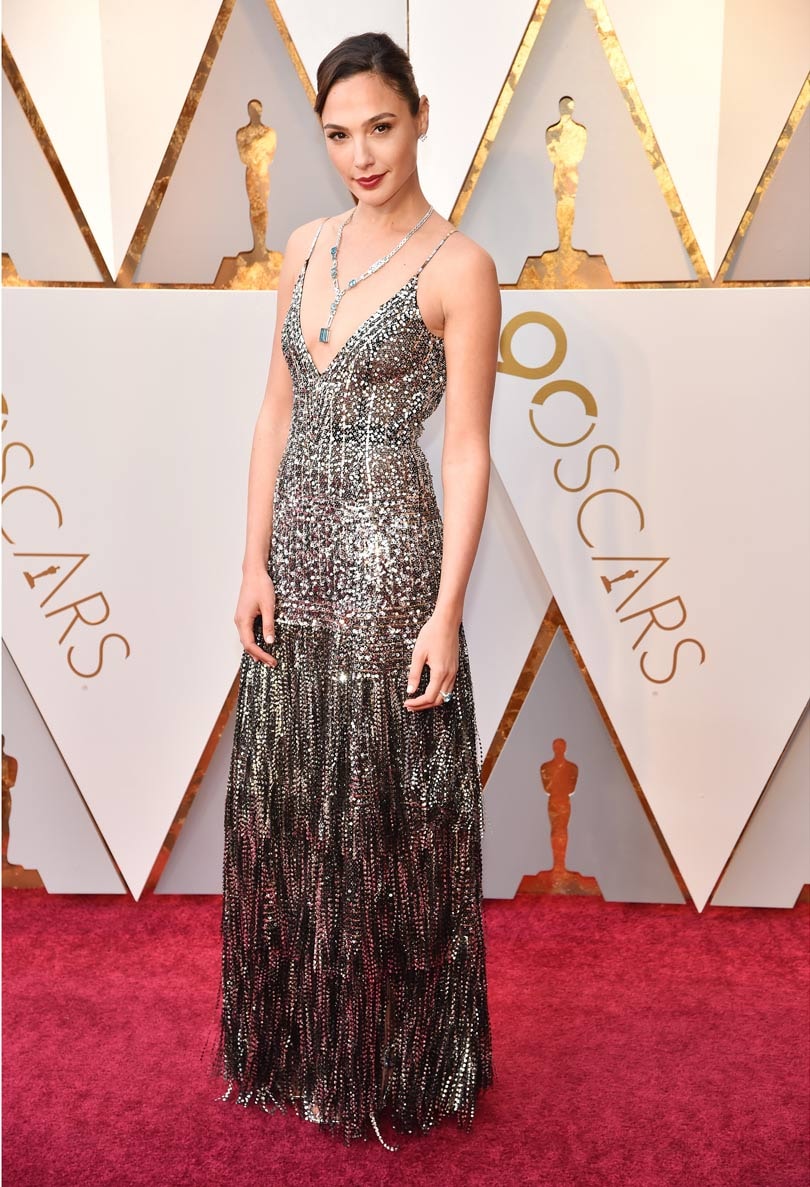 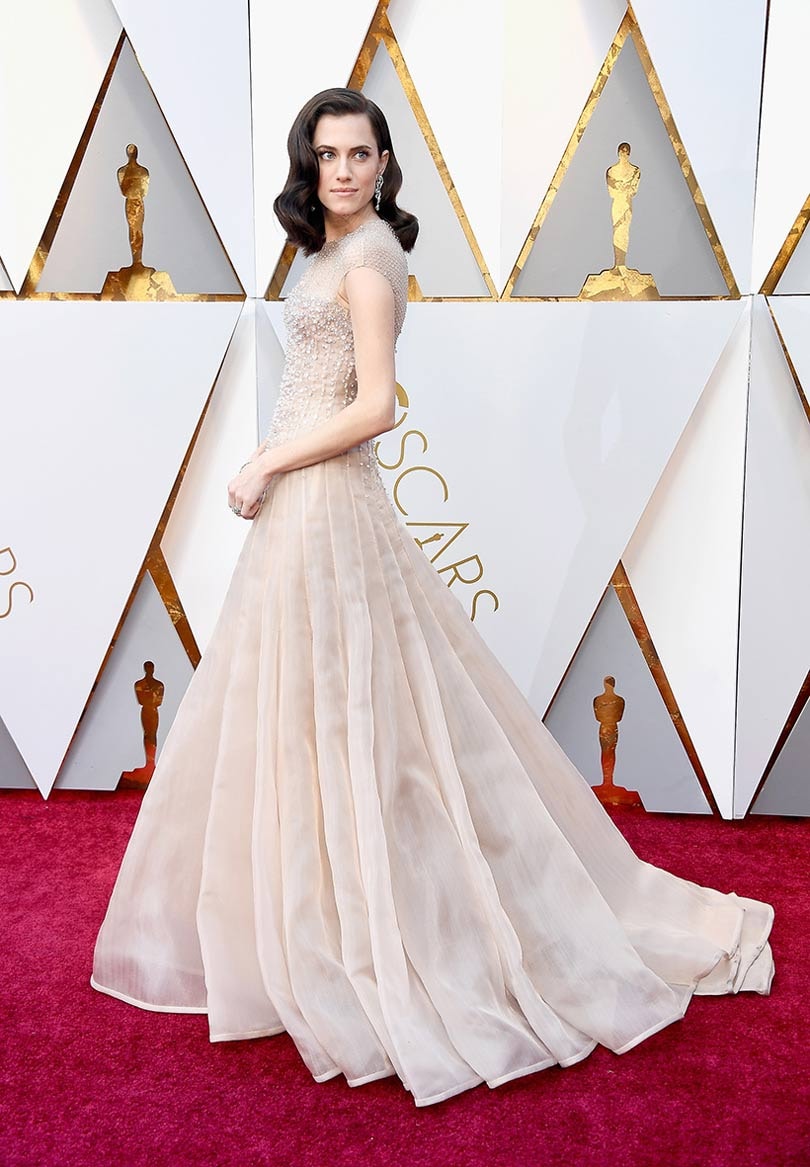 The final trend of night was keeping it neutral with blush tones and sparkles, with Allison Williams in Armani Privé leading the pack with her nude bejewelled Princess gown, while Elisabeth Moss teamed her embellished Dior with her Time’s Up badge, and Emily Blunt looked ethereal in an aqua silk polka dot tulle Schiaparelli Haute Couture gown that featured point d’esprit lace gown embellished with a harness embroidered with hand-stitched white leather petals, flowers and butterflies, clear plastic flowers and turquoise beads. 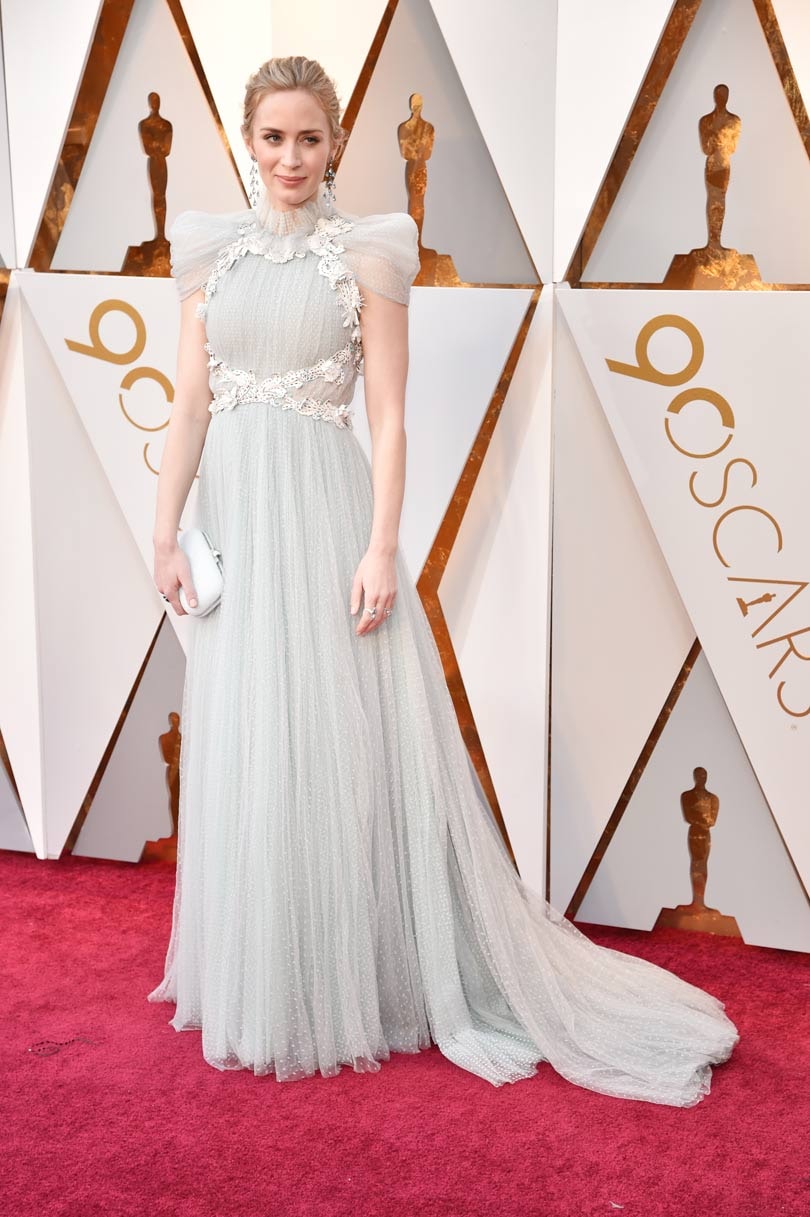 It wasn’t all custom gowns and straight-from-the-runway looks, one of the biggest talking points from the Oscars red carpet was the style of actress Rita Morenro, who won an Academy Award in 1962, she wore the same gown she accepted her Oscar in to prove that fashion never goes out of style. Originally made as a high halter neck, Morenro updated the look as a strapless silhouette, which was paired with a gold and black skirt with poppy red accents made from an obi belt used on traditional Japanese kimonos.