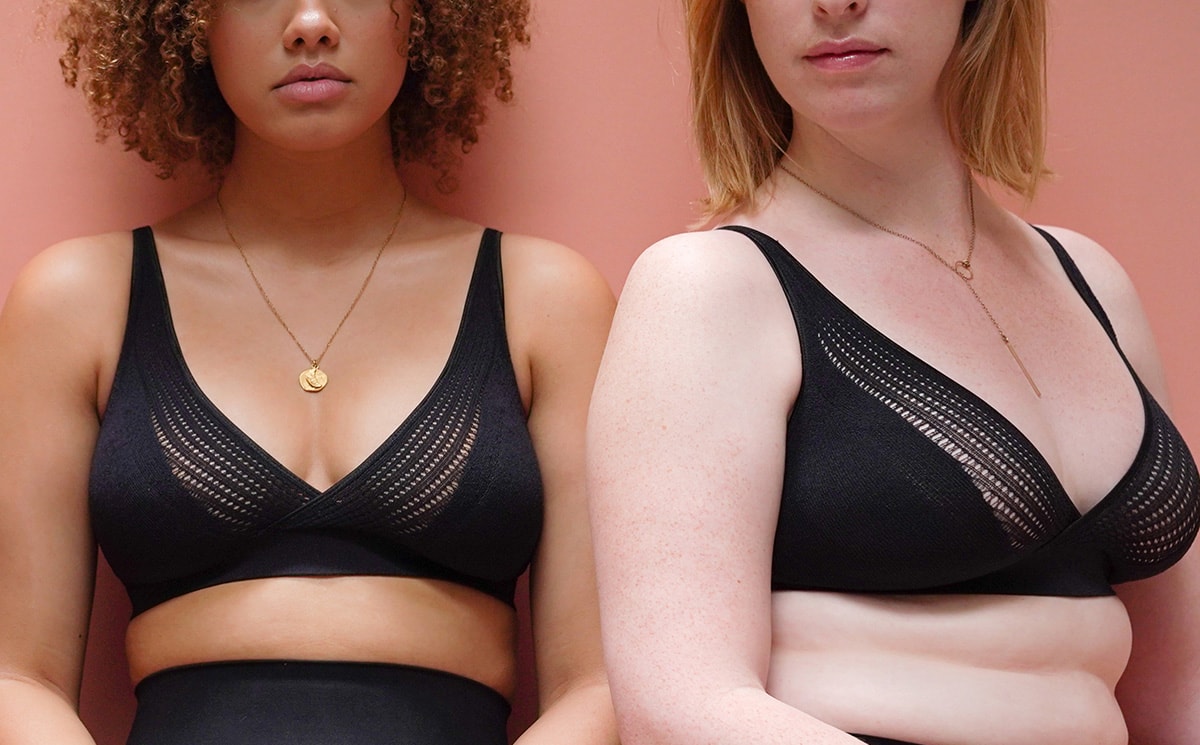 Support without the underwire: The knitted bra revolution from Soft Revolt

Many women will recognize it, the feeling of a pinched underwired bra. After a long day at work, a hot city walk or a far-flung flight, the first reflex is usually: off with that thing. Nowadays, more and more women, including many millennials, prefer bralettes over wired bras. But for women with cup D or higher, the soft bralette often offers insufficient support. For them, it can be a challenge to find the golden mean between comfort and support.

This may change. This past Monday, Elles Roeleveld and Anet van Haaster launched their lingerie brand Soft Revolt. In short: Soft Revolt offers a feminine, subtle bra for women with a fuller cup who don't want to wear underwire, but do need support. The bra is the result of a year and a half of intensive research into the wishes of women and the possibilities of computer-controlled knitting technology. Van Haaster: "With Soft Revolt we fulfill a great need for which there is now little supply.

Stories from the fitting room: from wires to bralettes

In the winter of 2019, Roeleveld traded a flourishing career in finance for lingerie. Roeleveld: "I wanted to work in lingerie from the age of thirteen. My mother worked in a lingerie store, my first salary went to lingerie. After high school I wanted to study technical textile science, but in the end I decided to go to university. I worked at ING for years, but after ten years it started gnawing. She left the financial world and went to work for Fabienne Zwanenburg, owner of the famous Amsterdam lingerie store Salon de Lingerie. Roeleveld: "Fabienne taught me the tricks of the trade. But I also wanted to know what happened in the fitting rooms of lingerie stores. What problems are there? What do women have to deal with?

Roeleveld noticed that there was a trend towards wireless bras. "Especially at home, or at the weekend. But at millennials I also noticed that underwired bras and sports bras were becoming more popular as everyday products". Van Haaster, who had been working in fashion consultancy for twenty years, also noticed this development. "The younger generation values comfort. They move a lot, play sports a lot, travel a lot. They like softness and natural shapes, they literally don't want to be in a straitjacket". Roeleveld: "There were several trends that pointed out: wireless is the way to go".

Roeleveld started her own lingerie line in the spring. “It had to be beautiful, suitable for fuller cup sizes, and durable. But it wasn't really innovative or sustainable at first, ”she says. "Something was missing in the concept." Van Haaster, who coached Roeleveld at the time in the development of her collection, thought so too. "Elles had made a nice collection, but I didn't think it was new enough." To get inspired, Roeleveld started looking at other industries, including the sportswear industry. “In terms of technical innovation, sportswear is hugely ahead of fashion,” explains Van Haaster. “Most of the innovation comes from brands like Nike. Think of those knitted sneakers, the Fly Knits. A mega success, preceded by years of research.”

The Fly Knits would become an important source of inspiration for Soft Revolt. "A friend of mine took me to a lecture by Lidewij Edelkoort," Roeleveld continues. "Afterwards, I got to talk to her, and when we talked about lingerie, she said: 'I don't understand why lingerie is still not knitted'. I immediately thought of those Fly Knits: knitted all in one piece, sturdy, they can withstand pressure, have a nice round fit. People run marathons on them. Wouldn't that be possible for a bra as well? Three days later, the ITMA (a big textile fair, ed.) would take place in Barcelona, that's where I flew to at the last minute. I saw all possible machines and materials. I became convinced that it could succeed. I called Anet and said: 'We are going to knit a bra'. Everyone laughed at me, but Anet said: 'Wow. This is really a good idea''.

A bra from the knitting machine

A bra is one of the most complicated garments to make: to obtain a good and supportive shape no less than forty to fifty parts are needed. A construction of tiny pattern pieces, straps, pieces of elastic, rings and hooks are attached to a solid base: the underwire bra.

Almost all existing bras are made of woven textile. This is striking, because woven fabrics give less than knitted material, such as jersey. Moreover, with the help of contemporary computer-controlled knitting machines, specific and complex shapes can be realized. By choosing the right yarn, this can be given sturdiness. This way you can build a strong, supportive bra without the need for bras. "Our bra comes out of the knitting machine almost entirely in one piece," explains Roeleveld. "Not only is that more efficient in terms of material use, but it also saves a lot of CO2 emissions: we don't have to fly in parts from all over the world.

Comfortable, efficient, durable - why doesn't the knitted bra exist yet? Van Haaster: "People have been making a sweater for hundreds of years: you make a sleeve longer or shorter, change a neck, but in the end it remains a sweater. This is different. Every step is new. That means that every step requires extensive research, and therefore a lot of time and money. Not an attractive perspective in a fashion world that revolves around speed and cost savings. Roeleveld doesn't always have an easy time of it either. "Just those yarns," she sighs. "We have tested about eighty yarns. And we haven't even mentioned machines, or stitches, or stitch tension." But, she continues, "we are doing this research because it really fulfills a need. That too is a difference between a sweater and a bra. A bra is something that you put on every day, that sits directly on your skin. It's a fundamental product, which makes it very fascinating.

A durable bra, for and by women

Soft Revolt is currently in the third phase of Climate-KIC, a European support program that offers coaching and funding to sustainable startups. In the start-up phase, Soft Revolt had to compete against 120 other companies. "We sat there, among the men from TU Delft with their innovative aircraft skins," chuckles Roeleveld. Soft Revolt ended up in the top four of the program. The only female member of the competition convinced the rest of the panel after Van Haaster and Roeleveld sent her a prototype of the bra. Van Haaster: "We had to pitch the bra during a Zoom call. When it was time for the jury verdict, she raised her hand first. She had put it on! And she said: 'Unfortunately it wasn't my size, because it's very comfortable. And for your information, she said to the other men on the panel, 'the first thing I usually do when I get home is take my bra off. Because there's a brace in there'. She reacted as an investor, but also as a consumer".

While participating in Climate-KIC, Van Haaster decided to stop her consultancy work in order to fully focus on Soft Revolt. Roeleveld: "We entered a new phase. The first phase was mainly technical, the second more consumer-oriented. That's what Anet is good at. We held five, six focus groups with women, selected by age and cup size, and talked to them about their needs. We built a website and put the social media in order. The reactions we get bring us the most pleasure.

"We have our own target group in mind, but all kinds of niche target groups surface," Van Haaster notes. "Everyone has a different reason for not wanting that brace. Roeleveld: "We get reactions from women who have breast cancer and are looking for a soft bra, people who work in disability care who now have to hoist their clients in tight sports bras every day, but also ex-corona-patients, who have difficulty breathing and for whom a bra with braces is too stiff. They are and will remain niches, but it is very valuable to hear a new perspective every time".

A 'Soft Launch' for Soft Revolt

On Monday, August 31st, the brand's 'Soft Launch' will be held: the first bras will go on presale via crowdfunding platform CrowdAboutNow. The proceeds will be used to start production. In the presale the bras will cost 55 euros, the final retail price will be 79 euros. The bras, made of responsibly produced polyamide and cradle-to-cradle certified elastane, will be available in six different sizes - for cup C and larger - and for the time being only in black. In the longer term, more sizes, colors and models should become available, but only if there is a demonstrable demand for them. Van Haaster: "We make products that people need, not for the showroom. On the occasion of the launch they did design a festive Soft Revolt-kimono. "We've had a lot of discussions about that kimono, after so much research it's very difficult for us to make 'just anything'. Sometimes we're a little too deep into it," Roeleveld laughs. "It can also just be fun at times."

For the time being, the bras are only sold online. Roeleveld and Van Haaster hope to be able to organize their own fittings soon. "Maybe we'll rent some hotel rooms someday, or we'll take a van through the country," Van Haaster muses. Roeleveld's dreams already reach beyond the horizon. "I still have so many ideas. In Israel, a bra was recently developed that can detect the first signs of breast cancer. That's very technical, but also enormously inspiring".