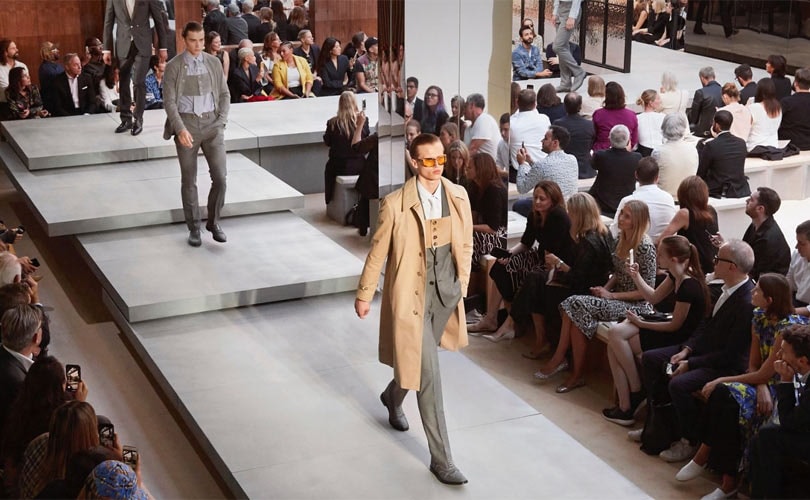 Tisci's Burberry has something for everyone, but will it work?

The Burberry SS19 catwalk presentation was both epic in proportion - 133 looks! - and epic in transformation. Held at a cavernous former Royal Mail warehouse in Vauxhall, guests were kept in the dark until the roof retracted and in flooded the English Indian summer rays of light. A more apt start to a new fashion era for the British luxury brand couldn’t have been asked for.

What is clear, Riccardo Tisci means to dress everyone: young, old, sophisticates, club kids, punks, and anyone in between. It was a broad gesture both bold and preposterous, but so much of current day’s fashion propositions are. The show was split into three parts to embrace the all encompassing; starting with tailoring, then streetwear, and closing with evening wear.

The trench and house check remain the codes of the house

The first looks were the amongst the strongest. The reworking of the iconic trench felt fresh, this time sans floppy-haired Bloomsbury type inspiration. So much of what has come to describe Burberry - the English eccentric, the countryside chic - appears to be a thing of the past.

The deconstructed check into stripes were a winner

Tisci did well with deconstructing the check into stripes, which were dyed onto silk and cotton, as seen on a woman’s pussybow blouse and men’s terry shorts. The new Thomas Burberry logo designed by Peter Saville that was revealed early August made several outings, both as a blouse, or the silk lining of a wool blazer with juxtaposed print. These were commercial items, the checks, stripes and logo will sell, as witnessed with the company’s strategy to drop ship throughout the season. 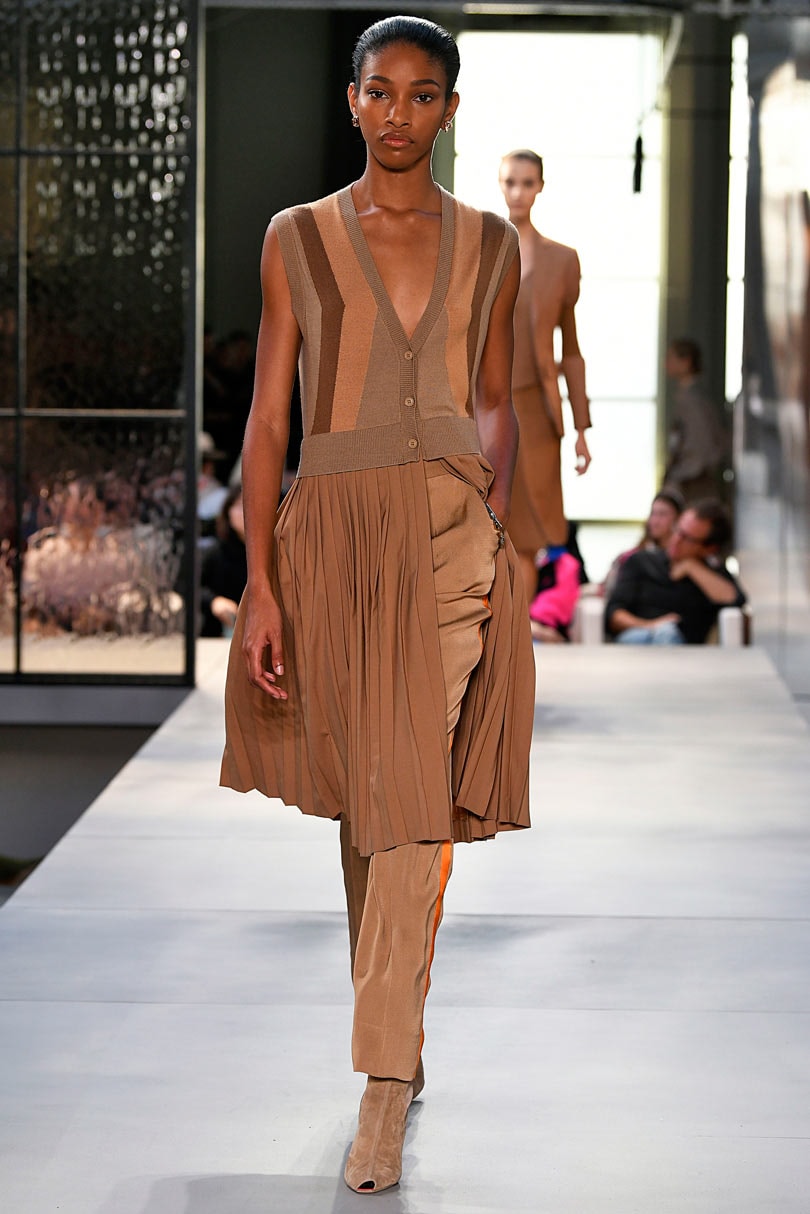 Burberry owns beige, though in the past it was perhaps the colour associated with its trench coats. But now it felt as a palette it could take ownership of. It was a win for Tisci, who's beige was both modern and refined. It was seen predominantly in daywear and outerwear, like a fluid knife-pleated dress worn over a slim pant with an orange tuxedo contrast. In menswear a luxe single-breasted coat and Harrington jacket stood out.

Tailored silhouettes were neat, oversizing was left to streetwear

There was suiting for both sexes, but here too the silhouettes were refined: slim trousers and blazers neatly cut. There was, thankfully, no trace of the oversized menswear blazer or exaggerated shoulder that has been paraded to death.

Too many options muddied the second half

The collection got into complex waters in its second act, which was focused on streetwear. Here there were too many options, ideas and random looks, which a tighter show edit could have avoided. There were photo prints and quotes on t-shirts - one odd look had the word cow emblazoned on a black tee teamed with a calf print skirt, accessorised with bondage (or bungy jumping) straps. Men’s trousers were straight and long, perhaps not so flattering for the sophisticated customer it aimed to attract in the first part of the show. These looks acted as a reminder of Tisci’s life as a twenty-something student on the London scene. Capes, buckles and clunky Mary Jane shoes were the dominant accessories, though none of them stood out as must-haves.

The end of the show saw Tisci introduce a new evening wear category, something the Burberry of yore was less focused on. A series of black column dresses closed the presentation, which Tisci explained to the New York Times that Burberry wasn’t just about one identity, but rather could propose multitudes; for mothers and daughters, fathers and sons.

Can fashion be all things to all people?

And herein lies the problem. Being all things to all people does not a fashion brand make. While it is easy to critique a humdrum of a look, and most designers have a least one catwalk look that is up for that debate, it is far more challenging to be the go-to outfitter for a demographic that includes all of mankind. There isn’t a single brand where the club kids, the gentry, the young and old, the sophisticates, the skater girls, the outsiders and business folks all come to shop. Not even Uniqlo can claim that moniker with its Lifewear.

Tisci knows a thing or two about streetwear, and at Givenchy he brought an admirable direction that saw the brand embrace a darkly sensuous, gothic luxury, bringing the company kudos and profits from near bankruptcy in 2005. So too there is that customer that will follow him to Burberry.

The heritage and draw of Burberry the brand extends far beyond the check and far beyond the trench, but Tisci will have to pick his battles. So far he debuted a modern day, multi layered fashion proposition, let’s see which direction it takes.