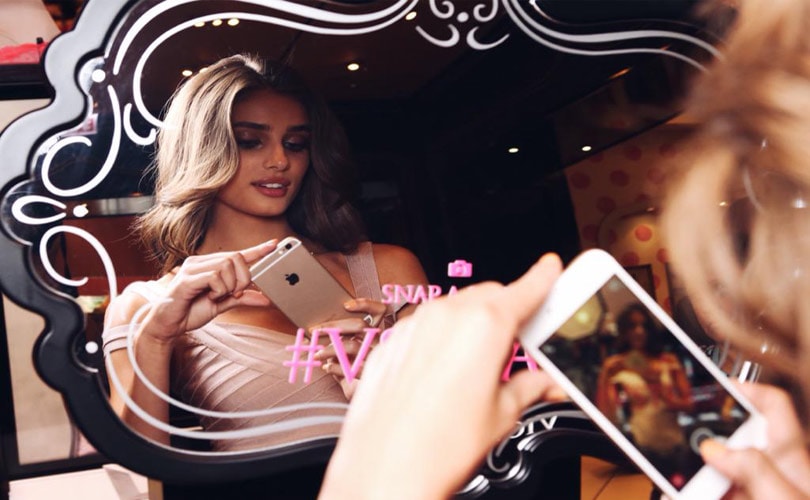 Victoria's Secret puts Selfies in the spotlight with new campaign

London - Lingerie giant Use this code: Victoria's Secret has launched a new campaign which brings together two of their target audience main interests: selfies and discounts through a channel they are well versed in: social media.

The new marketing campaign, developed to help promote Victoria's Secret new fragrance line named 'Tease,' invites customers to take a selfie in front of an in-store display featuring a mirror with the hashtag #VSTEASE, share it on Instagram with the hashtag #VSGIFT and present the image to a sales associate in exchange for a free gift. The global campaign, which was officially launched in Victoria's Secret stores across the globe last week was devised to help drive traffic to its stores, whilst encouraging user-generated content.

On Instagram alone the hashtag #VSTEASE counts 8,246 posts at the point of publication, with one post that was regrammed by Victoria's Secret official account receiving over 225,000 likes.

Morning, Angels! First 10 to share their #VSTease selfie in stores get a FREE rollerball. #regram @danielleprescod

Although Victoria's Secret is no stranger to give-aways, using selfies as a mobile strategy taps directly into millennials interests. "In-store selfies tied to social media are a great way for retailers to drive traffic to their stores and engage shoppers,' said Ken Morris, principal at Boston Retail Partners to Mobile Commerce Daily. "Selfies have become a hot trend among the younger generations and they present opportunities for retailers to leverage this fascination to connect with their customers in an entertaining way. Social shopping, with likes and dislikes, is becoming prevalent among millennials and it is likely to extend to other demographics."