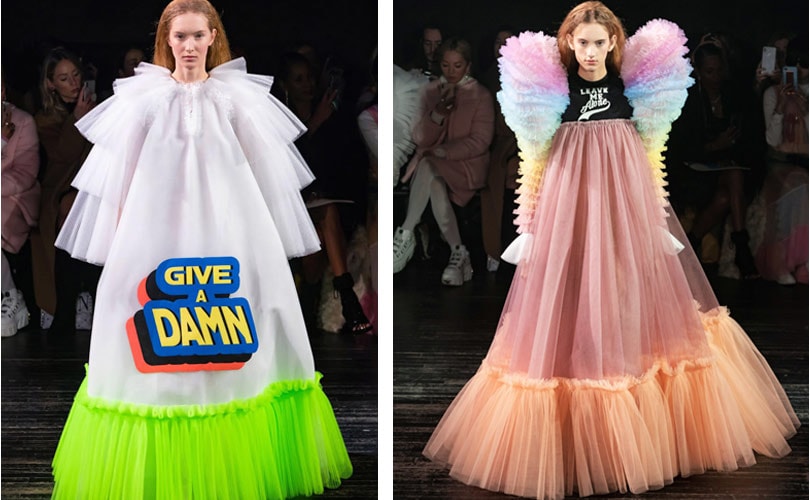 When fashion made feminism cool, did it steal its power?

Do we need to read Chimamanda Ngozi Adichie’s essay “We Should All Be Feminists”? If we’re wearing those words on a T-shirt from the Paris runways, doesn’t that automatically communicate, along with our unquestionable sense of style, our awareness of her writings? And if we don’t have 700 dollars to spend on that Dior T, we can find any number of fast-fashion versions at H&M or Forever 21, and even grab a pair of cheap sparkly earrings with the word Feminist dangling from chains just to maximize the statement in an ironic post-millennial way. We dry our dishes with tea towels which ask our dinner guests, “I’m a girl, what’s your superpower?” and further express our allegiance to womenkind by brunching in a “Notorious RBG” sweatshirt, a double helping of cross cultural references there, marrying a deceased gangster rapper with Supreme Court Justice, Ruth Bader Ginsburg. Clever, huh? Then we post a selfie of ourselves carrying our favorite “The Future Is Female” tote to the farmers’ market before being blown away by pictures on our Instagram feed of this week’s Viktor & Rolf haute couture show which presented the most meme-worthy frothy tulle dresses, as big as any Disney princess might wear, emblazoned with girl-power phrases from “Get Mean” to “I’m Not Shy, I Just Don’t Like You.” 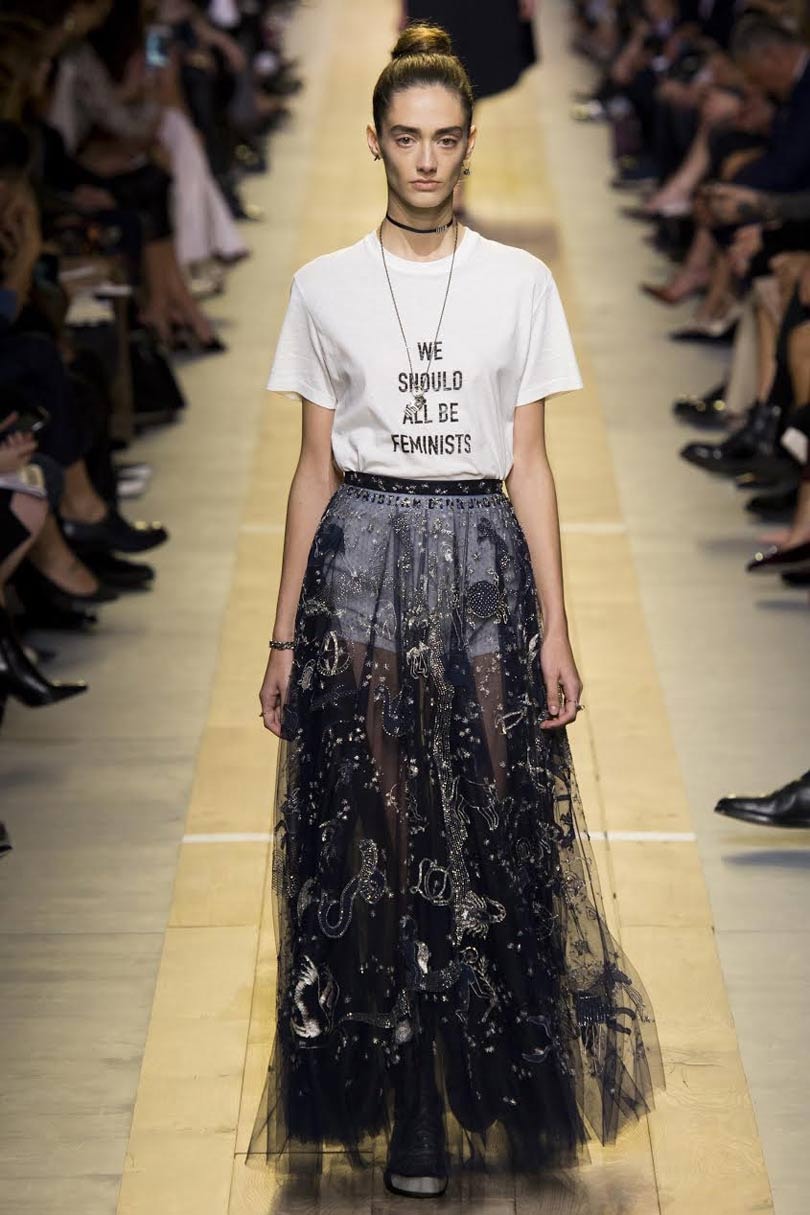 We’ve perhaps heard of rainbow capitalism or rainbow-washing, particularly around June’s annual Pride celebrations, which is when corporations co-opt symbols and slogans from the LGBTQ+ community and pop them on T-shirts without having ever offered any tangible assistance to the community; or greenwashing when brands cloak themselves in eco-friendly terminology without ever having done much to help the environment, now we have femwashing. We are adrift in a sea of sisterhood swag, mad-for-the-matriarchy merchandise.

Feminism as a trend

Remember when the tag “Feminist” wreaked too much of angry, man-hating harridans with under-arm hair for many women to want anything to do with it? Now feminism is beautiful and glamorous and expensive. Or it’s cool and sassy and star-spangled. Everyone wants in on the action, but is that a good thing?

Of the CEOs who lead the companies that make up the 2018 Fortune 500 list, just 24 are women, which is down from 2017’s number of 32 female CEOs. And according to recent reports by the Wall Street Journal, women are still paid lower than their male counterparts and boards are bereft of female members. In the fashion and luxury apparel industry a spate of recent hires suggest there is an attempt to redress the balance, with females assuming executive positions at Kohls, Reebok, Nike, and Bergdorf Goodman.

Wearing feminist merchandise helps give us a feeling of belonging, it’s a sartorial nod to other crusaders-as-consumers. We’re also currently reclaiming words like “whore” and “slut,” tossing them into our feminist sloganry, while drowning in epithets like “heroine” and “warrior” from Hollywood movies and the beauty industry. Who’s taking back their power now, patriarchy? But what if all it does is make us feel smug, lead to complacency, make us no longer woke but half-asleep? With the cheap banality and abundance of feminist swag we might be fooled into thinking that, as there appears to be so many of us, we’ve got this. 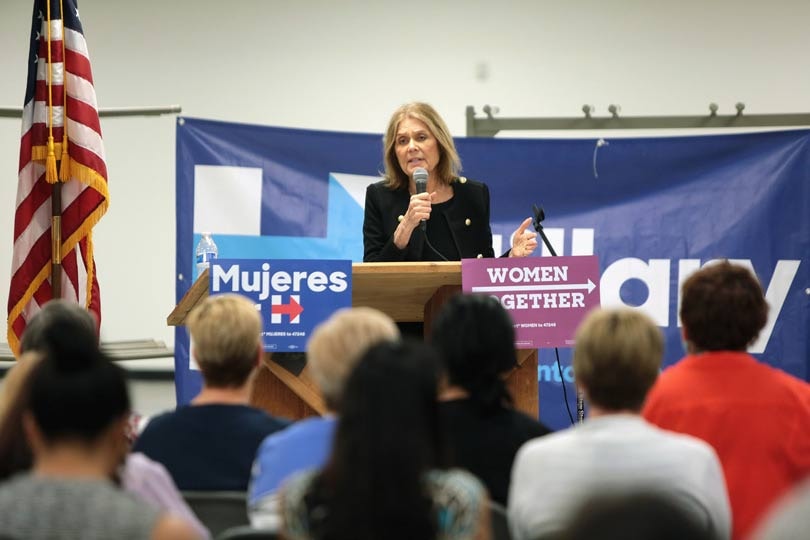 But the question is, are we using our voices to demand our rights––loudly, publicly, and often––or are we letting our T-shirts do the talking? Are we hoping that a pithy phrase emblazoned across our chests will suffice to prevent anyone from trampling on our rights so that we don’t have to deal with any uncomfortable confrontations? Are our words just another example of our so-called millennial entitlement?: I consume therefore I am. Gloria Steinem didn’t earn the Presidential Medal of Freedom just for showing up wearing slogans for the past five decades.

Femwashing is a marketing ploy

Exploitation for profit is not allyship. Corporate powerhouses throwing their marketing weight behind a movement that’s attached to the zeitgeist is nothing new, or particularly surprising, but it can still mean that only the elite 1 percent benefit. Wearing the fem-merch expresses passive allegiance, but activism comes from actively participating in the fight to make change happen. Some might argue when they read wage-gap statistics and reports of glass ceiling obstacles that we need to return to feeling the anger of previous generations, and stop getting distracted by cute T-shirts because, despite progress such as November’s record number of females elected to the House of Representatives, change is not happening fast enough, and might not last. 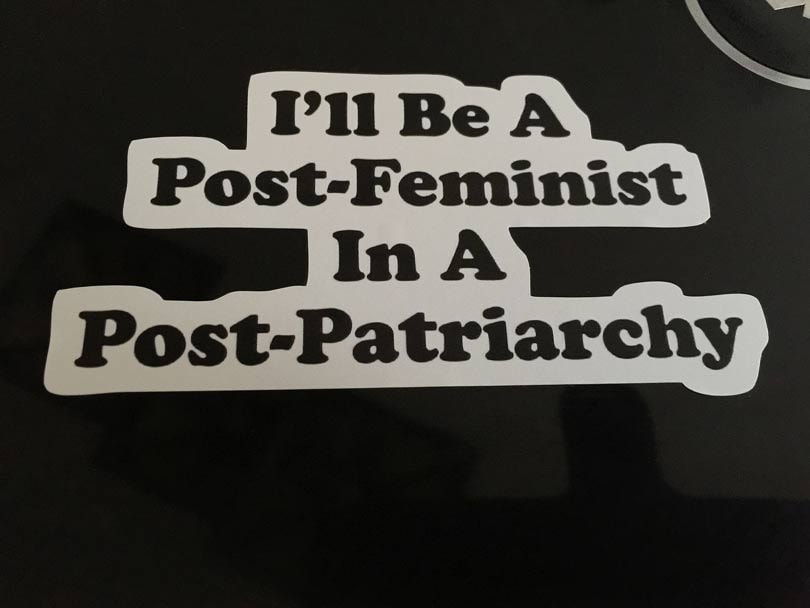 What’s next for fashionable feminists?

However we don’t need to give up wearing our feminism on our sleeve. We could just ask ourselves before we hand our money over to H&M, Forever 21, or any other giant global retailer, if it is really helping? Fast fashion has had an awkward history at best regarding the rights of its garment workers who are predominantly women, tyrannized, underpaid, living in communities in which the drinking water is polluted by industrial dyeing and fabric treating. An alternative might be purchasing from non-profit clothing companies which place women’s rights front and center of their mission statements, which can help advance discussion, fund equality measures, all while fueling our desire for cute merch. Or we could donate instead to women’s centers in our neighborhood, favor retailers with female C-suite members, customize our own fem-merch from old closet staples, research female-run organic cotton farms, donate to female candidates already gearing up for 2020…

If our tote is telling the truth and the future is female, we must make it so. If we don’t care enough to investigate where our hoodie bearing the slogan “Smash The Patriarchy!” comes from, we may actually be reaffirming the status quo, and selling out our sisters.