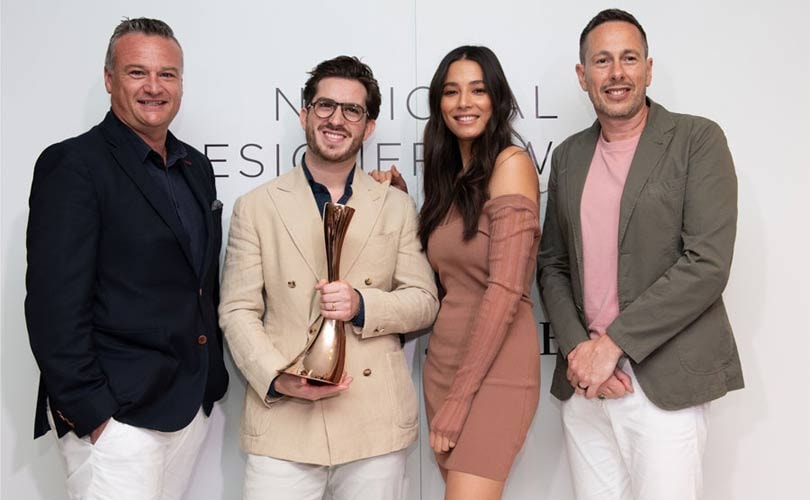 Australia has named British-born and raised menswear designer Christian Kimber as the winner of its 2019 National Designer Award, at the Virgin Australia Melbourne Fashion Festival (VAMFF).

The National Designer Award, now in its 23rd year is Australia’s most esteemed fashion award and celebrates and supports the future of Australian fashion by acknowledging designers in their first five years of business - “who excel in creative design, fashion innovation, manufacturing standards, business practices and innovation”.

Kimber, who moved to Melbourne with his Australian wife in 2011, was educated in the UK at the Queen Mary University of London and the London College of Fashion, and went onto intern at Savile Row tailor Norton and Sons, before working at custom shoemaker Lodger Footwear.

He started with men’s footwear before launch menswear apparel, with the goal of “redefining modern Australian menswear” the designer states on his website, while committing to the philosophy of a “slow-lifestyle”, by only working with independent, ethical and family-run manufacturers in Florence and Sofia.

The VAMFF National Designer Award has helped launched the careers of many Australian designers including Dion Lee, Toni Maticevski, Macgraw, and Romance Was Born, who have all achieved success in Australia as well as abroad, and Kimber, who has already been tapped by Lane Crawford in Hong Kong is definitely a designer to watch.

Graeme Lewsey, Virgin Australia Melbourne Fashion Festival chief executive, said in a statement: “The quantity of applicants this year was truly remarkable. Five out of our six finalists this year were menswear designers, which demonstrates the strength of our local talent and the growth of menswear as a category.

“Christian Kimber’s slow fashion approach to design, which enables him to create attainable luxury clothing, embraces modern Australian dressing. His potential to contribute to the growth of the Australian fashion industry both locally and internationally is unique and I am personally excited to see him excel further.”

Chris Wilson, David Jones general manager for menswear, mens footwear, accessories and childrenswear added: “Men are becoming more fashion conscious and experimenting with expressing their personal style so there is a constant demand for new and unique brands.

“Christian Kimber has established a foundation of high-quality, easy-to-wear, enduring pieces complemented by bolder statement pieces – the perfect mix for the modern gentleman’s wardrobe. We are committed to supporting the next generation of design talent and the National Designer Award is an initiative that has a great impact on a designers future.”

Alongside the main National Designer Award, this year’s competition also awarded the inaugural Honourable Mention for Sustainability to Arnsdorf, the only womenswear label in the competition founded by Jade Sarita Arnott, who wins a mentorship with the sustainability team at David Jones.

Commenting on Arnsdorf winning, Lucy King, head of sustainibility at David Jones said: “Through Arnsdorf’s local and vertical production process, high ethical standards, and use of responsibly sourced materials, Jade is taking a leadership role and setting new standards for incorporating sustainability into fashion and business.”