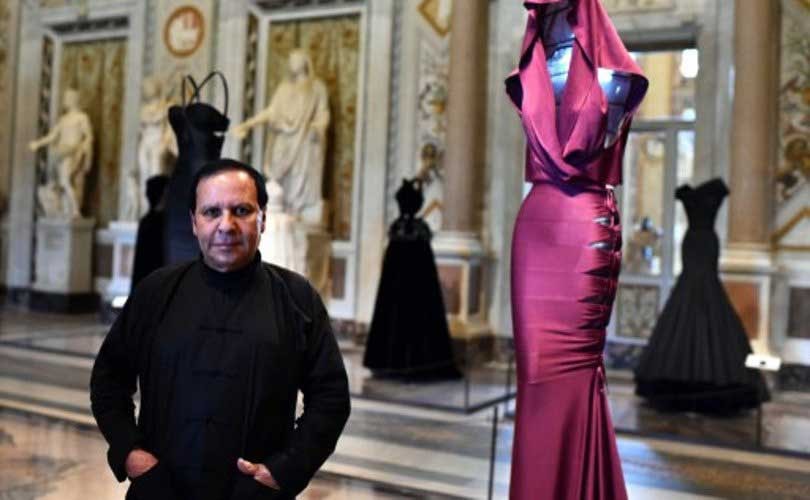 Tunisian-born Paris-based designer and couturier Azzedine Alaïa died on Saturday aged 77. The cause of death was confirmed as heart failure.

Known as 'the designer's designer," the diminutive Alaïa was a well respected pillar of the fashion community, and tributes to his talent came from far and wide, including designers Comme des Garcons founder Rei Kawakubo, Donatella Versace, Rick Owns, Jean Paul Gaultier and Stefano Pilati.

Alaïa was planning to open his first London flagship in 2018

While the New York Times published the designer's age as 82, Alaïa showed no signals of slowing down, with parent company Richemont planning to open his first London flagship store on Bond Street in early 2018.

Johann Rupert, chairman of Compagnie Financière Richemont, told WWD Alaïa was “not only a colleague but a great friend, so it was with shock and enormous sadness that I heard of his untimely passing. The industry has lost an exceptional talent. He was a man of integrity and kindness who was also a true creative genius. With his unique approach to couture, he created a distinctive style that will forever set his creations apart. Azzedine will be missed by all of us who had the good fortune to work with him.”

Richemont so far declined to comment on the future of the house and if it's plans to open the 6,000sq ft London boutique will go ahead.

Alaïa, who in July had returned to the official Paris couture calendar, was often referred to as the King of Cling. His sculptural dresses moulded the female form, his meticulous methods meant he famously cut, sewed and pined each piece directly to his models himself - emphasising construction to ensure every creation had the perfect fit.

Early in his career, Alana began assisting a dress-maker, moving to Paris in 1957. He soon got a job at Christian Dior, in the midst of the Algerian war, but was dismissed for having incorrect immigration papers. He then went on to work for Guy Laroche and Thierry Mugler until he opened his first atelier in the late 1970s. His first ready-to-wear collection under his own name debuted in 1980.

Alaïa famously ignored the fashion calendar, opting to show when his collections were ready. Up until his death, he retained his uncompromising attitude to exhibit his designs to his own schedule and was uninterested in the publicity of fashion weeks.

During an interview with The Ground Social & Magazine, Alaïa famously dissed Anna Wintour and Karl Lagerfeld. Of Chanel creative director Lagerfeld he stated: "I don't like his fashion, his spirit, his attitude. It's too much caricature. Karl Lagerfeld never touched a pair of scissors in his life." About the Vogue editor-in-chief he said: "She runs the business very well, but not the fashion part."

Alaïa's clients included the illustrious who's who of the creative industries, including Naomi Campbell, Lady Gaga, actress Greta Garbo and Michelle Obama.

British Vogue editor in chief Edward Enninful wrote a heartfelt tribute on his Instagram, calling Alaïa “a true visionary, and a remarkable man.” Designer Marc Jacobs said: "A true artist, genius and master. He was always kind, friendly and supportive of me. He welcomed me when I first came to Paris. We had some great adventures and many good times. His talent is unparalleled and his playful character generous, naughty and wickedly unique. The exceptional beauty he created is timeless and will without question- live forever! I pray that Azzedine will rest in peace."

Lady Gaga wrote: “I’d watch in awe as he hand-made each and every piece, his fingers touching the fabric like poetry. Then he would want to feed us all, and cook with his own hands and talk for hours at the table while his dogs would run around joyfully smelling the delicious food he made us,” she wrote. “There was no one who did what he did. No one knew a woman’s body like him. He should be celebrated as one of the greatest fashion designers the world has ever known.”