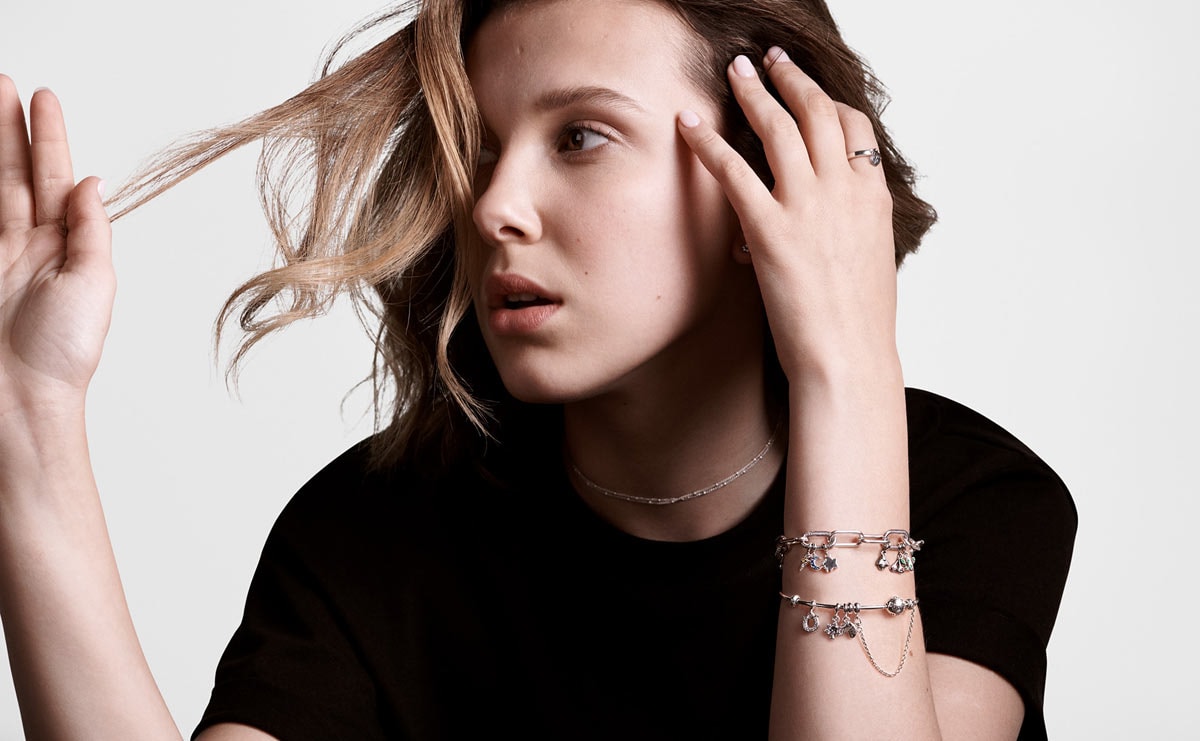 Pandora, which is now the biggest jewellery brand in the world, has signed a two-year contract with Stranger Things actress Millie Bobby Brown, who will become an ambassador for Pandora from October 2019.

The two-time Emmy nominee and Unicef’s youngest-ever Goodwill Ambassador will be the face of Pandora’s innovative and new jewellery collection, which the brand states will celebrate self-expression.

The campaign, lensed by fashion photographer Cass Bird, features casual and cool images of Brown shot in her adopted hometown of Atlanta, Georgia, and sees the young actress wearing her personally curated edit of jewellery from the new collection, including silver charm bracelets, layered necklaces and a ring. The collection will be revealed at a later date, with the full campaign launching digitally in October.

Acknowledging Brown’s impact on modern pop culture, Pandora’s chief creative and brand officer, Stephen Fairchild said in a statement: “Millie Bobby Brown is the perfect ambassador for the next generation of Pandora jewellery that empowers young women to express themselves.

“Not only an accomplished actor and making her presence as a voice of her generation known, she also brings a youthful and individual approach to jewellery that perfectly complements Pandora’s vision and creativity.”

The “self-expression” collection will launch later this year and marks the first official global campaign from Pandora, as part of the global relaunch of its jewellery brand, which will include a global roll-out of new store designs, new online platforms, as well as global partnerships and new products as it looks to renew its entire customer experience to drive a “higher brand relevance”.

Pandora will unveil its new rebrand at an event in Los Angeles on August 28, where it states it will share its new “company purpose, brand expression and visual identity,” ahead of the company’s largest marketing investment to date which will include design collaborations with global franchises, and partnerships with celebrities, influencers and organisations kicking off from the second half of 2019 and continuing to roll out into 2020.

The move is part of Pandora’s company-wide turnaround plan, ‘Programme Now,’ a two-year road-map designed to respond to current retail challenges and to support sustainable long-term growth, funded by a total annual cost reduction of 1.2 billion Danish Krone by the end of 2020.

Founded in 1982 and headquartered in Copenhagen, Denmark, Pandora designs, manufactures and markets hand-finished and contemporary jewellery. Its jewellery is sold in more than 100 countries on six continents through more than 7,500 points of sale, including more than 2,700 concept stores. In 2018, Pandora’s total revenue was 22.8 billion Danish Krone, approximately 3.1 billion euros.