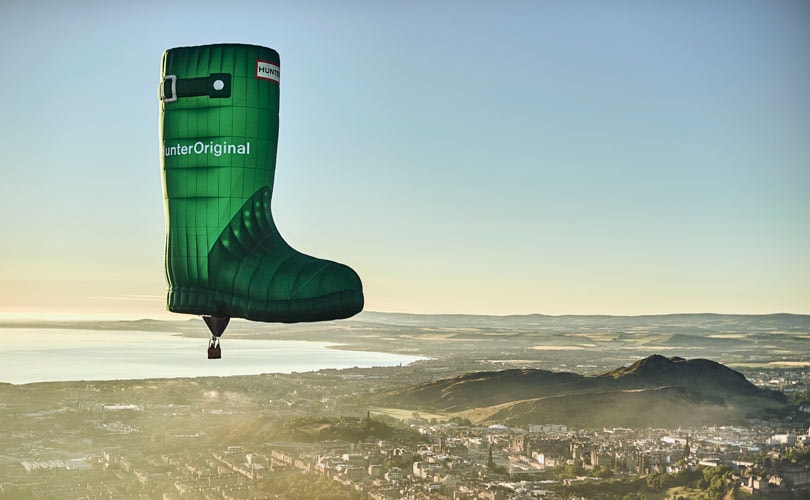 Wellington boot brand Hunter has announced that it has delivered record revenues in its full year to December 29, 2018, with an increase of 9 percent to 113.8 million pounds.

Strong growth came from Hunter’s largest market, the US, which increased by 13 percent year-on-year across all channels, added the brand, while sales in Asia Pacific also grew by 13 percent, and sales in Japan increased by 25 percent, which it stated “reflecting the continued benefit of Hunter taking direct control of its activities in the region in 2016”.

In addition, Hunter reported that sales outside key markets grew by 142 percent year-on-year, which it claimed is down to the increasing “global appeal” of the brand, which has also seen global brand search grow by 50 percent, fuelled in part by successful collaborations with Stella McCartney, Disney for Mary Poppins, Jimmy Choo, and Target.

These collaborations will continue into 2019 with a limited-edition collection of footwear and accessories for children featuring Peppa Pig, aimed at ages 2-5, which is launching in July 2019 in multiple territories including the UK and North America.

Hunter chief executive, Vincent Wauters, said in a statement: “2018 represented a landmark year for the business and the ongoing delivery of our strategic vision. We have shown continued growth across key markets and channels, with anchors in North America, Europe and Asia. Our global e-commerce is thriving, we have an established multichannel distribution platform and we have successfully diversified our product offering."

Overall, increased gross profit margin was up to 54.2 percent and adjusted EBITDA for the year was up 54 percent to 10.6 million pounds.

Hunter reports record revenues in 2019 of 113.8 million pounds up 9 percent

The fashion and lifestyle brand also credited its success on its ongoing strategy of category diversification, with strong sales growth reported across the bag and apparel categories, with full-price sales up 50 percent globally year-on-year, and the brand’s own e-commerce now accounts for 28 percent of total sales, delivering growth of 19 percent.

Wauters added: “The investments made in recent years to develop Hunter into a global lifestyle brand have enabled the company to generate sustainable global growth with strong operational leverage.

“As the results from 2018 demonstrate, with record revenues and increased profits in the context of a challenging retail environment, the brand is in outstanding health. We are excited with our progress and look forward to continuing to build the Hunter brand and business in 2019, the year in which we introduce strategic collaborations with brands as diverse as Stella McCartney and Peppa Pig. We are delivering against our long-term plan and vision to fulfil the brand’s very significant global potential.”

Hunter is built on its 160-year heritage of designing footwear and outerwear to protect from the weather and perform across all terrains. The British brand, founded in 1856 by American entrepreneur Henry Lee Norris holds two Royal Warrants of Appointment to HM The Queen and HRH The Duke of Edinburgh. Alasdhair Willis was appointed creative director in 2013 when two new brand categories, Hunter Original and Hunter Field, were introduced.