Poverty wages in Romania: What do fashion companies have to say?

Almost six weeks ago, the Clean Clothes Campaign (CCC) published its country report for Romania, which revealed that workers toil eight to ten hours a day plus forced, unpaid extra time, are subject to insults and harassment at the workplace and in the end, receive only 14 percent of a living wage. Sounds familiar? Yes, conditions at this Eastern European neighbour state seem no better than in far away Bangladesh.

Specifically, CCC named 14 fashion brands that produce in Romania and are part of textile alliances, nine of which are based in Germany. FashionUnited wanted to know their take on the matter and has asked Aldi, Basler, C&A, Esprit, Eugen Klein, Gerry Weber, H&M, Hucke, Hugo Boss, Marc Cain, Peter Hahn, Primark, René Lezard and ROFA for a statement. Below are their answers. 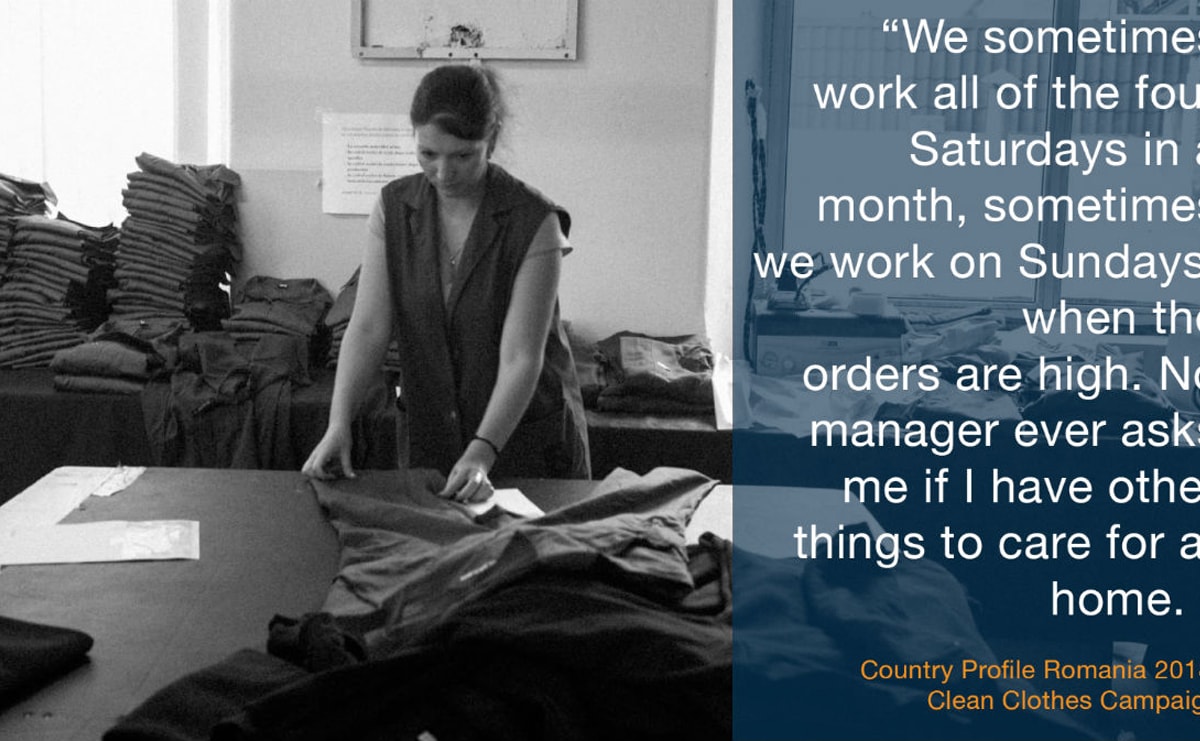 German discounter Aldi Süd confirmed that the company produced textiles in Romania until 2017, which were meant for the British market. Aldi distances itself from the working conditions mentioned in the CCC country profile and says in an email to FashionUnited: "The circumstances described in the report are, of course, in no way compatible with our understanding of socially just and humane working conditions. Aldi Süd procures its products from suppliers with whom we have been working trustfully for many years. Compliance with social standards is a given for the Aldi Süd Group and has long been an integral part of its corporate policy. Aldi Süd expressly opposes all forms of forced labour and other human rights violations.”

The discounter refers to internal corporate responsibility principles that are mandatory for all employees and business partners as well as Aldi’s manufacturing code of conduct coupled with national laws in supplier countries. “To ensure that the standards are met, we regularly carry out our own social audits at our production sites and check the results of third-party audits,” said the company, adding that certain corporate responsibility requirements are agreed upon with partner factories regarding their set up and management systems including structural and human resources.

“We review and evaluate annually whether the requirements are met satisfactorily. The results of the evaluation are taken into account when renewing a contract. In the future, we plan to further intensify cooperation with business partners who meet our CR requirements to a particularly high degree," concluded the company.

Apart from responses by Marc Cain and Hugo Boss, this was one of the most detailed and most positive statements of those 14 companies that FashionUnited approached; half of them decided not to answer, many simply referred to BSCI standards or refused to comment: "Please understand that we will not comment, as there is no indication that a supplier that produces for H&M is part of the report," said H&M, for example.

Peter Hahn and Basler confirmed that they are currently working with several suppliers that produce in Romania. "According to the corresponding BSCI audit reports, the companies pay at least the statutory minimum wage. Our suppliers also assure us that they pay the seamstresses a higher salary than the statutory minimum wage," said the companies in separate yet identically worded e-mails to FashionUnited.

None of the two companies - both part of Munich-based TriStyle Mode GmbH - mentioned their own independent monitoring on site but their reliance on “independent testing institutes as part of our amfori BSCI social standards activities [that] regularly audit our suppliers”. “Their reports are the basis for continuously improving processes together,” stated Peter Hahn and Basler and also referred to on-site and online training courses conducted by amfori BSCI and Peter Hahn.

Hugo Boss also confirmed production in Romania and referred to the names of its suppliers on the company's website - a fact that FashionUnited can affirm: Under the 'Partners' and 'Suppliers' section, 13 Romanian companies are mentioned that manufacture clothing, shoes or accessories for Hugo Boss, all employing less than 1,000 people.

“We have a long-standing and trusting liaison with all our partners. The Hugo Boss social standards are an essential element for that and compliance with them is an important aspect of the contractual arrangements with our partners. Our social standards are based on the core conventions of the International Labor Organization (ILO) and the Universal Declaration of Human Rights of the United Nations," said Hugo Boss in an e-mail to FashionUnited.

As far as wages are concerned, the company refers to various approaches when defining adequate remuneration, "usually not only the wage paid, but also additional benefits provided by the employer - such as insurance, transportation, food. (...) The only binding benchmark for the whole industry at the moment is the respective legal minimum wage", which Hugo Boss has anchored in its social standards for suppliers: "Wages must at least correspond to the respective statutory minimum wage or the appropriate value customary in the industry - whichever is higher"; likewise the payment must cover the basic needs of the employee. According to wage data surveys carried out by Hugo Boss, "the sum of remuneration benefits regularly exceeds the national minimum wages", which are, however, far below a living wage in Romania, as the CCC report disclosed.

Fashion brand Marc Cain, which joined the amfori BSCI initiative in April this year, responded most quickly and extensively to FashionUnited's enquiry, confirming production in Eastern Europe, as well as Western and Southern Europe, Asia and Germany. "Marc Cain maintains long-term and appreciative business relationships with the suppliers - with a majority of them having lasted more than ten years. Our buyers and traveling technicians are regularly on site at our production facilities," said the company via e-mail.

“Due to our high demands on workmanship and fit, we are dependent on highly qualified specialists. While other buyers have left Romania because of rising wage costs, Marc Cain has stayed, ensuring a continuous workload in the companies and thus securing jobs. (...) We would like to retain the employees and their expertise as specialists with us and this only succeeds with attractive wage conditions” said the company about the situation in Romania, adding that it has adjusted the remuneration seasonally and proportionally to the legal requirements. “At our partner companies in Romania, wages are above the respective industry standard,” stated Marc Cain.

Buyers feel stronger when they are united

Gerry Weber was also quick to respond to Fashion United's enquiry, but the company does not currently manufacture in Romania: "We currently do not purchase any goods from Romania. Until January 2018, we operated a center of excellence in Romania that employed specialists. We checked fair payment and working conditions regularly by our own expert staff and external, independent auditors".

The company also refers to its collaboration with the German Partnership for Sustainable Textiles since 2015 and its membership in amfori BSCI since 2010 as proof of how important paying living wages in the supply chain is for Gerry Weber, as well as the cooperation of all players in the industry: "The merger of many individual companies thus enables a great deal of leverage with which we can noticeably improve production conditions. This also guarantees compliance with local legislation and international labour standards, especially with regard to minimum wage payments".

Hugo Boss feels the same way and is convinced that "an individual company cannot achieve higher wages on its own. This is only possible within the framework of binding, sector-wide guidelines. As a member of the German Partnership for Sustainable Textiles, we will participate in the 'Living Wages' initiative that is currently being launched. We are confident that in cooperation with IndustriALL and its initiative ACT (Action, Collaboration, Transformation) the principle of negotiations between employers, employees and employee representatives on wages can be established on an international level and that the planned initiative will deliver generally valid and transferable results."

Conclusion: Those companies that rely on good relationships with their suppliers are working on it actively and can also be found on site. As commendable as joining initiatives such as amfori BSCI and national and international textile alliances is, it is not enough. According to the old adage 'trust is good, control is better', fashion companies should check very carefully where and with whom they manufacture their products and also invest money and effort to build long-term, sustainable relationships with suppliers that pay off for both sides.