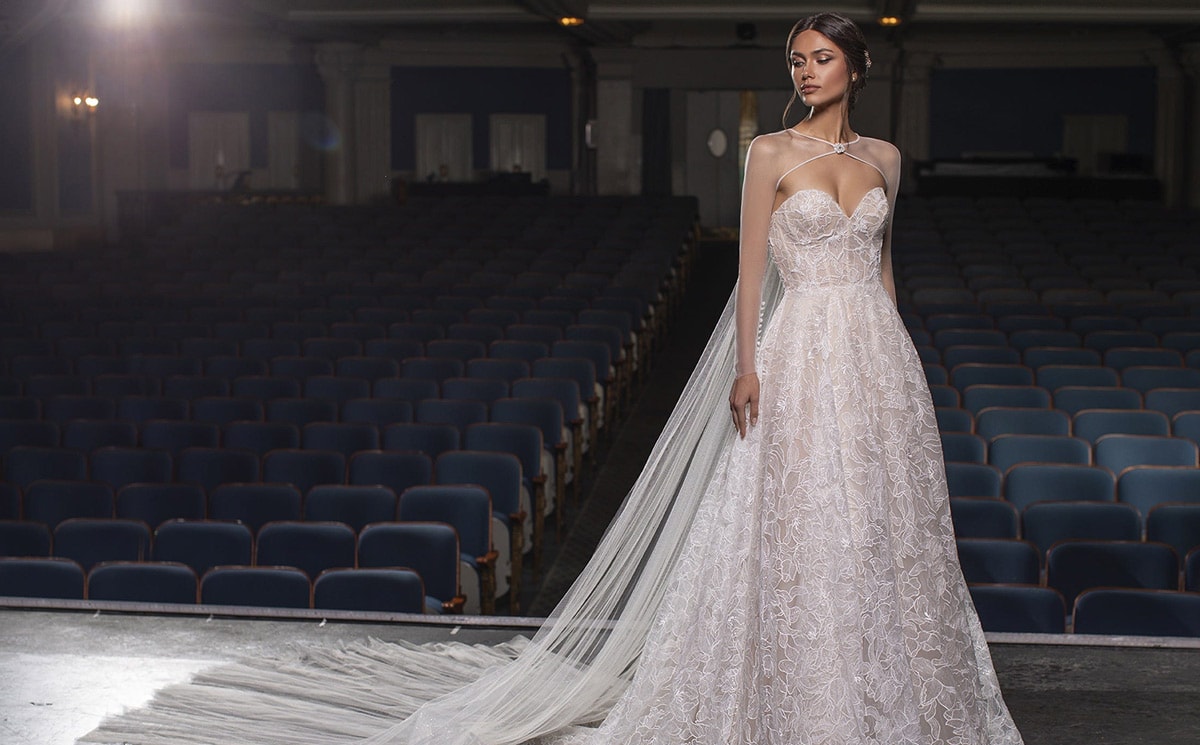 Pronovias CEO: 'Crisis or not, love is never cancelled'

If any segment of the fashion industry has been hit hard by the corona crisis then it is bridal fashion; or so you would think. "The bridal fashion industry is very resilient," says Amandine Ohayon, CEO of the Pronovias Group, during a telephone conversation with FashionUnited. "Of course, the situation is not ideal and 2020 is difficult, but 2021 will be the best year so far." The past period at the company has been dedicated to accelerating the transition of the European leader in luxury bridal fashion. The company entered the next phase of digitization, seizing the moment to further zoom in on sustainability and not losing sight of inclusiveness. Ohayon shares how the group is doing now and what the company still has in store.

For those who do not yet know the Pronovias Group: the originally Spanish company has several bridal fashion brands in its portfolio. There is Pronovias, perhaps the best known of the group, Nicole, White One, Saint Patrick and most recently added is Dutch brand Ladybird. In addition to bridal fashion, the company also sells occasional wear, but the latter only makes up twenty percent of the total portfolio. The group is historically a strong player in southern Europe, but wants to be the global leader in the field of luxury bridal fashion.

At the beginning of the year, when the corona crisis just broke out, the Pronovias Group also felt a shock wave, Ohayon says. The first instinct was to ensure that everyone was safe and healthy and then could work well from home. Then it rolled up its sleeves and went to work to make the most of this time. "It's a challenging time for everyone. We had to build new ways of working. What you see is the split in two mentalities. The first group are people who see the news and believe that this is the end of the world. The second group sees the news and looks for new and innovative ideas." The group chose the latter approach. Within four weeks, a digital showroom was launched, virtual appointments with brides took a flight and within eight weeks, four of the group's five websites were given a makeover. "Digitization was a good focal point at this time, because it was easy to realize from home," says the CEO. In the digital showroom, the group shares presentations of the dresses and videos of models with the dresses so that the movement of the garment can also be clearly seen. A live stream has even been set up for Chinese buyers because this is proving very popular in China, says Ohayon.

Not only the buyers went digital; the brides also sought digital contact with the group. Brides can make an appointment online to pick out a dress digitally. The purchase of the dress is then completed by making another physical appointment in the store where the dress will be fitted. "Because we always work by appointment and are not dependent on passers-by, we were able to switch quickly despite the measures taken". Not only because of the digital appointments, but also because of a focus on social media, the group went more digital than ever. "We've never had so much contact with our brides via social media," says the CEO proudly. "You have to stay close to the bride." The choice to focus on social media came pretty quickly. "Everyone experienced during the lockdown that they were much more online than usual. We responded by producing special content for the brides," says Ohayon. Think about webinars on autumn weddings, intimate weddings and customizing a dress. "Many brides have postponed their wedding, but may have already bought a dress that is suitable for a different season than what they are getting married in now. In a webinar we explained how to make a dress suitable for, for example, autumn."

Something that has surprised Ohayon in recent months is the fact that brides have bought more expensive dresses. The average purchase price per bride has increased, she says. "Something we had never thought of before." Brides already have to compromise when it comes to the date of the big day, the size of the big day, but according to Ohayon they absolutely don't want to compromise when it comes to the dress. "It even seems that they are going for an even more expensive and beautiful dress because they already have to skimp on so many aspects." 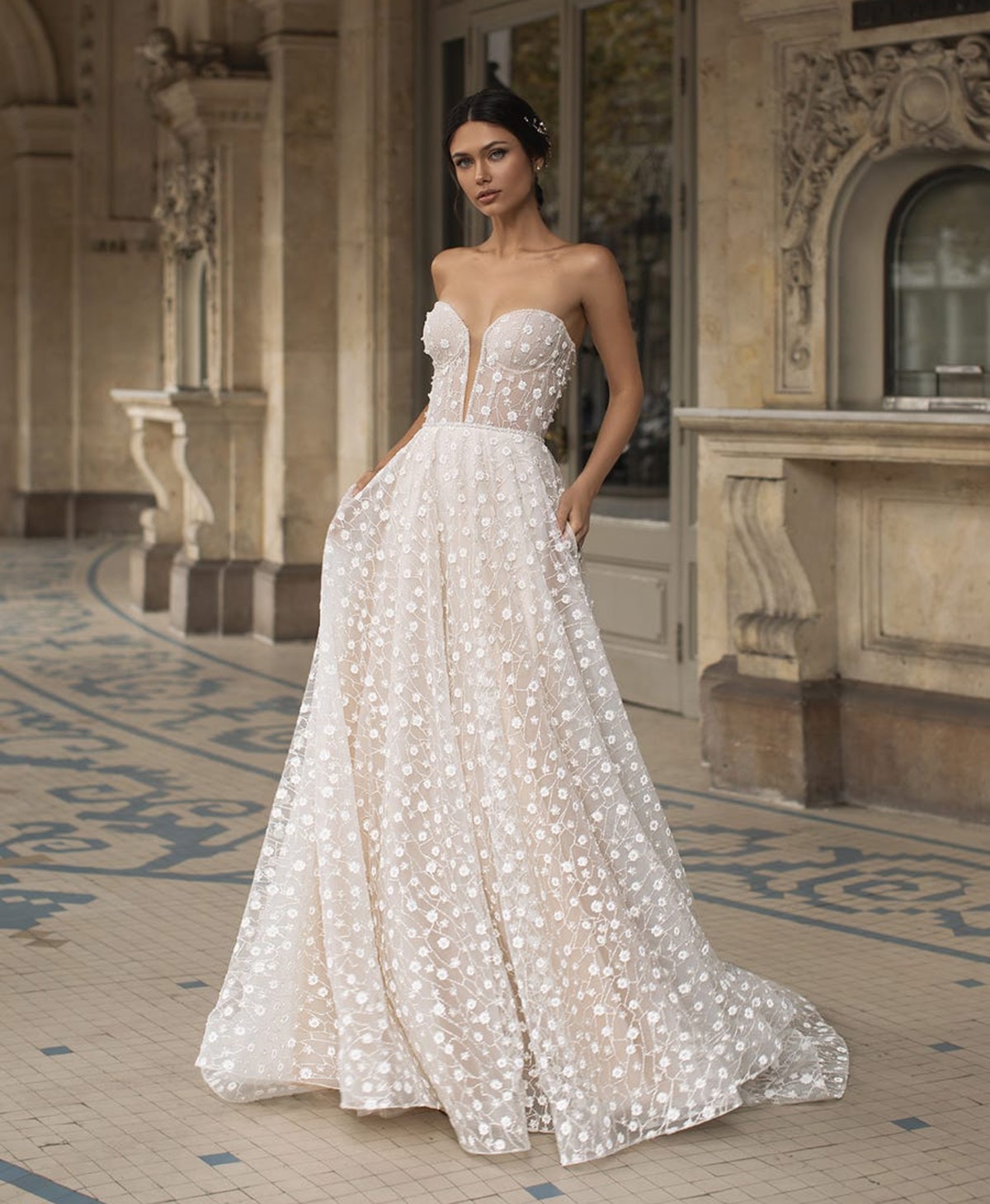 Pronovias CEO on sustainability, inclusiveness and the corona crisis

In spite of the challenging time in which the Pronovias Group also finds itself, the plans of the group have not changed. "Internationalization has not changed. The second part of the strategy, digitization, has gone to the next step because of the crisis". The third part of the group's strategy is to lead the industry to a more sustainable model and that too has been given extra time during the pandemic.

Internationalization has been high on the group's agenda for some time now. Among other things, the company bought the Nicole brand in 2018 and took over the Dutch company Ladybird in 2019. Historically, the Pronovias Group has a strong presence in Southern Europe, but in the meantime it has also focused on Northern Europe and even North America and China. The acquisition of Ladybird fits in with the group's strategy. "We are always open to acquisitions and at Ladybird we saw many complementary aspects. Ladybird has a strong presence in Northern Europe, an area where we were not yet the number one player. In addition, Ladybird is also a quality brand on an entry-to-luxury level," says Ohayon. A brand with such a positioning was not yet in the portfolio and therefore the company sees the acquisition as a good addition. The market share that the group gained through the acquisition of Ladybird also played a major role in the motivation. "We were perhaps the second or third largest bridal fashion player in Northern Europe, depending on the country and sometimes specifically the region. Because of the acquisition we are now number one there as well". The Pronovias Group plans to further roll out Ladybird internationally. The brand has already been rolled out to Italy, France, Spain and Portugal since the acquisition. Next year it will make the step to the United States and China. "There is an exciting time coming up for Ladybird."

For the rest, the focus for the time being is on China and the United States and Canada. This is where the originally Spanish group sees the most opportunities for growth. When asked about the Northern European markets, specifically the Netherlands and Germany, Ohayon says it has been positively surprised in recent months. "These markets are very resilient. In any case, sales did not experience the same dip as in other countries. The recovery has already started in these countries. We expect September to be an important month with brides shopping for their wedding dresses." 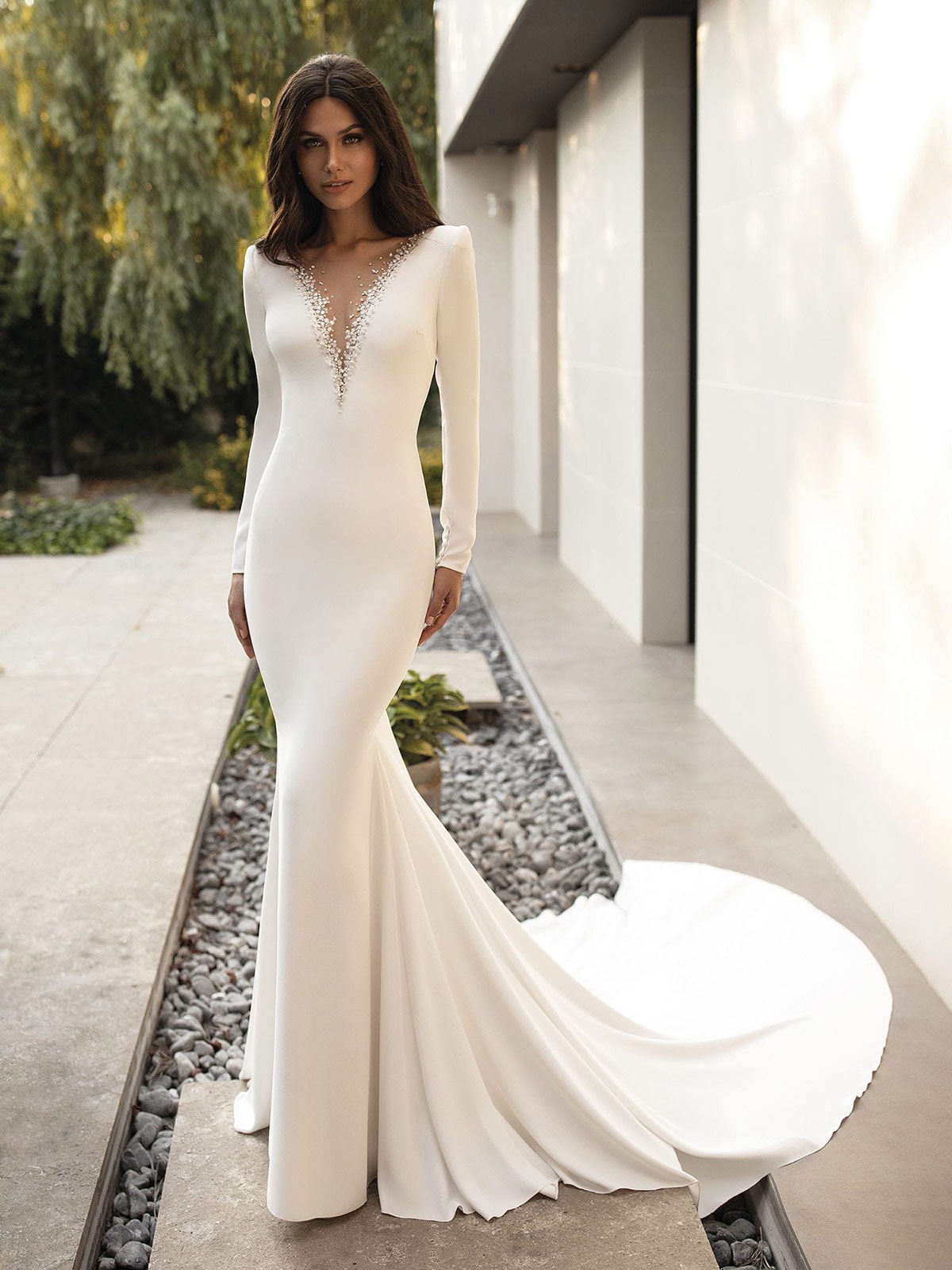 One focal point that Ohayon cares to emphasize is equality and inclusiveness. "I don't like to pigeonhole people. I've never understood why the term 'plus size' is necessary. Yes, patterns are different for one size than another, but everyone deserves to look good". The company has carried out extensive sizing for a long time now. "I want every woman to feel fantastic, a million bucks. Everyone should be able to get married in a dress they feel great in."

The company previously worked with Ashley Graham, model and body positivity activist. The result was a collection of 16 pieces. "I want to promote a positive body image. We also want to make sure that we can make every bride feel glamorous". Also, according to Ohayon, it doesn't matter what age a bride is. There's still a taboo on getting married at a higher age, but the CEO says that's not necessary at all. "Everyone deserves to feel fantastic, doesn't they?"

Sustainability is also a hot topic in the bridal group. But how do you sustain an industry that revolves around a dress that often only wears once? Ohayon admits it's a legitimate question. "First of all there is the sustainability of the production chain, the use of materials and later the reuse of the dresses". Coming September there will be a completely eco-friendly collection, not only at Pronovias but also at the other brands. Ohayon can't give much away yet, more information will be shared in September, but the CEO is clearly very enthusiastic about it.

The company has also been working with Brides do Good in the UK since last year. The Pronovias Group encourages brides who do not keep their dress after the big day to donate to charity. "By doing so, we give less fortunate people the chance to get a beautiful dress, but we also give women and girls the chance to get an education". Namely, one third of the proceeds of a dress goes to a partner of the charity who fights child marriages and actively works to improve the position of women and girls. The group is also working on designing wedding dresses that can be worn with an adjustment. All in all, the company is developing more and more ways to put sustainability first.

At the end of the conversation it is very clear that Ohayon looks positively to the future. 2020 may not be as the company imagined six months ago, but the CEO is convinced that the bridal fashion industry is resilient. "When one hears that weddings are allowed to happen again, everyone is so happy. Crisis or not, people fall in love and will get married. If you can live with someone during lockdown, you can also be married to them," jokes the CEO. "We live in difficult times but that's when we realize the importance of friends, family and people who are dear to them. A wedding is a great way to bring them together in an important and symbolic moment. In the end, love cannot be restrained." 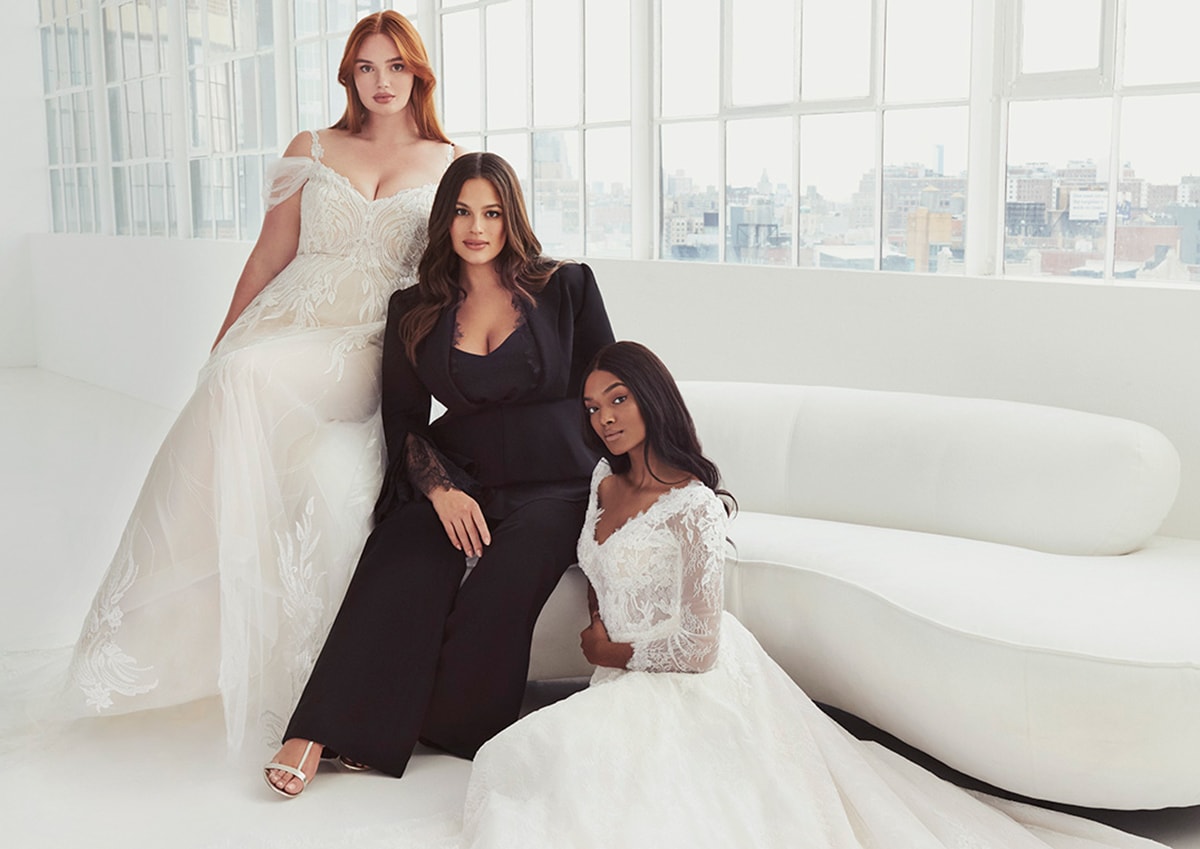