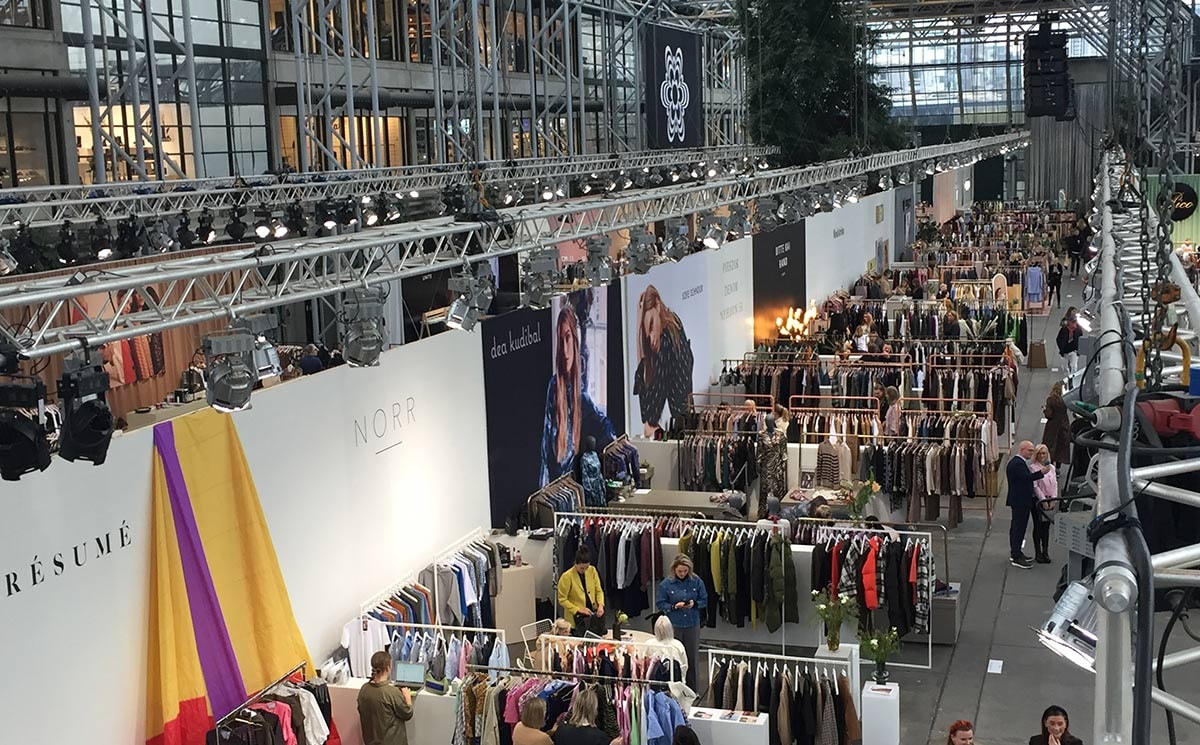 Copenhagen - For two weeks a year, Copenhagen is dominated with fashion. Last week, the Danish capital, which remains high on the list of fashionable cities in the eyes of the industry, was once again flooded with buyers, sales representatives, influencers and everything in between as a result of the concurrently running Copenhagen Fashion Week and fashion fairs Revolver, CIFF and CIFF Youth.

For those who have never visited the Copenhagen International Fashion Fair (CIFF) before, the event can be overwhelming as it is spread across several floors, halls and special areas; a physical map of the building plan is also not available following the decision by CIFF a few years ago to switch to the more sustainable option of only offering the plan online. In fact, the theme of sustainability was, perhaps unsurprisingly, a key focus among visitors and exhibitors at the fair. But that wasn’t the only talking point.

One week before CIFF took place, Danish trade association Dansk Mode & Textil announced that the turnover of the Danish textile industry fell compared with the previous year - the first time this has happened in ten years - reportedly due to a decrease in turnover of physical stores, but also diminishing exports which Denmark has relied on for years. Trade with Germany, its largest market, fell by 6.8 percent and trade with the UK and the Netherlands fell by 2.5 percent and 12.6 percent, respectively. Additionally, almost every fashion fair these days is dealing with the question ‘what’s next?’ - all these factors make a visit to CIFF in January an exciting and intriguing affair. 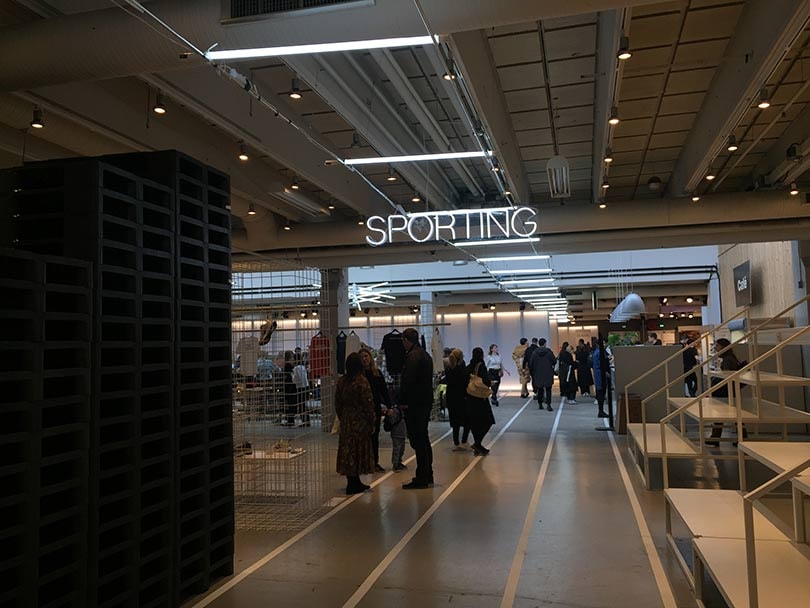 In January, CIFF expanded its exhibition space for the first time to include a sporting segment - as before, there was also the Stylesetters, Raven, Urban, Sporting, Future Classics and Lab segments, and an additional CIFF Youth Pavilion. After a “gentle start”, organisers of the event said the sportswear segment, which is one of the means by which CIFF intends to remain innovative, will be further expanded in the summer. “The original way of fashion fairs is dying. Furthermore, ‘fashion fair’ is not a sexy term,” organisers said during the press tour with international journalists.

It is clear in the fashion world that fashion and sport have long gone hand in hand, and in the sporting segment - and wider sportswear industry in general - the focus remains on one of its biggest tasks: making sportswear fashionable without losing its technical features. One such brand is Petra, founded by Italian model and engineer Pietro Boselli. The brand presents itself as a fashion label, making design and style a priority, but underneath that, durability and technical properties play a key role. A few steps further along the segment’s floor is the I.Toreheim stand by Irene Toreheim. Launched last autumn, the brand chose CIFF as the first trade fair where the company is represented. It currently has its own webshop and its yoga clothing collection is available in two brick-and-mortar stores. The owner and designer said that yoga clothes are often very colourful and show a lot of skin, but that this doesn't suit everyone. The brand is characterized by soft fabrics and articles that sit well and do not slip.

Multiple languages are heard across the fair’s floor: French, Italian, Swedish, English, Dutch. The exhibition organization indicates that CIFF used to be very focused on Scandinavia but now it's more important than ever to grow into an international platform. In the Raven segment, where a curated selection of menswear is showcased, this is most prominent. The segment itself is not new - it was founded four years ago - but it includes several trendy brands from abroad. According to the organization, the international aspect comes into its own at Raven.

Danish brand Woodbird in the urban segment is active in the Netherlands as well as in Sweden, Switzerland, Germany and recently also in Italy. Above all, it wants to concentrate on the international markets. With around 60 sales outlets in Denmark, the market is saturated in the brand’s opinion - it is well represented but still exclusive. “For example, we could have 100 points of sale in Denmark, but we are selective. We rely on long-term partnerships, not just one or two seasons,” the brand said. Woodbird has been at CIFF for about five years and has noticed the changes at the show. “It is up to you whether it will be a good fair or not. You have to work on it yourself and get people to your booth with your products.”

Dutch brand In Gold We Trust was also represented at CIFF for the first time this season. “Two trade fairs are relevant for us: Seek Berlin and CIFF,” it said. “Also a retailer we had been in contact with before, but it was difficult for him to get to our showroom. Now he happened to be here and wrote an order.” The brand indicated that retailers often have to meet a brand a few times, at a trade show or online, before placing an order. The presence at a trade fair is, so to speak, a careful first encounter. 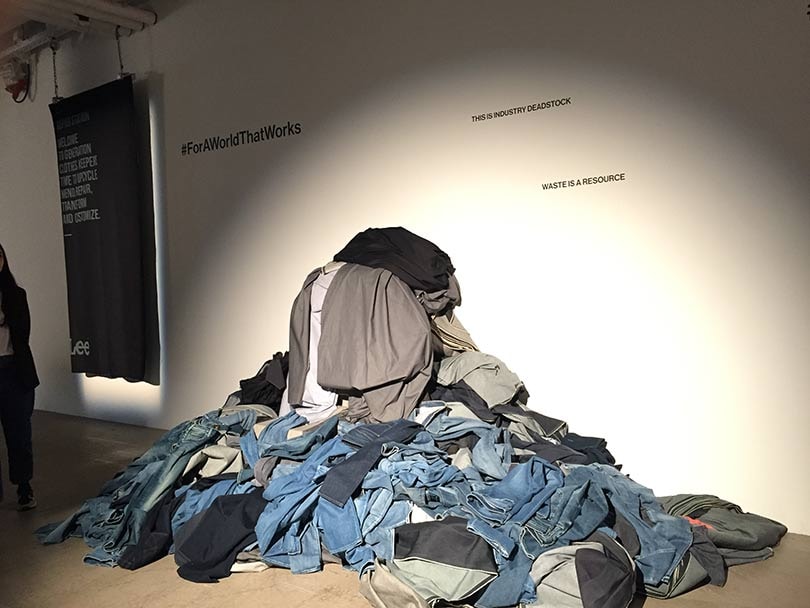 As every year, there was also a space dedicated to special projects, curated by Stavros Karelis. What was new was that the segment was accessible to the general public this time. The partner for this edition is the denim brand Lee. The installation is called ART (Alter - Repair - Transform) and it shows various initiatives that use old clothing or residual items and “adapt, repair or convert them”. The installation was set up in collaboration with Lee, primarily to talk to consumers. Across the room, there were also several piles of jeans and fabrics that visitors could turn into something new.

“If we continue to see garbage as something terrible and useless, we won't change anyone's mind,” said Orsola de Castro, founder of Fashion Revolution and advisor to the ART project. “We want to inspire everyone, for small or big changes. We should welcome experiments. It can be as small as repairing clothes to experimenting with Deadstock and within the CIFF.” The fashion designers Duran Lantink and Bethany Williams, who often work with deadstock, also presented an art installation that was shown during CIFF.