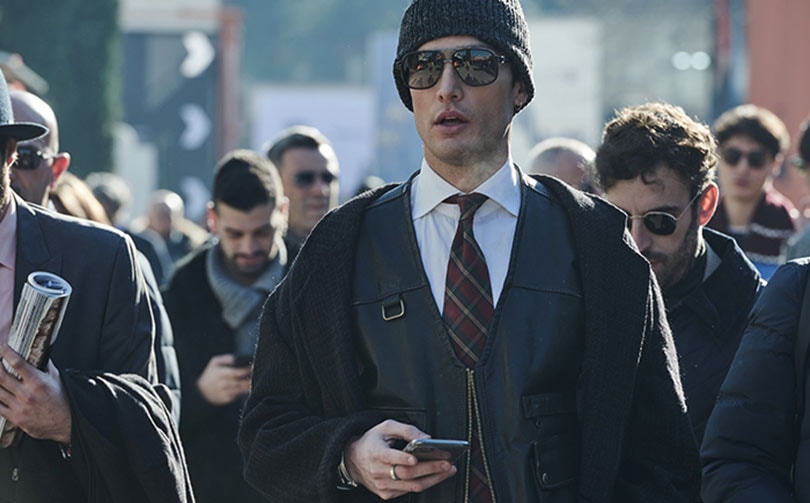 Florence - Leading menswear trade fair Pitti Uomo was back in Florence, Italy, last week, where inside the walls of the iconic Fortezza da Basso, fashion designers, brands, buyers and aficionados got together to showcase the latest trends, collections and innovations for coming menswear seasons.

Over 1,200 exhibitors and around 21,400 buyers, of which more than 8,300 were from abroad, attended the iconic trade fair, which ran from 7 to 10 January - that translates to a drop of around 10 percent in overall numbers compared to the January 2019 edition. CEO of Pitti Immagine Raffaello Napoleone said that was partly due to the fact the event ths year fell immediately after the Christmas vacation during the sales periods. Breaking the visitors down by country, the 20 most important markets of Pitti Uomo were Germany, Japan, the Netherlands, the UK, Spain, Turkey, France, Switzerland, Belgium, the US, Russia, Korea, China, Austria, Greece, Portugal, Sweden, Denmark, Canada, and China-Hong Kong.

Since its inaugural show in 1972, Pitti has been a hot spot for traditional men’s formal and tailored clothing - and it hasn’t lost that allure, with many of those brands naming Pitti as the most important, if not the only, trade fair they attended. Neapolitan shirt label Finamore was one of those brands. It recorded a good edition at Pitti, with Paolo, one of four brothers now running the company, saying it was mostly international customers visiting his stand - though noticeably fewer Italians than in past years. “We saw a real mix of new customers and returning ones, a lot from Europe, US, China and Japan especially. We see fewer Italians though. It’s not a great time right now for Italian stores.” The family-run company, which closed 2018 with sales of 6 million euros, and which has been attending Pitti for around 25 years, gets around 80 percent of its turnover from abroad and the remaining 20 percent from Italy.

British luxury nightwear and loungewear‎ brand Derek Rose was also in attendance and has had a stand at Pitti for the past 20 years or so. “We’ve had a great year,” said Barny Edis, head of sales. “I still think it is definitely the most important menswear show, there just isn’t anything else like it.” The brand said it attended a few trade fairs in the brand’s native UK in the past but had experienced less success, which is perhaps unsurprising considering the country’s current economic landscape. “We’ve seen a definite dip in British customers here, too,” said Edis, “but then we’ve seen a lot more customers from the Far East - a lot from China, Japan, Russia, Ukraine.”

As well as traditional menswear brands, Pitti, like other trade shows, continues to reflect the wider industry’s increasing interest in younger brands and streetwear. Bricktown World is a Paris-based streetwear brand influenced by 90s television, video games and the arrival of the internet through its use of 8-bit video games graphics and pixelated drawings. “It’s been a really good edition of Pitti,” said founder Samuel David Benainous. “Each season I try to do as many shows as possible. I love the idea of trade shows because I want my customers to be able to see and feel the product. I want the whole experience to be real - real meeting, real people, real life.”

In 2015, Bricktown got its first store, Colette in Paris, and has since sold in well-known stores such as Selfridges in the UK, DeBijenkorf in the Netherlands, and La Rinascente in Italy. In SS18, the brand also signed its first collaboration with Nintendo, selling the collection in Bloomingdales across the US. Benainous added that Pitti, being the first show of the season, was a particularly interesting opportunity for his young brand to get a feel early on for the upcoming trends. “Pitti is where a lot of interesting accounts come to discover the new trends of the season, and many of those trends are based on streetwear. There’s a real feeling that a lot of inspiration is to be found here.”

“If you want to be in the industry, you have to be at Pitti - a lot of key accounts come here,” said Marisa Selfa, CEO of Spanish sustainable fashion brand Ecoalf, noting a particular increase in Japanese visitors. “They are hungry for sustainability in Japan, they’re really pushing for that,” she said.

The trade fair opened up a dedicated sustainability section this year for the first time, with sustainable brands taking over the Lyceum. An area called Reflections on the ground floor hosted exhibitions, installations, conversations, and ideas about eco-fashion. One such exhibition was Andrea Caputo’s ‘Land Flag: From Waste to New Materials’, a look at consumption and recycling, with the installation visualising the amount of plastic waste produced in a week by a professional studio of about six hundred square meters in which sixty people work.

“I think it’s great that they’re putting more of a focus on sustainability here at Pitti,” Selfa said. “Sustainability isn’t a trend, it’s here to stay. But you see a lot of brands - mainly bigger ones - doing sustainable capsules but then their whole business model isn’t sustainable. I think it’s really important as we see trade shows adding and increasing the size of their sustainability sections that they make sure to choose brands that are truly sustainable across their entire supply chains.”

Inside the new sustainability section, brands were generally excited at the new refined focused and the growing interest in eco-fashion by buyers, though several noted the general footfall of visitors dropped off towards the top floor of the three-story building.

One brand attracted to the show for the first time this season, partly due to Pitti’s increased focus on sustainability, was British ethical fashion brand Bluebuck. “This is our first time we’ve been to Pitti and it’s been great, we’ve seen some of our best accounts here and some new customers as well,” said managing director Pierre David. “This season I decided Pitti because out of all the fairs it is probably the most international - you see people from all over the world here, not just Italians but Japanese, Chinese, Americans, French buyers.” The brand was founded in 2011 and sells online and through wholesale distribution in physical stores across Europe, the US and Japan.

It was showcasing its sustainable underwear made from organically grown cotton without the use of synthetic fertilisers that degrade soil quality and release greenhouse gases into the atmosphere. The garments are made 100 percent in Europe and its factories, all of which are in Portugal, operate through 100 percent renewable energy. In the past year, the brand has also begun working with recycled fibres, teaming up with Seaqual, an organization which collaborates with fishermen and small charities to remove plastic waste found from the oceans. The brand's swimwear is then made from certified Seaquam upcycled marine waste.

David also noted that, while Pitti was taking strides in the right direction towards becoming more sustainable focused, it still wasn’t as up-to-date as rival fairs such as Neonyt. “Neonyt is more specialised in sustainable fashion and you can really tell by the visitors who you meet there, by the questions people ask there about how the product is made, the attention to detail is very specific - they want to know about traceability and whether garments are certified.”

Gender-fluid catwalks and a wintery wonderland

US outerwear company Woolrich took over Florence’s La Dogana for two days to create an enchanted winter wonderland reminiscent of the snowy landscapes of Pennsylvania where the brand was founded 190 years ago, and showcasing the brands outerwear collections. Additionally, Dao-Yi Chow, the co-founder of New York fashion brand Public School, unveiled his debut collection as creative director for Italian heritage label Sergio Tacchini, in the form of a collection of tennis apparel with a contemporary twist.