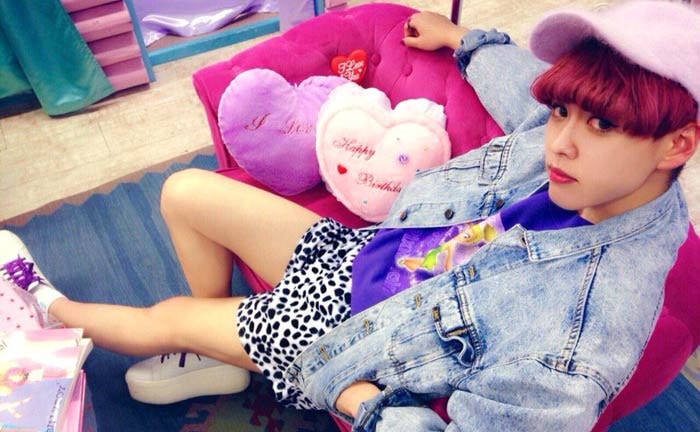 Although women around the world have taken to menswear in droves -- sporting trousers since the 1930s when French fashion legend Coco Chanel put her equestrian clients in pants -- the sight of a man in a skirt still raises eyebrows in the West.

In much of Asia, however, unisex clothing -- whether in the form of a traditional shalwar kameez, sarong or kimono -- boasts a long history, while popular theatrical traditions regularly feature gender bending performances. Genking's long bleached blond locks, curled eyelashes and fondness for both womenswear and menswear testify to a self-professed identity as a "genderless" person.

Born Genki Tanaka, Genking fell in love with fashion at an early age, dreaming of Chanel purses and pastel pink accessories. "My mother was pretty tolerant.... But in those days, I still didn't want to admit my feminine side and I was kind of trying to hide it," Genking said. "When I turned 20, I quit pretending." Genking set up an Instagram account where selfies showcase a style that has attracted nearly 850,000 followers, kicking off a television career and culminating in a catwalk appearance at the packed Tokyo Girls Collection show last year.

In Japan, men play every role during traditional kabuki -- all-male theatre -- performances, while the century-old Takarazuka Revue -- an all-female musical theatre troupe -- sees women slick back their hair and don tuxedos to the delight of adoring female fans. "Gender role play through fashion and performance has always been a big part of Japanese culture," said Tokyo-based style blogger and TV host, Misha Janette.

Local retailers have long catered to a fashion-hungry menswear market with slick tailoring, leather clutches and luxury skincare products. Few young men, however, would have made the leap from watching male actors play women on stage to adopting "girly" accessories and wearing makeup themselves, were it not for the overwhelming influence of Korean pop music and Japanese anime movies.

But while Japanese fashion seeks to overturn convention, commentators say it will take more than men dressed in skirts to transform traditional gender dynamics in the conservative country. "The genderless trend is really a fashion moment, it's not necessarily about sexuality or any social agenda... I don't think a trend like this changes anything for women, it's not empowering (for them)," said TV host Janette.

Japanese activists have staged a long battle to scrap sexist, discriminatory laws while female participation rates in the workforce and political sphere are among the lowest in developed nations. Nevertheless, proponents of "genderless" fashion are optimistic, pointing to the rising visibility of LGBT icons like Caitlyn Jenner, the transgender Olympic champion formerly known as Bruce.

Meanwhile, in a nod to the trend's growing reach, retail giant Zara last week launched a unisex line of sweatshirts, tank tops and sneakers called "Ungendered". "(The LGBT movement) is a global movement that we cannot separate from fashion... I think this free way of thinking is suited to modern society and (its) fashion," said Ota. For "genderless" fashionista Genking, the playful style heralds the dawn of a new age. "The gender boundary is disappearing... Japan is still conservative, but I think we will see more men open up to genderless culture," Genking told AFP. "How you dress is how you live." (AFP)