Dior staged arguably the most startling show in haute couture history Monday inside a temple to "The Female Divine", with stars including Uma Thurman and Sigourney Weaver filing into the belly of an enormous reclining mother goddess through her stylised vulva.

The 75-metre long (250-foot) installation was created by the veteran American feminist artist Judy Chicago, who told AFP: "We walk in the way we came out."

Its womb-like interior was hung with embroidered banners asking what life would be like "if women ruled the world".

"Would men and women be equal? Would there be violence? Would old women be revered?" asked the pennants, which were sewn at a women's embroidery school in India, where the art is a male preserve.

Dior's designer Maria Grazia Chiuri -- the first woman ever to lead the fabled French fashion house -- has made female empowerment a pillar of the brand, launching her reign in 2016 with a T-shirt reading "We should all be feminists."

"Women's power is not just reproduction, but the power to create," the Italian told AFP as she sent out a breathtaking pantheon of Greek goddesses in shimmering draped diaphanous gold and ivory creations. 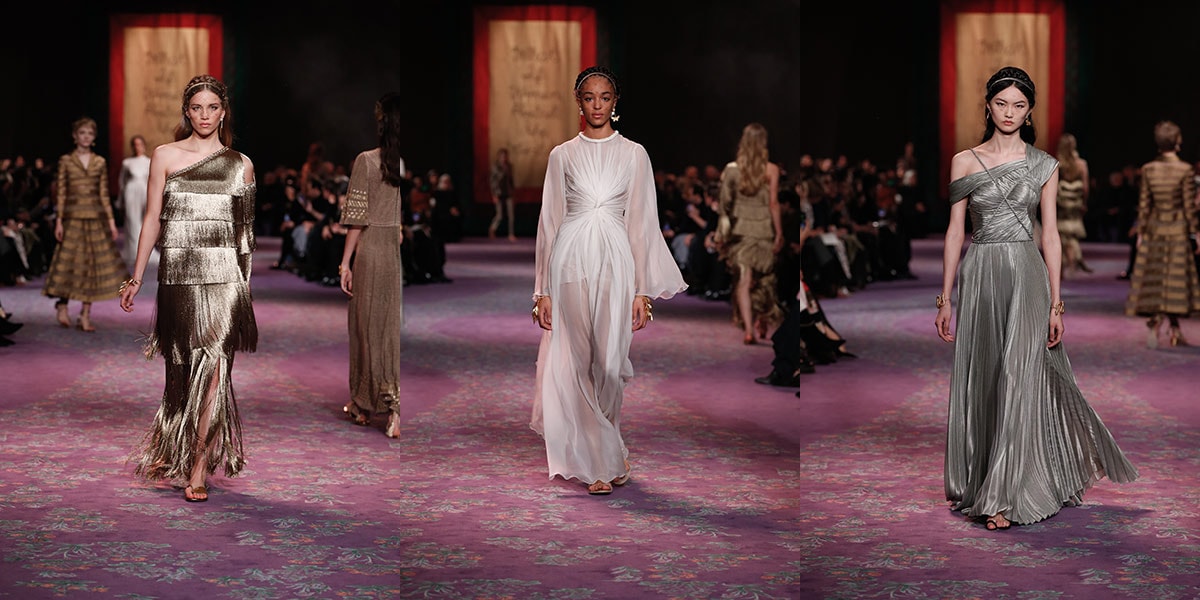 A cape fit for Cleopatra

The collection wowed critics who said it harked back to haute couture's halcyon days in the Roaring Twenties, with Vogue hailing "its embarrassment of riches".

Inspired by the peplos robes of ancient Greece and the classical statues, Chiuri used rope and knot motifs to tie her vision of classical "Botticellian beauty" to women who have taken destiny by the lapel.

Nothing said that more than the feathered cape fit for Cleopatra herself worn by the Dominican supermodel Lineisy Montero.

"We want to celebrate the divine aspect of women and their power," Chiuri said.

Women can create their own gods and role models, she insisted, as she sent her modern Athenas and Artemises down an imperial purple carpet of "one thousand flowers" that Chicago imagined as a tribute to Eleanor of Aquitaine, the medieval ruler of France and England.

"The real problem is that we don't think (as women) that we can dream," Chiuri added.

"When I started out in fashion I never thought it would be possible for me to be here, but it can happen. Where does this (blockage) come from?" the designer asked.

"Doing this collaboration with Judy (Chicago) is also a way of telling young women that there are references in art and fashion for them -- people who have gone before them.

"You can do it -- your life is not predetermined to be a mother. I am very happy to be a mother, but it is not the only thing that I am. I am also a creative director, a wife, a friend," Chiuri added. 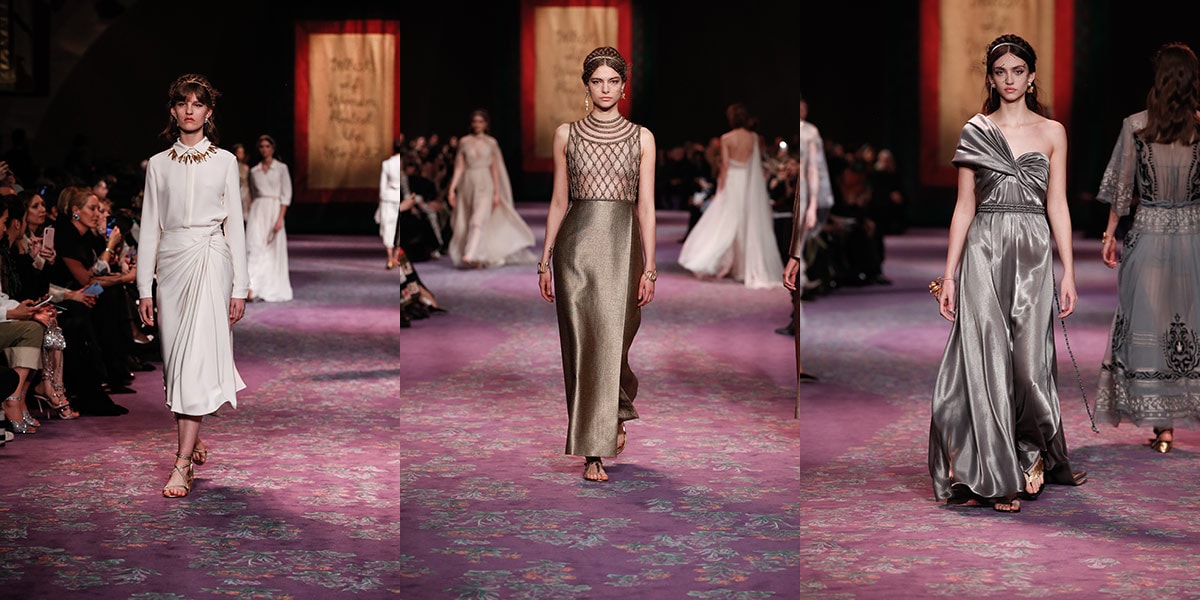 With that in mind, the designer replaced the traditional wedding dress that finishes haute couture shows with a staggering bodiced creation showing a rising moon armoured with "a sea of pearl beads".

More than 1,500 hours of painstaking work went into the piece, Chiuri said, with several others woven and fringed with gilded wire to catch and dapple the light taking just as long.

Chicago is best known for her epic work "The Dinner Party" -- three tables set for 39 great but often forgotten women from history, from the Primordial Goddess to Ishtar, Kali and the novelist Virginia Woolf.

The artist said she had dreamed of building her temple to "The Female Divine" since 1977. 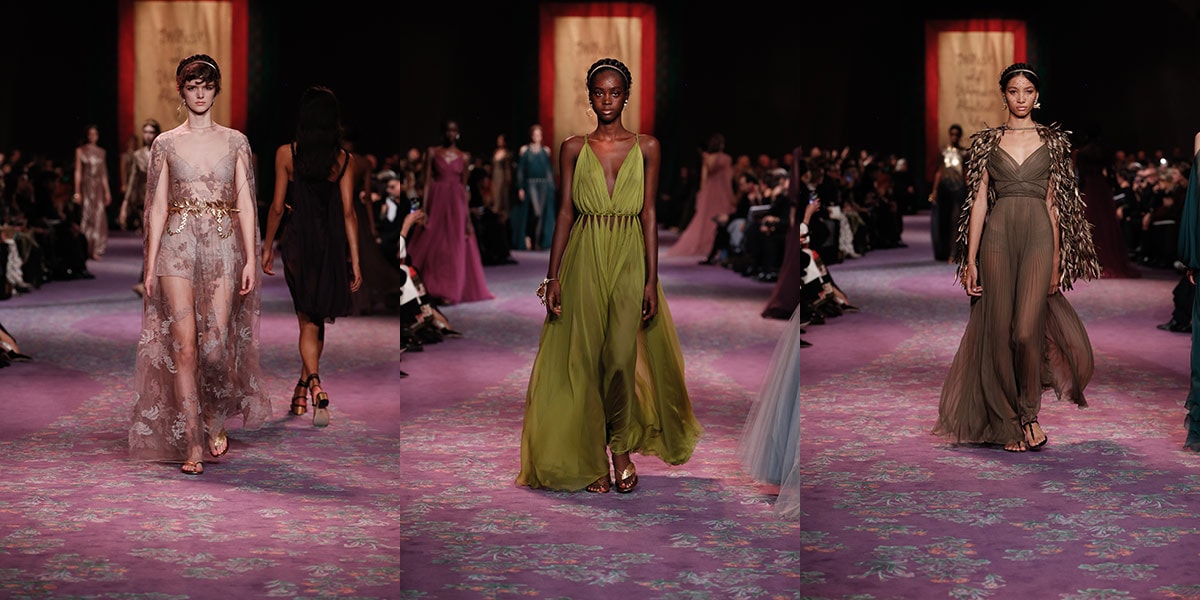 Finally being able to make it was "the greatest creative opportunity of a lifetime", the 80-year-old said.

The work will be open to the public Tuesday for five days.

That Chicago's goddess is parked on the lawn of the Rodin Museum in Paris, which celebrates one of the most macho of sculptors, adds a further frisson.

Feminist critics have never forgiven the French artist for his treatment of the sculptor Camille Claudel, his lover and model, who many argue was his equal artistically.

The Dior show kicked off the week of haute couture shows, which are unique to Paris.

Regarded as the pinnacle of fashion, some of the world's richest women pay tens of thousands to be dressed by the little more than a dozen designers who are allowed to use the label under French law.(AFP)