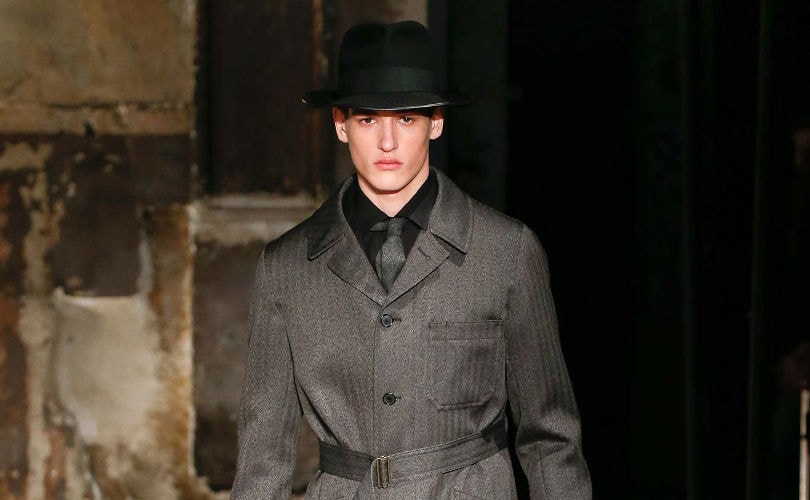 Comme des Garcons Homme Plus saw its designer Rei Kawakubo collaborate with tattoo artist Joseph Ari Aloi featuring a scrambled pattern of mostly illegible words, as seen on leggings and all over a fitted suit. If you looked closely you could see “Born to Die” within the print. Else where Kawakubo presented her usual challenging of silhouettes, such as asymmetric and jagged cut double breasted blazers, all part of a show that presented the ritual and ceremony of having a tattoo inked into your skin.

On a set that was curated as an antique shop and featured a red glitter catwalk, Givenchy's collection was full of curiosities. Models were bejewelled with shells, rhinestones, metal discs and pearls, stuck directly on to the skin by makeup artist Pat McGrath. Inspiration was as eclectic as a shop: urban, couture, skulls, romanticism, mixing different cultures, and different eras designer Ricardo Ticci stated. In the clothes this reflected in stark tailoring featuring red contrast piping, or a Mexican carpet print on slick suiting and separates.

There was a hint of Don Corleone in the opening look of Cerruti's AW15 presentation, with the model wearing a belted grey overcoat and black felt hat, but designer Aldo Maria Camillo referenced his muse not as mafia but artist Joseph Beuys. The clothes were luxurious and commercial, with mostly wardrobe staples containing sharp coats and precisely-cut suits. Stand out pieces included a bonded Prince of Wales hemmed with leather, shooting-patch jackets with more trim at the pockets and cuffs, or a carpenter's coat in suede and ridged drill cotton.